The economic end of the United States: and forecasts are still not justified ... 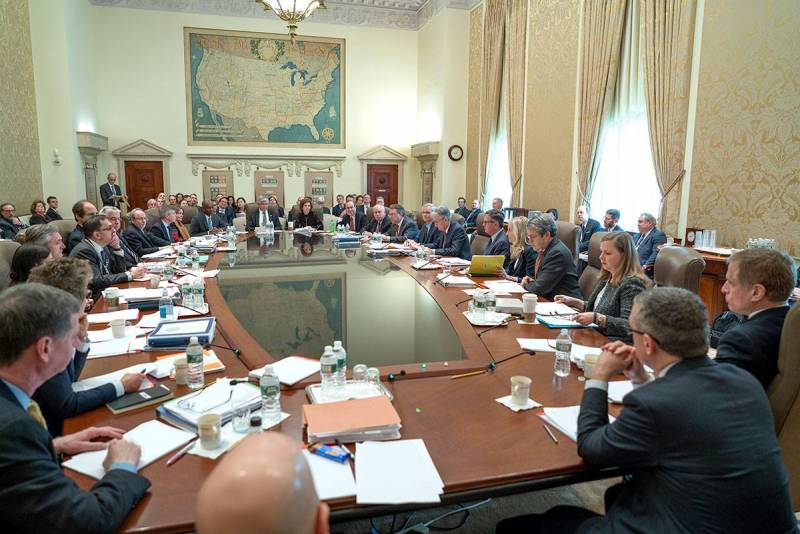 In connection with the powerful crisis that has now hit the United States economy, forecasts again begin to sound about the collapse of the American financial system, the “sunset of the dollar era”, etc. It is difficult to say how many times we have heard such “prophecies”: in 2008, the time of the mortgage crisis that struck the United States, before. Nevertheless, the "magic" Fed press continues to work just as well, over and over again, not only fulfilling its mission to save the American economy, but also continuing to maintain world dollar hegemony. Why is this happening?


First of all, it must be recognized that the pawn first in Bretton Woods in 1944, and then in Jamaica in 1976, the global system of financial relations created such a tricky comprehensive basis for the global dominance of the American currency, which replaced the noble gold as the universal standard of world money, that the destruction it is not beneficial to anyone. Even the most violent haters of the United States and their many opponents of the trade wars do not seem enough, tomorrow will turn dollars into a pile of worthless green pieces of paper.

Moreover, all the negativity regarding dollars that wanders from one article to another (regarding their revaluation as the main global reserve currency, their complete lack of security both in the US gold reserve, in the volume of goods and services produced in the country, and so on) is completely fair. Moreover, the allegations that the gigantic national debt of the United States, which has crossed the mark of 23 trillion dollars, are a thing completely abnormal from an economic point of view, and in no way testifies to the financial "health" of the country.

The whole thing is that the American dollar has long been something more than even a global reserve currency and a monetary unit in which more than 50% of transactions are made on the entire planet. In fact, it is a kind of pivot on which the entire system of not only commodity-money and financial relations is “strung”, but also the political and social structure of the whole society in which we live. That is why the United States can afford to accumulate any debts and at the same time feel great.

Standing not just outside, but over the American state, the Federal Reserve does not cost anything to issue the national currency in any amount, covering all possible deficits, interest and other US needs. Any other state that has thrown money of a similar volume into its own economy would simply have choked in it, drowned in imminent hyperinflation and died. But not the United States - after all, the green papers they print instantly disperse around the world, they turned into the main article of national export a long time ago.

Yes, a number of states (the same China or Japan) today have in their hands US debt in such volumes that, if they demand repayment of not all loans overnight, but just a significant share of them, the American state will inevitably turn into bankrupt. But they won’t do it! At least in the current coordinate system ...

Who will buy Japanese cars, Chinese smartphones and many thousands of other items of goods produced exclusively for external consumption, if the dollar does not become, and the United States, the largest world market with almost bottomless consumption, goes bankrupt? And how to continue to conduct business between states without a monetary unit acceptable for settlements everywhere and by all? Naturally, over time, any vacuum will be filled - with another currency or the same gold as the old, but it's hard to imagine what kind of economic desert our world will turn into during this time.

The Fed’s “game” with the printing press can be stopped only by setting the goal of not only depriving the dollar of world currency status, but also firmly intending to “move” the United States themselves from all-planet hegemons. Enough courage, and, most importantly, forces like that, can be for a group of states that have both significant economic potential and military power so impressive that none of the American leaders have a glimpse of using the "last argument of the kings." China, India, Russia ... And who else? A lot depends on how the European Union, Japan and South Korea, which are so far faithful US allies, will behave. And will the countries that have decided to “overthrow” the dollar be able to maintain unity in the face of imminent trials?

All these questions seem to be rhetorical. Nevertheless, the current difficult economic situation, and even in combination with the global pandemic, is able to give rise to completely extraordinary scenarios. The "anti-dollar revolution" may well become one of them. But this is just another forecast of dozens of these over the past decade. But they didn’t come true ...

We are in Yandex Zen
Results of the week. “In our cooperative, the board is always agreed”
How the US dollar turned into a big financial mystification
97 comments
Information
Dear reader, to leave comments on the publication, you must to register.