How the panic fanned during the epidemics of recent years 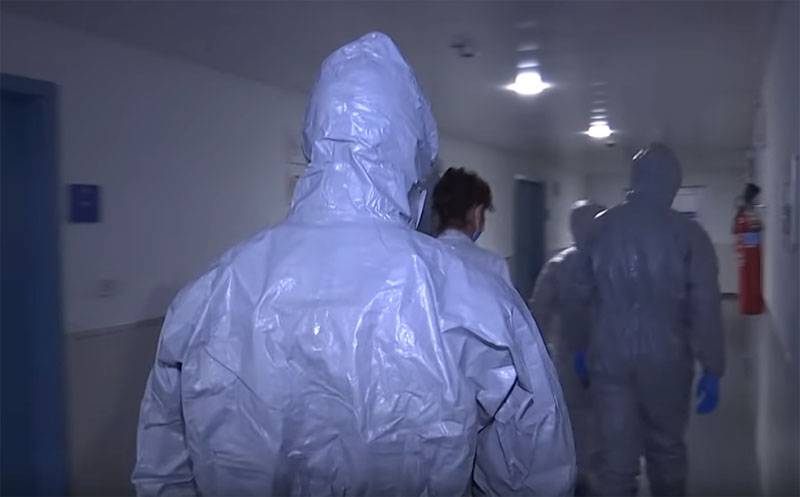 As long as humanity exists, it naturally suffers from it. At the same time, diseases periodically cover a fairly large number of the inhabitants of our planet, turning into epidemics and pandemics. It has long been known that such massive outbreaks are invariably accompanied by panic, hysteria, the spread of the most incredible rumors and predictions. It is worth recalling how such things happened during the latest invasions of viruses, which received the most widely publicized information in the world.


Let us dwell on the three most striking cases: epidemics of SARS or SARS, Ebola virus and swine flu H1N1. To begin with, we can distinguish a certain general scenario of escalating hysteria around all these diseases, which does not change from time to time.

In a certain "distant" country, a hotbed of infection suddenly arises, which they immediately begin to declare: they say that the disease "has no analogues", "doctors have never encountered anything like it," "it spreads fantastically fast," "it is deadly like never before" .

Subsequently, as a rule, it turns out that we are dealing with a slightly modified strain of the virus that has long been known to science, the mortality rate from which does not significantly exceed the lethality of ordinary seasonal flu, and the infectivity is exaggerated several times or even orders of magnitude. But the thing has already been done: the unhealthy in the most literal sense of the word interest in the world media audience has been aroused, the first seeds of panic have been sown.

No one will argue that SARS (SARS), which began to spread from China in 2002-2003, first to countries in Southeast Asia, and then around the world, was a dangerous disease. No wonder the World Health Organization sounded the alarm, warning of a possible pandemic (albeit somewhat belatedly). However, less than 9 thousand patients in 29 countries and 774 deaths ended up. At the same time, incredible passions reigned in the world: the apocalyptic predictions that a new ailment would mow almost half of humanity sounded every day. Especially terrible panic, by the way, reigned in China itself. Bats (which turned out to be a source of infection) were exterminated by tens of thousands, not sparing even some other representatives of the fauna under a hot hand. Throughout the world, the media wrote about "huge pits in which the celestial authorities secretly burn tens of thousands of corpses." In reality, of course, there was nothing of the kind.

In 2009, the swine flu arrived. His focus was identified in Mexico, which greatly strained the neighboring United States. The rest of the world, however, too. In this case, WHO did not announce the possibility of a pandemic, but its “fait accompli”. On the one hand, there were certain reasons for this: H1N1 had more than 250 million people, of whom more than 26 thousand died. However, after the hype raised to heaven, WHO officials faced a flurry of accusations of inflating fears and unfounded allegations of the magnitude and danger of the disease. In the end, as it turned out, the lethality of swine flu was no more than that of any other strain of this disease. The Germans were especially offended: the governments of their federal lands bought up almost 240 million euros of “miraculous vaccines,” which they then did not know what to do.

Subsequently, against WHO, which injected forecasts of a pandemic (one darker than the other) into horsepower into the information space, it was accused that all these calculations were born by analysts who supported pharmaceutical companies. Most of all they sinned at the Swiss pharmaceutical company Roche Holding AG, producing the drug Tamiflu. WHO recommended many countries to create “strategic reserves” of this drug. The claims were very serious and reasoned, supported by, for example, the British Medical Journal, as well as other authoritative publications and organizations. But somehow it worked out ...

A new wave of horror swept the world at the word Ebola. Another "super-illness", which, of course, "will kill us all." A particularly mysterious and gloomy halo of the virus was given to its African origin, and panic was aggravated by chilling stories of "eyewitnesses", intensely circulated by the media. Why didn’t they tell us about this disease! And the mortality rate from it is almost 100%, and it spreads faster than a forest fire, and of course it is “impossible” to cure it. It came to paranoid horror stories like stories that those who died from Ebola ... turn into zombies and attack people! It was, it was, and not only in the yellow press.

In Europe, the inflated people have reached such a limit that, for example, the French Ministry of Health was forced to open a “hot line”, where people of the country who were especially concerned about the nightmarish prospects of the pandemic could call to pour out their fears and simply “take an interest in the situation”. In the end, it turned out that this disease, with the exception of completely isolated cases, does not go beyond the "black continent", is not transmitted by airborne droplets, and generally does not have such a wide spread even in Africa itself. The reason for both high mortality and mass infection in a very definite number of regions is the extremely low level of sanitation and medical services. Mass extinction did not happen.

Do you know which, in my opinion, the most terrible of the consequences of all these waves of global panic, which invariably turned out to be either groundless or incredibly exaggerated? The very thing that is specifically described in the parable about the cowherd boy who screamed heart-rendingly: “Wolves!” In order to attract attention. When the predators really came, his screams simply ignored ... Perhaps if in the last couple of decades the world had been less frightened by the “deadly pandemic”, which in reality turned out to be not so deadly and not at all a pandemic, then at the beginning of this year he (the world) more quickly and efficiently respond to the emergence of a truly serious threat - COVID-19. What can you do now. It remains only to draw lessons for the future.

Ctrl Enter
Noticed a mistake Highlight text and press. Ctrl + Enter
We are
Influenza in Russia. What threatens public health and why not panic?Ebola fever turns into a threat of international importance
131 comment
Information
Dear reader, to leave comments on the publication, you must to register.