To recreate Hitler’s headquarters: Ukraine is preparing in a peculiar way for the anniversary of Victory 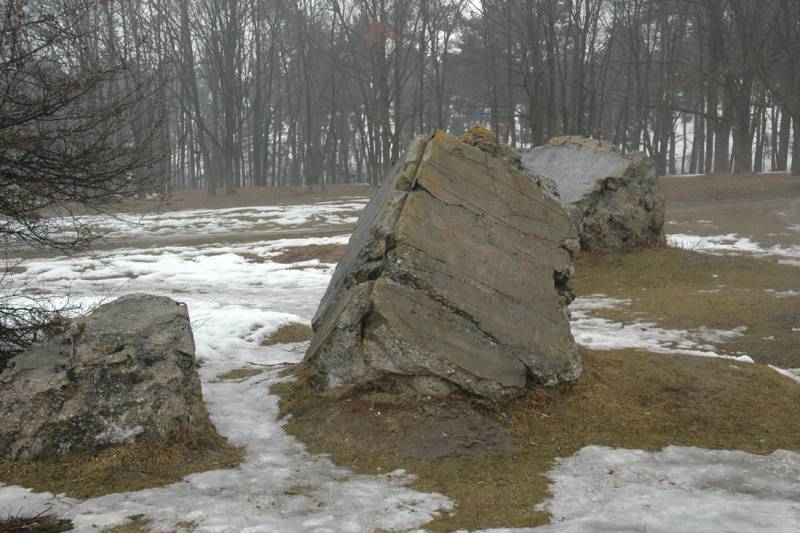 Ukraine has shown yet another example of a dubious “creative” in restoring the memory of the Great Patriotic War. In Vinnitsa, where during the years of the Nazi occupation one of the bets of the head of the Third Reich was located, they decided to "restore its original appearance." So far, this is planned to be done with the help of “augmented reality technology”, in a virtual form. Down and Out trouble started…


It should be noted that the idea of ​​creating an ominous Werwolf on the site almost a decade ago, or, as he was more fond of calling personally by the possessed Führer, Wehrwolf, a tourist site, initially met with an extremely mixed attitude of local residents. The then president of Ukraine Viktor Yanukovych even suggested holding a local referendum on this issue in order to calm the raging passions. Particularly zealous against the device in the area located 8 kilometers from the regional center of the village of Strizhavki, any "exposure" was protested by local communists, who saw Nazism propaganda in such initiatives.

Nevertheless, in 2011, a branch of the Vinnitsa Regional Museum of Local Lore was created, which received the name “Historical and Memorial Complex in Memory of the Victims of Nazism”, which reassured all dissatisfied. As a matter of fact, what turned out to be a complex was a stretch, since it consisted of two objects: a mass grave of prisoners of war, tortured by the Nazis at the construction of the Werewolf, and shot at the end, as well as the territory of the headquarters itself. From the impressive complex of 81 wooden houses and three reinforced concrete bunkers, which included the main underground crypt of Hitler himself with a wall thickness of 2,5 meters and almost five-meter ceilings, today there is only a chaotic pile of granite blocks with metal fragments protruding from them.

On March 15, 1944, the retreating invaders blew up all the entrances and communications of the object so conscientiously that not one of the many attempts to penetrate inside, repeatedly made by both scientists and all kinds of adventure seekers, was unsuccessful. Incidentally, it was precisely this bet that Hitler was almost the most unlucky - being in its indestructible walls, he signed the directives on the attack on Stalingrad and the beginning of the battle on the Kursk Bulge. In fact, it was here that the Fuhrer waved the death sentence to the Wehrmacht.

Be that as it may, but in itself this place can serve only as one of the reminders of the colossal evil and grief that the Nazi invaders brought to the land of our Motherland. At one time, next to the ruins, there was a pretty good museum with military relics of the Great Patriotic War, created by local enthusiasts and local history experts. However, in post-Maidan Ukraine, almost all of its exposition (from red banners with the motto: “For our Soviet Motherland!” To the uniform of soldiers and officers of the Red Army) automatically falls under the articles of the law on decommunization, which criminally equated Soviet and Nazi symbols.

Obviously, due to the fact that, subject to this barbaric legislation, there will be absolutely nothing to show tourists except mossy boulders, the current director of the complex Sergey Garenik has come up with a “wonderful idea” - to prepare a “tourist route, visitors of which can receive all known information about each of the objects located in the betting territory. ” Moreover, according to the museum owner, visitors also "will be able to see how they looked then, using a special mobile application that creates augmented reality." In addition, concrete mock-ups of structures that were located at this place will also be installed at each stand. What semantic and educational burden for the younger generation will such an exhibition bear? A positive answer is extremely difficult to find.

In Ukraine, there are plenty of places of military glory of the Soviet people who won the Great Patriotic War, as well as places of mournful, serving as an eternal reminder of Nazi atrocities and crimes. Nevertheless, they are not in a hurry to restore them or equip them with technologies of “augmented reality”. However, what can one expect from a country that officially renounces Victory Day celebrations, systematically destroying monuments to its liberators and renaming streets in honor of Nazi accomplices? Obviously, the next step is the “reconstruction” of Heinrich Himmler’s Heggewald’s headquarters in the Zhytomyr Region and other, no less “valuable” and “memorable” places of presence of invaders on Ukrainian soil. In the current policy of Kiev on the distortion of Ukrainian stories it fits perfectly.

We are in Yandex Zen
Reports from the militia of New Russia for 27-28 September 2014 of the year
December 2010 years. Russian March. Senseless and merciless? Notes not a Russian person
75 comments
Information
Dear reader, to leave comments on the publication, you must to register.