What place does Russia occupy in the global machine tool industry 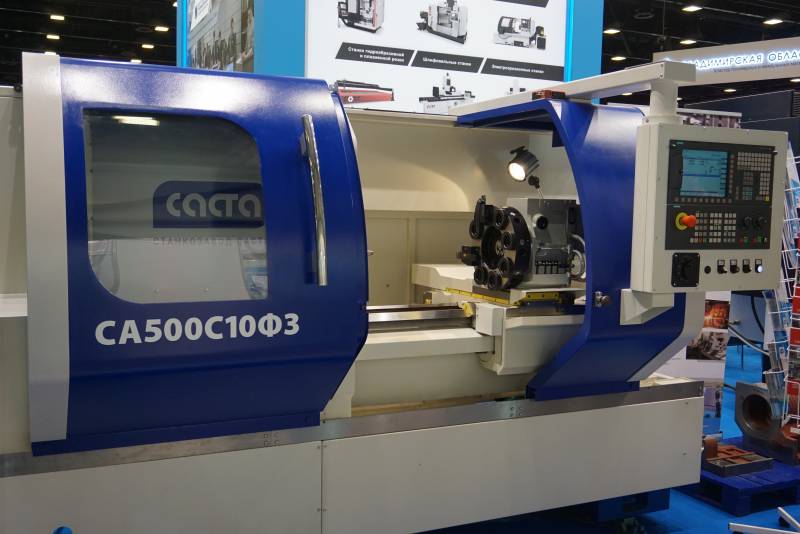 Speaking about the level of development of machine tool industry in the country, we are, in fact, talking not so much about a separate industry as a major indicator of the economic development of the state, which very clearly describes the level of its growth or, on the contrary, degradation.


Countries with a "killed" industry do not need any machines for nothing. If a country does not manufacture or at least does not import a certain range of equipment, its affairs are bad.

It should be noted that inviting someone to guess the state, which is the absolute world leader in the production of machine tools, is obviously a losing business. China, of course. Developing their own national economy, the comrades from the Middle Kingdom initially sought to achieve as little as possible dependence on other people's technologies, and they succeeded completely. Moreover, the country is increasingly shifting the center of gravity in the development of this industry to the production of sophisticated (smart) industrial machines - automated, with computerized control.

Together with China, Japan and Germany are among the three world leaders in the production and, consequently, export of machine tools. They account for at least half of the output of these products worldwide. The United States, South Korea, Italy, Taiwan, Switzerland follow them behind (at least twice). The share of other countries is estimated at a percentage and a half, or even less.

What is characteristic, the same China, the United States, Germany top the list of not only exporters, but also importers of machine tools. Nothing surprising here, however, is not present: modern industrial machines and mechanisms have already achieved so much narrow specialization that it is often even easier for a very developed country to purchase some very rare machine tool in small quantities abroad than to spend money on its own development and production.

And what about Russia? In truth, so far there are no special reasons for joy and pride.

In the Soviet Union, machine tool building was developed at a very high level, but then ... We all know what happened next: the total de-industrialization of the country and the collapse of everything that could be destroyed. The production of machine tools alone during the 90s was reduced by 15 times. The situation is even worse on the most advanced of the areas - the creation of the most advanced numerically controlled machines (CNC). In 1990, in the RSFSR alone, about 17 thousand of them were released. By the end of the “dashing 90s” the output was reduced by 167 times!

In fact, production growth in this industry has been outlined literally in recent years. Directly, it can be associated with the revival of the armed forces, a new impetus for the development that the military-industrial complex of Russia received. According to domestic manufacturers of modern industrial equipment, it is precisely enterprises of the military-industrial complex that account for at least 80% of the orders they receive. Russian machine tool building, though little by little, is being reborn. It is alarming that this is mainly due to the growth in the production of machine tools of low complexity, with which no breakthrough can be made either in the development of innovative technologies or in real import substitution. So, the production of all the same CNC machines in the period from 2016 to 2017 showed an increase of only 270 units (according to the association "Stankoinstrument"), which, of course, is not a sufficient indicator for a country like Russia.

Today, Russia's place in the global machine tool industry is, to put it mildly, modest. Last year, Russia was not in the top twenty. Ahead is not only the industrial giants of the world like China and the USA, but also such countries as Austria, Spain, Brazil. The Russian position in the general list usually fits into a percentage share with the designation "and other countries."

But worthy of development, in need of implementation, domestic experts in the field of machine tools are available. Nevertheless, one should not forget that this industry is impossible without attracting both a significant amount of material resources and highly qualified personnel. To ensure all this is real only at the state level. And this is absolutely necessary to do!

Striving for the development of the Russian economy, it must be understood that its growth will not happen without the powerful development of machine tool industry. This industry is "backbone", because we are talking about the production of means of production, the true foundation of the entire domestic industry. Without this, all the talk about "import substitution" and the deliverance of Russia from raw materials export dependence will remain talk.

We are in Yandex Zen
Situational analysis of the death of the MH17 flight (Malaysian Boeing 777), made on the basis of engineering analysis from 15.08.2014
Results of the week. "God forbid to see Russian revolt, senseless and merciless!"
319 comments
Information
Dear reader, to leave comments on the publication, you must to register.