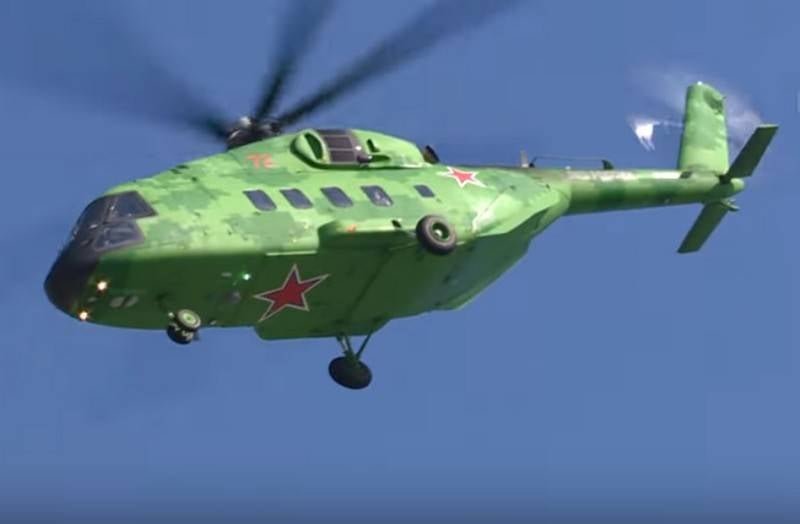 The Ministry of Defense decided to create a command post based on the latest Mi-38 helicopter. The creation of a new machine should be completed by next spring. This was reported by the Russian military department, Izvestia reports.


As explained in the Ministry of Defense, the new air command post (VKP) based on the Mi-38 helicopter will be able to receive and process information on the progress of hostilities in real time, coordinate the actions of various arms of the armed forces on a district or interspecific scale. A modern control system will be installed on the helicopter, which one is not called. In terms of tasks, the new CPSU should be similar to strategic command posts on the basis of aircraft - the Il-80 and Il-82 (Doomsday aircraft). Of course, a helicopter will not be able to replace the aircraft either in range or in other capabilities, but it will be able to complement and facilitate the work of the aircraft-type VKP.

To ensure its own defense, the CPSU on the basis of Mi-38 will receive the Vitebsk L370V38S airborne complex. The basis for the development will take the option already used on the upgraded combat Mi-35M. Testing of electronic warfare equipment, manufacturing and delivery of the first three sets for equipping prototypes is planned in early 2021.

The creation of special versions of the Mi-38 for particularly demanding tasks was announced in May last year by Deputy Defense Minister Alexei Krivoruchko.

Currently, Russia has several air command posts, but not a single one based on a helicopter. The Ministry of Defense has IL-80 (based on the passenger liner IL-86) and IL-82 (based on the transport IL-76). Also, since 2018, work has been ongoing on the modernization of five IL-22s, bringing them to the level of a multifunctional air command post. In addition, a new VKP is being created on the basis of the modern IL-96-400.

The Mi-38 medium multipurpose helicopter occupies a niche between the Mi-8 and the heavy Mi-26 and can be used to transport goods and passengers, used as a search and rescue helicopter, as well as for flights over the water surface. Mi-38T (airborne assault) is a military version of the Mi-38. It is intended for round-the-clock air transport of personnel of up to 40 people with disembarkation at unprepared sites, evacuation of the wounded (up to 12 people in a lying position and up to 30 in a sitting position, accompanied by two medical personnel), transportation of goods weighing up to five tons in a cargo compartment or on the external sling.

The flight range of the Mi-38T in the transport configuration is up to 1000 kilometers (with additional fuel tanks). The maximum take-off weight is 15,6 tons. The maximum speed is 300 km / h. Flights can be operated at altitudes of up to 6300 meters.

We are in Yandex Zen
The Doomsday American aircraft "Night Watch" showed inside
US Air Force nearly lost one of the Doomsday aircraft
18 comments
Information
Dear reader, to leave comments on the publication, you must to register.