Will the robot become the protagonist on the battlefield 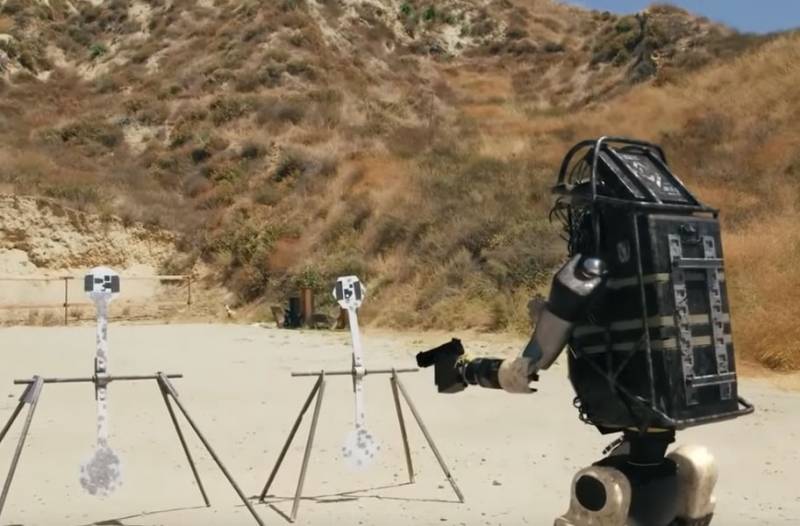 Robots on the battlefield. From a dozen or two years ago, it looked like the script for the next science fiction film.


In 2020, the Kungas family of robotic systems (RTKs) will enter the pilot operation of the Russian armed forces, the press service of the Russian Ministry of Defense said.

The Kungas family consists of five vehicles of various weights and sizes: a portable wheeled robot reconnaissance weighing 12 kg, a light robot (200 kg), a portable RTK (up to 2 tons), a Nerekhta crewless platform (about 1 tons) and a robotic version armored personnel carrier of the airborne forces BTR-MDM "Shell" (more than 13 tons).

The development of these samples involved more than two dozen domestic enterprises. Wearable robot created in the MSTU. Bauman, light - a product of the Kovrov Plant of V.A. Degtyareva. " At the same enterprise, together with the Advanced Research Foundation (FPI), they developed the Nerekhta crewless platform. The transportable RTK made the Kovrov Electromechanical Plant. Kurgan "Special Design Bureau of Mechanical Engineering" produced a robotic version of the BTR-MDM "Shell".

Robots are controlled from a single command post located in KUNG (hence the name “Kungas”) of the KamAZ-63501. In some cases, you can use a special tablet. All products of the family, except the reconnaissance robot, are equipped with fire weapons. They can work, both together and for individual tasks.

Now the Kungas family of robots needs to earn recognition in the army, which has already received the Russian robotic systems Uran-6 and Uran-9. Both of these complexes took part in the Victory Day parade on May 9, 2018. The American magazine The National Interest called them "revolutionary new."

Uranium-6 works to clear the terrain and create passages in minefields. It was used in the clearance of the Syrian Palmyra. In the same family there is a robot-sapper "Uranus-10". It has more powerful functionality that allows you to mine anti-tank mines weighing over 10 kg.

The crawler robotic complex "Uran-9", designed and manufactured by the Nakhabinsk "OJSC" 766 UPTK ", also passed a combat test in Syria. He was decently criticized for his shortcomings, but the developers (according to the assessment of the deputy chief of the General Staff, Lieutenant General Igor Makushev) were able to eliminate them. Now The National Interest calls Uranus-9 "the opening era of unmanned tanks».

Terrestrial robots, unlike unmanned drones, encounter large obstacles on the battlefield. First of all, these are the folds of the terrain, forest, buildings and engineering structures that interfere with the command radio signal. For ten years now, Americans have been developing a product similar to Uranus-9, but have not yet caught up with Russian designers. They will deliver their first samples to the US Army no earlier than 2021.

The combat "Uranus-9" is equipped with a 30 mm 2A72 cannon, four anti-tank guided missiles "Attack" and a flamethrower "Bumblebee". The complex allows you to effectively hit manpower and armored vehicles of the enemy.

In recent years, many domestic special design bureaus engaged in combat robots. Even the illustrious Kalashnikov concern was distracted from the shooting theme and produced a whole line of robots - Companion, Nakhlebnik, and Igoryok. "Companion", for example, is a combat module on a remotely controlled tracked platform with machine guns of 7,62 and 12,7 mm and 30 mm caliber grenade launchers of the AG-17A type.

And here is a recent example. As Army Commander-in-Chief, Army General Oleg Salyukov said, in 2020 development work on the Sturm project will begin. It includes a promising family of robotic systems, consisting of four samples. The heaviest vehicle (50 tons) will be created on the basis of the T-72B3 tank.

It is planned to install a 125-mm D-414 gun with a shortened barrel, a bulldozer blade and a set of all-round protection against anti-tank weapons on this RTK. The remaining samples of the Sturm project will be equipped with Bumblebee-M flamethrowers, 30-mm 2A42 automatic guns, unguided rockets and a PKTM machine gun. The project is being developed by Uralvagonzavod Corporation.

We are already starting to get used to such robotic complexes. Fantasy goes further - to cyborgs and avatars. Here, designers have so far limited themselves to an exoskeleton. Its development has been conducted since 2011. Two design options have already been tested. Passive exoskeleton - articulated lever mechanical frame, unloading the fighter’s musculoskeletal system when carrying goods weighing up to 50 kilograms. It will be combined with second-generation Warrior gear.

An active exoskeleton is considered promising - with electric motors and a battery. It increases the physical capabilities of a soldier. Allows you to carry weight up to 200 kg, while conducting active hostilities. This exoskeleton has already been tested, and now it is being finalized. It is expected that he will appear in the arsenal of the Russian military by 2025 along with the equipment of the third generation Ratnik-3.

Experts differently evaluate the combat capabilities of incoming troops and promising robot systems. At the same time, many agree that robotics are already reversing the principles of modern combat, but at the same time, robots are still far from replacing 100% robots with robots. Therefore, the main character on the battlefield, the robot, even if "armed" to the teeth, will certainly not become in the coming years. But with time...

We are in Yandex Zen
Robotization of industry: the threat of unemployment or the foundation of the economy of the future?
BTR-4 for the National Guard of Ukraine
48 comments
Information
Dear reader, to leave comments on the publication, you must to register.