To remember. My native women in the war 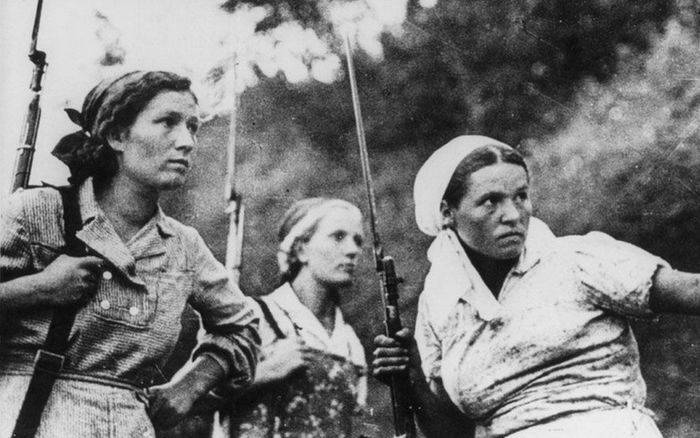 March XNUMX. International Women's Day, as well as a holiday from childhood, when gifts are given to girls, and to mothers and grandmothers - tulips, sweets ... Women, our halves. They were always with men, supporting us at all the sharp turns of life, in sorrows, difficulties and ... And in the war.


Lyudmila Pavlichenko, Marina Raskova, Julia Belousova. Films were shot about some of them, books were written, songs sung. The remaining hundreds of thousands who did not accomplish feats, but honestly performed combat duty on the front and rear, were awarded with honors, diplomas, and folk memory. And there were still millions who forged a victory in the rear, nursed the wounded, and taught future soldiers and officers. You will not remember everyone. But each person has his own memory cell, which stores the images of the closest women - mothers, daughters, grandmothers.

A few months ago I wrote an article about the fighting everyday life of my two grandfathers. Probably, now, on the eve of March Eighth, the time has come to remember their halves - my grandmothers.

Anna Alekseevna was born in 1915 in a peasant family, in the Yaroslavl region. In 1938, she married a young foreman who had come for a visit. The young commander drove off to a new duty station, where, after some time, she also gathered.

From the memoirs of Anna Alekseevna:

I got out of the car onto the platform of Medvezhyegorsk, I look around, there are a lot of people, but Peter is not! How so? He himself gave a telegram, what will he meet? I’m looking, two young officers are looking at me. Fit ...

“Are you such and such?”

- And what happened to him?

Two days before your arrival, there was a skirmish on the Finnish border - drunk young guys started to bully our patrol. A brawl ensued. Help was drawn to the tipsy Karelians, and the unit located nearby at the workplace hastened to the rescue of our fighters. Well, he got into trouble ...

At thirty-ninth, a daughter was born. In the forties, a son. On June 22, the family was in a military town near Minsk. In addition to the head of the family, who was in summer camps near the border. The wives of officers with children and "disturbing" suitcases hurried along the road to the east. At some point, they drove them tank column, but then she turned away from the highway, and the women had to dismount. Then there were air raids. Bombs, machine-gun fires ... The emka drove towards, the officer said that there was no point in going further - the Germans were already there.

Women decided to return. Suddenly, one heard their name by name - on the side of the road lay a wounded nachfin of the unit in which their husbands served. They helped, but the wise officer knew that the wound was fatal, and therefore he was in a hurry to give the last instructions. Strictly forbidden to mention that they were officers' wives, advised me to switch to maiden names. In the end, he opened his briefcase and gave them bundles of money, instructing them not to change much, so as not to arouse suspicion. Then he burned the lists and ... shot himself.

Minsk met young women with chaos, running around, vanity and fires ... Soon the Nazis captured the city. I had to get registered, get a job. All for their sake - children.

Anna Alekseevna was assigned to work in the fields where vegetables were grown for the German army.

There were two local overseers. Changed every other day. And the old German colonel was in charge of this economy. He fought in World War I and even sat in our captivity and understood something in Russian.

The guards were different - one silent and kind, or something ... At the end of each working day, women who had children were allowed to take vegetables by the number of mouths. So I took it. Then two carrots, then two beets ...

The second is the exact opposite. Short, loud and scurrying. I did not have time to do one job, but he is already driving another! So I once could not stand it, straightened up and sent it to all our Russian addresses! He’s already speechless! And then he ran to the old colonel to complain. He comes. Loudly calls me and in broken Russian asks: why did I scold the overseer? I told him everything with tears in my eyes: that, they say, we don’t have time to finish one job, but he is already driving further! The old man nodded, grinned at his mustache and left. We never saw the nasty overseer anymore - transferred him to another job ...

Once, standing on the porch of a house, they peered into a column of prisoners of war, who were led from work to the camp and recognized in one of the lieutenants from their units! He was in a soldier's tunic, unshaven, dirty, overgrown ... They ran to the guards, lied that it was a cousin of one of them! They asked to leave for the night and ... The guard nodded in agreement!

But he did not know anything about the fate of husbands. Just on Sunday, June 22 was in a dismissal in the city.

In the morning I got into a column going to work, and they no longer saw him ...

Over time, one of her friends, who worked in a bureau in the city, entered the Minsk underground. They began to forward the collected data to the partisans. Sometimes they sent some packages. And closer to the liberation of Minsk, communication with the partisans was interrupted. According to rumors, the detachment was completely destroyed somewhere in the swamps.

The liberators were met with tears! The women cried with joy, and with them, not understanding why the mothers were crying, the children roared! Underground workers confirmed the activities of officer wives, and the fate of the camp life escaped them. Anna Alekseevna returned to her native village in 1944, where her husband also arrived soon! He was given leave to be healed after being wounded, and he decided to find out the fate of the family at home.

Maria Ignatievna was born near Brovary, in the Kiev region. She was seventeen on June 22nd. Father, medical assistant, was immediately drafted into the army. A few months later, her older sister. She worked as a telegraph operator at the Kiev Post Office, and on top of her shoulders lay concern for seven brothers and sisters! Mother alone could not have done it. There are so many households and mouths ...

At first, the war spared the village - only after the village the anti-aircraft battery sometimes ran into the sky. Nobody understood how our units retreated - a German convoy entered the village, but without stopping they rushed to pursue the retreating units of the Red Army. Then came the rear.

From the memoirs of Maria Ignatievna:

Two German soldiers entered the house. Like the Plug and Tarapunka - one thin and long, the second is short, chubby. Well, of these there were those who shouted "uterus, testicle, milk tough!"

One of them counted us (children) and gestured to his mother: are all her children? She nodded in the affirmative. He took a photograph from his pocket. He showed his three and again with gestures explained that it’s possible to go crazy with three, but here eight is less and less! They didn’t take anything. So left.

Then a man came into the house. Mary knew him. This man was from the Komsomol district committee. She was also a member of the Komsomol. A man called her from home to the street and talked for a long time. Their house was one of the extreme to the forest, and the girl knew all the paths there. We agreed that he would carry reports to the forest.

But this did not last long. Apparently, someone recognized an employee of the district committee. His man said that an arrest was being prepared. The Komsomol worker and Maria gathered and, confusing the tracks, drove in a cart to a neighboring village. That's just near the bridge across the Dnieper ran into a post ...

From the memoirs of Maria Ignatievna:

Worse than the Nazis were ours - those who went to the policemen. So at the post on this we presented the documents, and they did not arouse suspicion among the Germans, and one of the policemen peered at our faces for a long time and admitted.

“Isn't this Masha from the Cellars?” Komsomol member at the collective farm cash desk?

The Raikomovsky worker did not wait for the denouement and, snatching a gun, began to shoot at the patrol.

I rushed to the high bank, but an automatic burst sounded from behind. It was whipped on the legs with molten fire. She lost consciousness from pain and rolled off a cliff to the river.

She was considered dead. Nearby, the body of the district committee worker was also dropped ...

At night, partisans sailed on boats to pick up the bodies and were surprised to see that Mary was alive.

At first, a partisan doctor took care of her for a long time, then, after the liberation of Kiev, they sent her to the orthopedic hospital that opened in the capital of the Ukrainian SSR. There in 1945 she met with her future husband - a very young sergeant of armored forces with a stiff leg.

The guys got married to Maria. But she refused. I didn’t want to connect fate with a healthy one, so that I wouldn’t reproach then, they say, I took you crippled.

In 1946, father returned from the army. He treated the last wounded soldiers in Germany.

From the memory of Maria Ignatievna:

One morning, my father calls me into the yard. I go out onto the porch, and there the cart is pulled, the driver and he is Vasya ...

- Ignat Andreevich! I won’t leave anywhere until you give Maria away for me!

The father frowned, then noticed with a trained eye that the groom did not bend one leg, turned to me, and I only nodded. They collected my simple dowry and I went with him to the other side of the Dnieper! ..

Like these ones stories stored in my memory box. Maybe there is nothing heroic in them, such that they take your breath away and want to make a film. And you try on yourself - will everyone decide to be in the occupation with two children? Or, risking the lives of your family and friends, carry reports to the forest? That's it.

Ctrl Enter
Noticed oshЫbku Highlight text and press. Ctrl + Enter
We are
Thank you for being born!The blood would not freeze longer
Military Reviewin Yandex News
Military Reviewin Google News
10 comments
Information
Dear reader, to leave comments on the publication, you must to register.