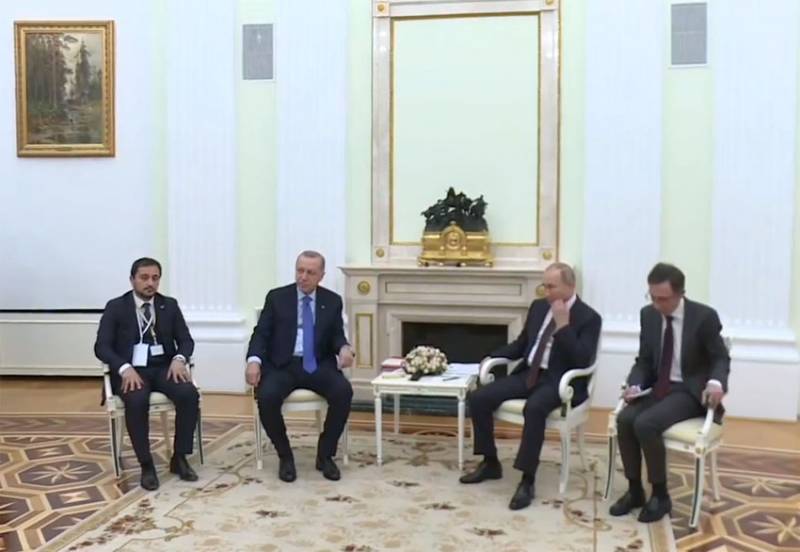 Today in Moscow, negotiations are being held between the presidents of Russia and Turkey. Vladimir Putin and Recep Tayyip Erdogan are trying to find a solution acceptable to both sides in order to prevent a direct military conflict between Moscow and Ankara.


Everyone can watch the video broadcast of the meeting on the Internet. Turkish viewers very hotly comment on the negotiations, but their comments for the most part are very distantly related to the course of the conversation.

The reaction of Turkish social networks is somewhat reminiscent of the behavior of fans at a football match, who do not discuss the course of the game, but shout slogans and other “chants”, cheering the players of their team. It also reminds a situation when a boxer enters the ring, and the fans shout: “We are with you! You are the best! Ask him! "

Here are some comments from Turkish users:

I am ready to accept the battle next to my leader, I will die for my Motherland.
Leader, may Allah help you, we will not make concessions.
Don’t be sad, my president, stand straight, do not bend. Your people are with you.

And one of the users called on the Russian president to peace:

Putin, come to your senses, because the neighbors should not be enemies. Do not be stubborn. Accept what our leader said so that the children do not die.
In the Turkish media, meanwhile, there is cautious optimism about the Moscow talks. The Turkish media generally agree that talking to each other is better than conjecturing one another. However, the resources of opposition Turkish politicians react extremely negatively to Erdogan’s visit to Moscow itself. It is noted that this is a "gesture of a weak politician."
Ctrl Enter

We are in Yandex Zen
The big press conference of Vladimir Putin
December 2010 years. Russian March. Senseless and merciless? Notes not a Russian person
180 comments
Information
Dear reader, to leave comments on the publication, you must to register.