"The concept of Putin." Debriefing of conceptual flights of the government 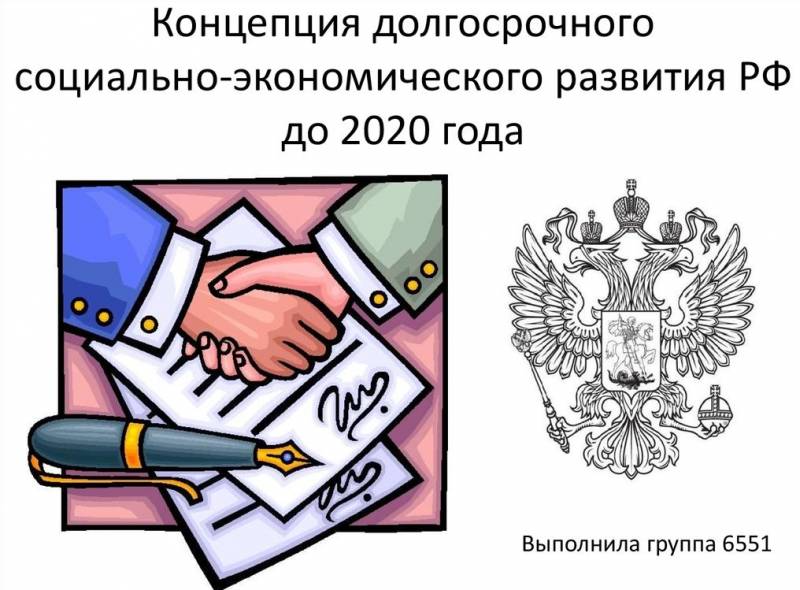 How many people today will remember how, at the finish of 2008, the Russian government, which Vladimir Putin headed shortly before, spawned something like a program document, designed for many years to come? Unofficially called Strategy 2020, the concept paper was quite officially named the Concept of Long-Term Social and Economic Development.

Promise not to marry

A concept is not a constitution or even a five-year plan. And not the budget that needs to be implemented. The concept can only be implemented, completely or not at all - it is not even able to verify the Accounting Chamber. 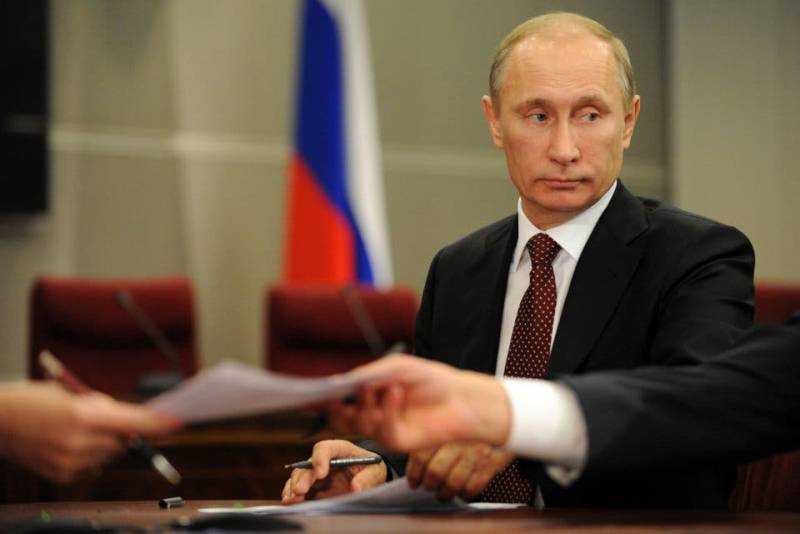 The document was developed by the updated composition of the Cabinet of Ministers and was issued as an order under number 1662 of November 17, 2008, signed by the then Prime Minister of the Russian Federation Vladimir Putin. The current head of the Accounts Chamber of the Russian Federation, Alexei Kudrin, at that time the Minister of Finance and Deputy Prime Minister, recently mentioned this document precisely as "Putin's Concept."

Unlike the federal budget, and even more so from documents from party congresses, it doesn’t matter, the Communists, United Russia or the Zhirinovites, the 2020 Concept, strangely enough, turned out to be not so capacious. Just in moderation - 197 typewritten pages with solid spaces between sections, with several attachments and tables. It’s good even without schedules: the general public might not understand this.

The concept, one cannot but admit, was well publicized, especially since the time was not easy, the global financial crisis flared up, and it was necessary to somehow cheer up the interested audience. However, interest in the 2020 Concept has faded quite quickly, and the media activity graph by the number of its references accurately repeats the notorious Gaussian distribution curve. The initial surge quickly gave way to a slide to zero. 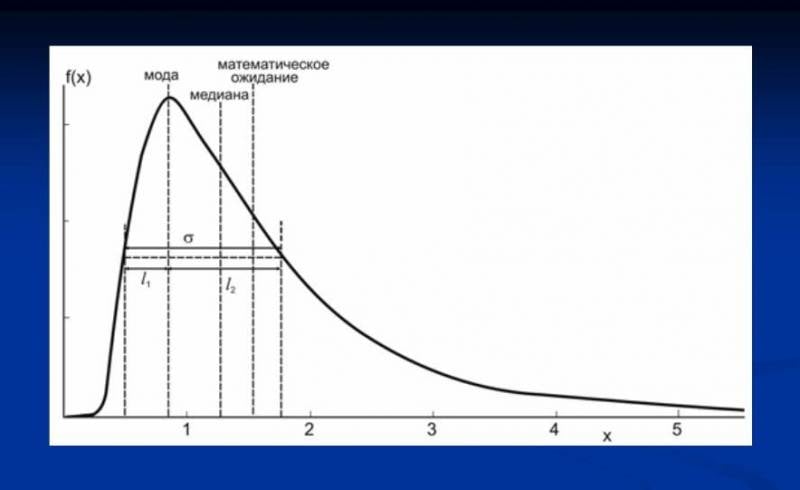 And this is understandable, ordinary people have immediate worries - not a dozen years in advance, all the more so since the Concept did not imply any support for the impoverished population in rubles, not like in dollars or euros. The oligarchs were literally at the same time supported by the ruble and dollars, moreover, under a very convincing slogan about the need to save structure-forming enterprises. And no one subsequently invested state funds back from the oligarchs and did not demand.

Especially opposition-minded media people, most of whom today have turned into popular bloggers or leading network channels, then were not slow to sneak, comparing the Concept with the notorious promise of Nikita Khrushchev. Shortly before his retirement, he directly promised the Soviet people that what the people built was communism. 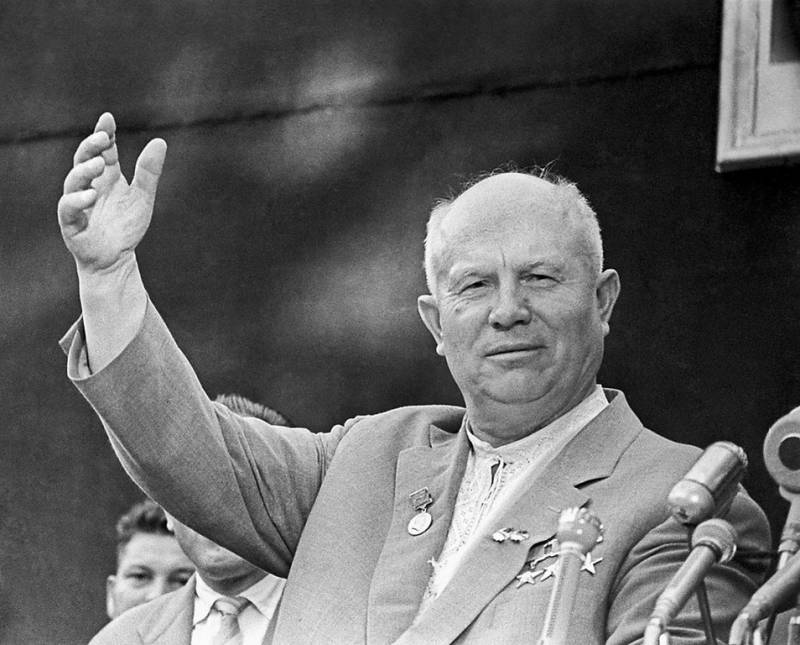 It is now quite difficult, even with documents in hand, to put into the mouth of the first secretary of the CPSU Central Committee the promise of communism either to the next generation of Soviet people, or specifically to 1980. By the way, communism in the separately chosen city of Moscow that year really came - though, only for two Olympic weeks.

In the 2020st century, Concept 6,3, sorry for the reiteration, reasonably ambitious, also promised us a lot. Starting with a real, not a declarative doubling of GDP, which is obtained from a simple conversion of the percent growth of the economy laid down in this document. And it doesn’t matter that today the minimum annual growth rate of XNUMX percent is even beyond the reach of avant-garde China, much less that of developing (still) Russia.

It is important to wave, promise. And after all, something of the promised may even come true. Even if not due to their own efforts and effective management, but due to the fact that others are doing worse. Russia can really break into the top five largest economies in the world, but not because its economy has suddenly become so advanced, but because it turns out to be in the advanced Germany with the economy, everything is “not ah, but completely seam”.

And in general, was it worthwhile, speaking with such a superplan as Concept 2020, to take an example from Khoja Nasreddin? He, as you remember, had no doubt that by the time of fulfilling his promise to the Bukhara emir to teach him how to speak, one of the three would surely die - either he, or donkey, or emir. The concept is a binding document, and too many who still remember it are still alive. And he has the right to ask what it was possible to implement from the Concept and what not.

The document is not secret or unlimited

The authors at the beginning of 2009 got acquainted with the Concept 2020 even too tightly. Our media, print and electronic, which was supervised by the Accounts Chamber of the Russian Federation, was given the task of presenting the Concept “in the best possible way”, scrupulously outlining the “great goals and objectives” by points. This was done, and with an unbiased analysis, you can get acquainted today on the pages of the journal Financial Control, which has gone into oblivion. 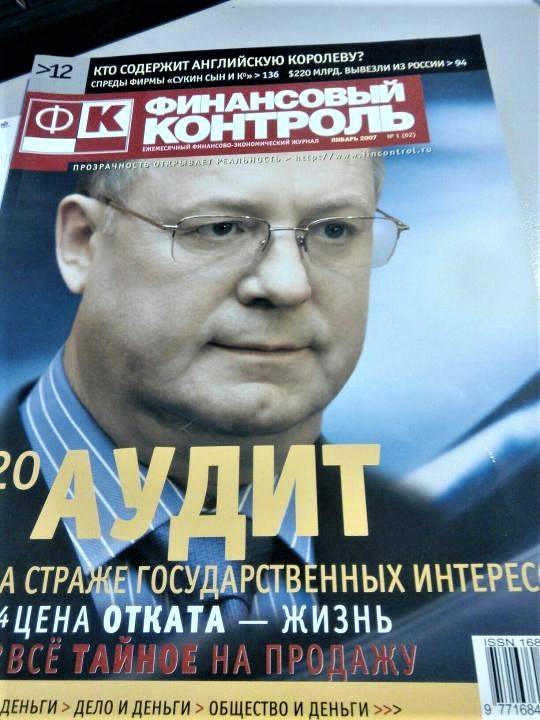 Already at that stage, many of the provisions of the Concept seemed simply unfeasible, although epithets in the worst case, such as “an overly optimistic forecast or estimate,” went to press. It is characteristic that the most doubts were caused by those points and sections in which people were discussed, about the social sphere.

Now we can state that it was precisely in this part that the Concept, alas, could not be implemented even at a modest 30-40 percent. However, we will still dwell on the social program from the Concept in the following sections of our analysis, which we admit is very, very superficial.

Starting the analysis of the epic document of twelve years ago on points, we have no right not to make an amendment for a number of objective circumstances. They themselves could create such conditions under which the full implementation of the Concept 2020 would be simply impossible. We will not list them all, we only note the crises and sanctions, the growing terrorist threat, the numerous and protracted exacerbations at the borders of Russia, the unprecedented migration and environmental difficulties.

Nevertheless, we acknowledge that several cabinet ministers that have exercised executive power in the country since the adoption of the Concept have done quite a lot of what was necessary to bring Concept 2020 to life. Of course, they did not do everything possible, but still ... Then there will be a lot of quotes, may the most impatient readers forgive us for them.

Our response to global challenges

The authors, or, if you want, the developers of the Concept 2020, started according to the Russian tradition - for health, noting the positive trends in the economy, finance and social sphere. We admit that the authors are right at that moment, that is, "in recent years, Russia has restored the status of a powerful economic power."

But at the same time, they, perhaps unintentionally, but most likely, deliberately forgot that all this was based on anti-crisis cleaning in the economy and mutual settlements, which were carried out after the 1998 default by Prime Minister Yevgeny Primakov and his deputy Yuri Maslyukov. 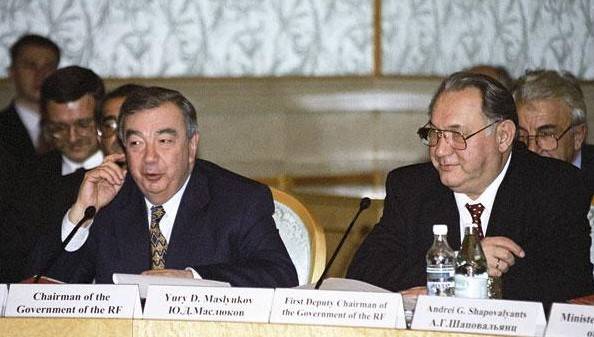 Heroes of anti-default: Prime Minister Primakov and his deputy Maslyukov
The successful oil situation of those years, which were not just called “fat zero” by the people, was not marked at all. Honestly, it was impossible for the authors to forget that all the finances and foreign trade turnover, including currency control, for a long time, until 2002, were driven by the unsinkable head of the Central Bank Viktor Gerashchenko. 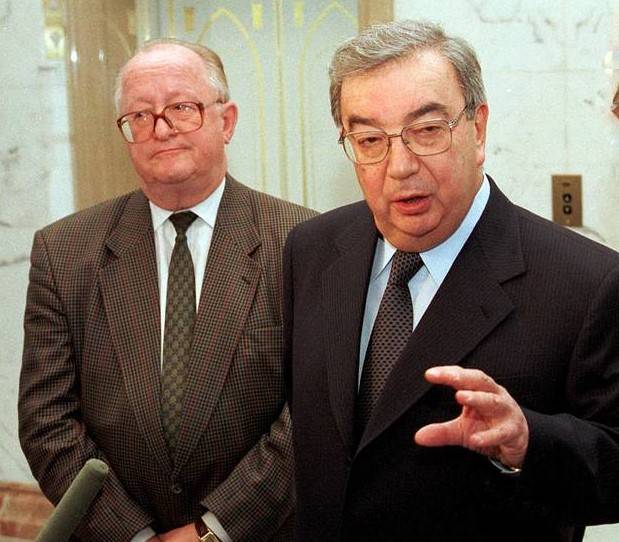 Victor Gerashchenko was always with Evgeni Primakov
By the way, it is this fact that seems to have prompted those who made the annexes to the Concept to make truly enviable forecasts for oil prices in the initial conditions. So, in 2020, as well as in the four previous ones, according to the concept, they were supposed to be no less than 108 dollars per barrel. We will not spread here that, in fact, oil quotes were selected to this mark more than once, but what is now worth keeping them at least in the region of $ 50!

But even this is not so important, how important it would be to understand why, then, for many years, completely different basic oil tariffs were laid down in the country's budget? Between $ 40 and $ 60 for the same barrel. Today, because of the coronavirus, prices for black gold have fallen precisely to such levels, and as a result of this, gas prices have fallen, but after defeating the epidemic they will certainly rise again and grow strongly.

Are we going to continue to stubbornly lay straws, forming our dimensionless oil and gas stash? But she, our nest egg, through investments in dollar and Euro instruments and directly in foreign currency, by three quarters actually goes to support Russia's geopolitical and economic rivals. 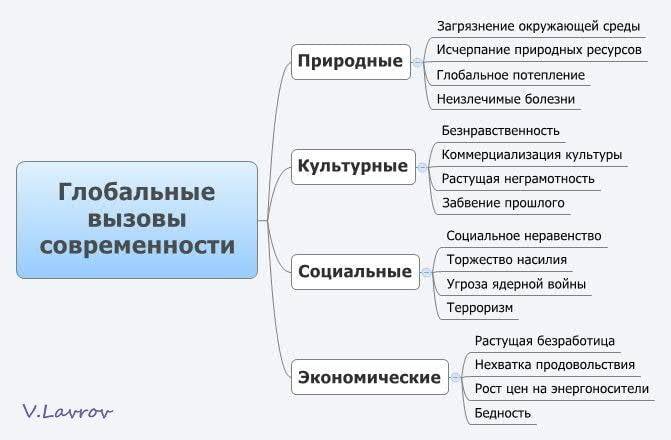 In Russia, they look at the main challenges of the XNUMXst century in a slightly different way.
At the same time, one cannot but give credit to the authors; they were able to foresee the main trends and challenges of world development. Another question is how Russia answered them, and how it was necessary to answer them. And yet we read in the Concept 2020:

The first challenge is increasing global competition ...
The second challenge is the expected new wave of technological change ...
The third challenge is the increasing role of human capital as the main factor in economic development ...
The fourth challenge is the exhaustion of the potential of the export-raw model of economic development. ”
How successfully Russia has managed to answer these challenges can be judged by its current situation. Most likely, it can be recognized that it’s somewhere around 50 to 50, and although the prospect of breaking into the top five countries with the most powerful economies is impressive, it’s generally neither cold nor hot for ordinary people.

Moreover, for most of the points that, as early as 2008, the developers of the Concept reasonably considered negative, it is impossible to note any special shifts in the direction of positive. So, even then

“... new internal growth restrictions have been identified, due to insufficient development of the transport and energy infrastructure and a shortage of qualified engineering and working personnel.”
The Concept recognized that this "could lead to a sharp slowdown in economic growth."

Rereading the Concept, with considerable regret we are convinced that the problems that it actually aimed to solve remain unresolved:

- a high level of social inequality and regional differentiation;
- high risks of doing business in Russia, including due to the presence of corruption, excessive administrative barriers, insufficient protection of property rights, lack of transparency in the land relations system, and low corporate culture;
- poor development of forms of self-organization and self-regulation of business and society, a low level of trust in combination with a low level of effectiveness of public administration;
- low level of competition in a number of markets, which does not create incentives for enterprises to increase labor productivity;
- insufficient level of development of the national innovation system, coordination of education, science and business.

We are in Yandex Zen
The tragedy of the American army ("The Atlantic", USA)
Kudrin against Rogozin, or New revelations of the ex-minister
142 comments
Information
Dear reader, to leave comments on the publication, you must to register.