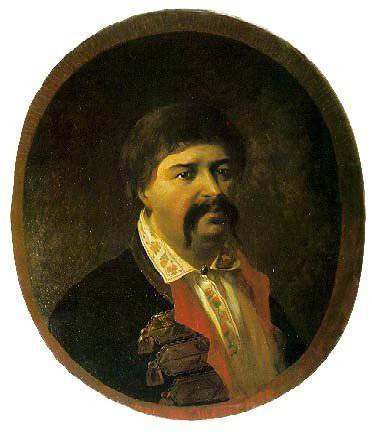 15 (26) July 1708 was charged by the clerk and the general judge of the Zaporozhsky Army Vasily Leontyevich Kochubey on charges of false denunciation of Hetman Ivan Mazepa. Thanks to hard work and knowledge of his business, he reached the highest positions: regent of the military office (from 1681), clerk-general (from 1687), general judge (from 1699), received the title of steward (in 1700). He took part in the Azov campaigns, owned large plots of land with serfs on the Left-Bank Ukraine.

The genus Kochubeev was famous for its ancient history. The founder of the family was considered a notable Crimean Tatar Kuchuk-Bey, who at the turn of 16-17 centuries settled in Little Russia among the Cossacks, was baptized under the name of Andrew. The descendants of Kuchuk Bey have long served the Russian state and its sovereigns faithfully. By their honest service they glorified their family: at first they were granted the title of count, and under the Russian emperor Nikolay I the Kochubeys were granted the princely title. So, Leonty, the son of Andrei Kuchuk-Bey, was famous for being a military comrade of Bohdan Khmelnytsky. But the grandson of Andrew, Vasily Kochubey, received the greatest notoriety in Russian history. He was born near 1640 in the village of Borshchagovka (now the Pogrebischensky district of Vinnitsa region).

Kochubey, under the influence of General Esaula Mazepa, took part in the denunciation of Hetman Ivan Samoilovich. The general officers and several colonels, led, apparently, by Mazepa, accused the hetman of bribery and the desire to form independent ownership from Little Russia. Samoilovich was sent to the link. Mazepa became a hetman. He thanked Kochubey, he received several land holdings, including the famed Nikolai Gogol Dikanka, and the post of general military judge (actually becoming the chief executive in Little Russia). A little later, the hetman begged for Kochubey the title of steward in the 17th century. the stolniki took the fifth place after the boyars, okolnichy, dumny noblemen and duma clerks. The personal relationship between Mazepa and Kochubey was also strengthened. Ivan Mazepa became the godfather for the daughter of Vasily Kochubey. The trust in Kochubey was so great that Mazepa entrusted to him the most intimate thoughts, he announced his desire to secede from Russia.

Apparently, it was Kochubey's daughter Matryona (Motrya) who became the reason for the future breakup of friendly relations. A beautiful and educated girl interested in many suitors. Even Prince Alexander Menshikov offered to marry her to one of his wealthy relatives, but the brightest was denied this. And then there was a surprise, the aged hetman Ivan Mazepa sent the matchmakers to the house of his old comrade, but he also received a resolute refusal from the parents. The marriage between the godfather and the goddaughter was considered impossible.

According to one version, Mazepa seduced a girl. According to another opinion, 16-year-old girl herself fell in love with a rich and noble man. She first spoke about her feelings, and they decided to unite their destinies. Herman sent the matchmakers several times, but his parents stood their ground. Matryona even fled to Mazepa, but he persuaded her to return to her parents, promising to get permission to marry with her. He constantly sent her gifts and letters. In 1707, Matryona married the widowed regimental judge Chuykevich, whom the hetman brought close to him.

Vasily Kochubey, decided to bring to Moscow about the collusion of Mazepa with the Polish and Swedish kings. As a hetman of the Ukraine, Mazepa became one of the richest people in Russia: there were about 100 thousand serfs under his rule. However, this was not enough for him, he wanted to create from the Ukraine a “independent ownership” under the rule of the Polish crown. The betrayal of the former benefactor was already an ordinary matter for Mazepa: he changed Poland, going over to the side of her sworn enemy Doroshenko; then he left Hetman Doroshenko as soon as he saw that his power was wavering; he betrayed and set up Samoilovic, who warmed him and raised him to the height of the officers' rank. He decided to betray his greatest benefactor, before whom he had recently flattered and humiliated. In 1706, the Swedes defeated the Saxons and forced the ally Peter, the Saxon Elector and the Polish king Augustus II, to abandon the Polish throne in favor of Stanislav Leschinsky, a supporter of Karl XII, and break the alliance with Russia. Moscow was left without allies. Mazepa considered that Peter would be defeated, unable to resist the victorious Swedish army, and began to look for a good place for himself in the future political scenario. Apparently, the thought of "independent ownership" arose earlier, but there was no convenient opportunity to make them a reality. Initially, Mazepa entered into negotiations with the widow Princess Dolskaya (for the first husband of Vishnevetskaya), and then through the Jesuits with the king Stanislav Leschinsky.

In September, 1707 in Moscow received a denunciation by the side of the general judge Vasily Kochubey. He was sent by the Sevsk monk Nicanor. However, this news was considered false. Peter believed that his faithful servant wanted to defame (denunciations happened before), moreover, it was known about personal hostility between Kochubey and Mazepa. In January, 1708 Kochubey sent Peter Yantsenka (Yakovlev) with a verbal report on the hetman’s treason. However, Peter considered this denunciation to be false, having entrusted the investigation to Mazepa's comrades: G. Golovkin and P. Shafirov. Mazepa was informed about this denunciation, and he took precautions.

Kochubey sent a third denunciation. This time he acted together with Colonel Ivan Iskra (he suspected his wife of treason with Mazepa), and the priest Svyatoylaya. The news of the hetman’s treason was given to the Akhtyr colonel Osipov so that he would hand it over to Kiev governor D. Golitsyn. The king was sure of Mazepa’s loyalty, and the grandees, who received generous gifts from the hetman, did not find grounds for accusations of treason. Yes, and Mazepa acted cautiously, did not give reason to doubt his loyalty.

Kochubey and Iskra were arrested and taken to Vitebsk, where they were met by Golovkin and Shafirov, appointed for the investigation. Under torture, the arrested "confessed" that their denunciations are false. Basil Kochubey and Ivan Iskra sentenced to death. 15 (26) July 1708 Kochubey and Iskra were beheaded under the White Church, where the camp of Hetman Mazepa stood. Their bodies were buried in the Kiev-Pechersk Lavra. Kochubey's wife and his sons were arrested.

Frightened by denunciations and investigation, Mazepa accelerated negotiations with Stanislav Leschinsky and Karl XII. Secret negotiations culminated in a union agreement. Mazepa pledged to provide the Swedish army with fortified points in Seversk land for wintering, provisions and fodder. In addition, he promised to lure the Zaporozhian and Don Cossacks and the Kalmyk Khan to the side of the opponents of Moscow.

In the fall of 1708, Peter ordered Mazepa to join the Russian army at Starodub with Cossack regiments. But the hetman hesitated, dissuaded disease and distemper in Little Russia, caused by the movement of the Swedish army. In late October, Mazepa openly went over to the side of the Swedes, escaping with the treasury to the camp of Karl, who stood in Gorki, southeast of Novgorod-Seversky. However, the Cossacks did not support Mazepa.

Tsar Peter I, realizing his mistake, summoned Vasily Kochubey's widow, Lyubov Fyodorovna. She was generously bestowed and returned to the family all the confiscated property. The Tsar declared Vasily Leontievich Kochubey “a husband of honest, glorious memory” and ordered to add two golden crosses with the motto “I rise when I died” to his family coat of arms.