The ghost of a black sky roaming Siberia 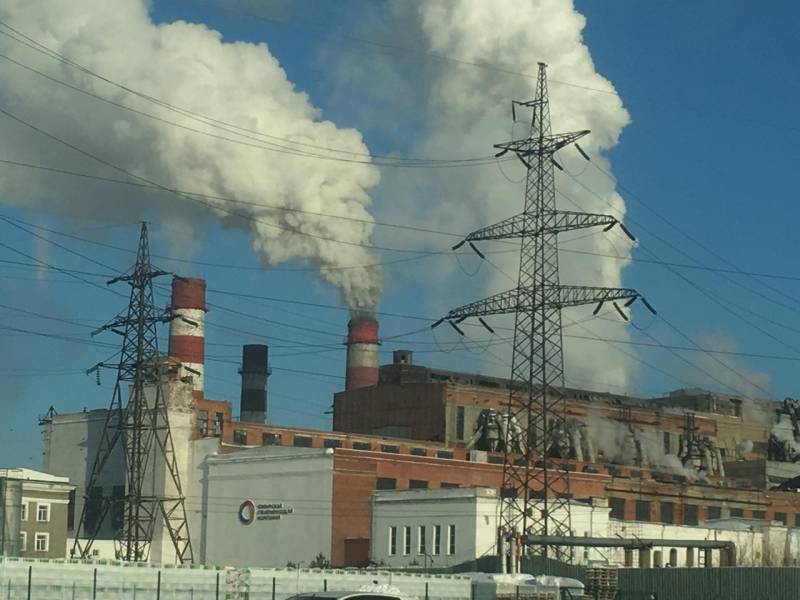 Russian legislation and law enforcement agencies are very loyal to air poisoners, especially in the Trans-Urals. In the Russian Constitution, the right of citizens to a favorable environment is formulated as abstract and vague as possible. The responsibilities of local governments do not include environmental issues at all. Corresponding environmental amendments to the country's Basic Law would clearly benefit residents of many Siberian and Far Eastern cities, suffocating from harmful emissions. Siberian cities are heated mainly by coal, which is burned in environmentally unsafe boiler houses and thermal power plants. But in the European part of the country most of the CHP plants are gasified.


Local authorities do not try to get environmental monitors to comply with environmental standards until the situation becomes catastrophic, as in Krasnoyarsk, where the air has become the dirtiest in the world. The dependence of cities on a large, often monopolistic energy supplier binds regional officials and deputies in matters of ensuring the safety and reliability of heat supply. Novosibirsk has become a symbol of the impending collapse of heating networks with annual thousands of emergency outages every winter. Hot spots are called Chita and Khabarovsk.

Social networks are full of indignant user reviews who actively criticize the current situation. The Siberian generating company, which controls a quarter of Siberian energy, seems to have become aware of the risks to its business due to growing public protests. She is trying to establish, through scientists and experts, a dialogue with the authorities and the population. But it turns out so far so badly. The Novosibirsk regional authorities are either too lazy or incompetent to understand the growing energy problems of cities. This was shown by the next round table “Energy Efficiency and Energy Saving in Heat Supply”, recently held at the Institute of Economics of the Siberian Branch of the Russian Academy of Sciences in the Novosibirsk Academgorodok. Of the two dozen invited deputies and officials, not one came!

Here is the black sky above us

The Krasnoyarsk authorities for many years, apparently, hoped that the constant poisonous smog could fly over the city somehow by itself. But in the end, they received massive protests and an acute political crisis demanding the resignation of the governor. 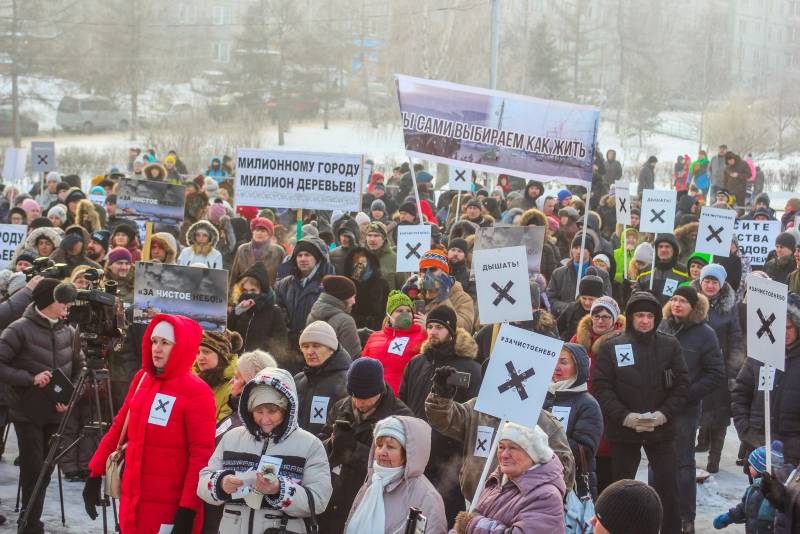 The absurd excuses of the Krasnoyarsk governor of Uss: they say that the black sky above the city is historical the legacy of unreasonable ancestors, and a sluggish imitation of environmental activity only added fuel to the fire. The head of Rosprirodnadzor Svetlana Radionova recently went in a hurry to extinguish the mass discontent of the townspeople.

It was only upon her arrival in Krasnoyarsk that a substantive conversation began on solving environmental problems: the residents were firmly promised the metro, the mass elimination of coal-fired boilers and the introduction of new treatment equipment in the most dirty local industries.

Even the foreign media began to write about the disgusting atmosphere in Krasnoyarsk, Chita, Kemerovo, Novokuznetsk. Novosibirsk "became famous" for the whole world with the poisonous ash dump of the CHPP-5, which the local wits immediately called the "Siberian Maldives."

In Novosibirsk, local authorities do not feel a threat either from the environment or from emergency heat supply, although all the symptoms of the growing crisis are obvious: the city has a stable high level of atmospheric pollution and massive heat cuts due to torn heating systems. The local Ministry of Ecology, apparently, sees the main environmental problem of Novosibirsk in natural dumps and spends all its energy on the Clean Cities project to eliminate them.

The Siberian Generating Company (SGK) tried to solve the problem of repairing worn-out heating systems due to the accelerated increase in heat tariffs. Having met with resistance from residents and the governor, SGK is now trying to establish a dialogue with the authorities and scientists to determine the prospects for its presence in Novosibirsk. But the authorities are surprisingly indifferent to the desire of the SGK to receive from them any directions and guidelines for the future.

How Novosibirsk authorities hide their heads in the snow

The main headache of this winter for the townspeople was not constant blackouts (already suffered), but uncleaned streets. The city was buried in snowdrifts and, it seems, all the energy of Mayor Anatoly Lokty this spring was aimed at saving the streets from the flood.

Energy security issues were not particularly worrying for local deputies before, but now they have completely moved to thirty-third place. Europe is not a decree for us and not an example since the same-sex marriage was legalized there.

It’s a business in the European Union that the authorities are setting stricter environmental standards and introducing ever new restrictions on the hydrocarbon business. True, it does this in advance and gives entrepreneurs time to rebuild production under new business standards in the interests of the population and gives time for their implementation. So, for example, at first the requirements for the quality of motor fuel were constantly tightened, and now there are deadlines for introducing a ban on the implementation of new cars with internal combustion engines. In Norway, they will be banned from selling after five years, in England and France since 2035. In Germany, by this time, all coal-fired power plants will stop operating.

And in Novosibirsk, as in many Russian cities, local authorities did not even think about the environmental requirements for energy. The federal project “Clean Air 2019-2024” seems to them to be the heart-rending dreams of wealthy Moscow.

The amount of air emissions is directly related to the implementation of energy conservation. If less heat is required, then less coal or gas will be burned, there will be less emissions. Although Europe saves heat, we have nowhere to put coal, apparently, the Novosibirsk authorities say. The region with high scientific potential takes 48th place in Russia in terms of costs for improving the energy efficiency of housing and production and is included in the group of those lagging behind. In Novosibirsk, energy is spent on heating at least 35-45 percent more than necessary.

Representatives of SGK directly stated at the round table that their company is not interested inso that consumers save energy and pay less for it. The capacity of the thermal power station is already only two-thirds full, and the heat left after the generation of electricity has nowhere to go, especially this warm winter in Siberia. Excesses must be emitted into the atmosphere through cooling towers. But according to the law of the market, SGK will not be able to sell more heat than consumers buy, and in principle it is ready to adapt to lower consumption if they start saving it in Novosibirsk.

Scientists and experts at the round table suggested preparing an appeal to the authorities in order to draw her attention (once again) to the most acute energy problems of Novosibirsk. Try to interrupt the sleep of reason of officials and deputies at least on the eve of the most exciting event in their quiet life - re-election of the legislative assembly of the region and the city council.

Here are the key suggestions from experts.

It is necessary to put in place weather control systems for heat consumption in all apartment buildings, schools and kindergartens. It maintains a comfortable room temperature, automatically increasing or decreasing the flow of energy entering the house, depending on the weather. Only these devices will reduce the amount in payments for heat from 15 to 35 percent. But at whose expense these regulators will be installed, the authorities should decide together with the townspeople.

It's time to stop hiding your head in a snowdrift in anticipation of the collapse of heating networks. We must offer a real way to restore them. According to the well-known Russian expert on heat supply, candidate of economic sciences Yuri Voronov, for this it is necessary to spend ten (!) Times more money on annual heating repair than now.

The population does not have that kind of money, and SGK will not want to invest so much. Novosibirsk and residents of other cities have become hostages of the de-industrialization of the country. In Soviet times, most of the costs of maintaining heating networks were borne by enterprises, most of which are no longer available. Who will take the burden on them? There is no answer to this yet.

Novosibirsk, like many large cities, still does not have a strategy for managing heating networks and energy sources as a single energy complex. In Novosibirsk, for example, there are 4 combined heat and power plants and several gas boiler houses operated by SGK. And almost two hundred local boiler houses owned by other owners. SGK perceives them as competitors and seeks to squeeze them out of the market in various ways. Only the local government can become an arbiter who decides which station to live and who will have to close. So far, this process has been left to SGK, which in various ways removes competitors from the market, including environmentally friendly gas boiler houses.

It is necessary to open all the data on the atmospheric emissions of all TPPs and boiler houses. In Krasnoyarsk, this became one of the main demands at a recent protest rally. Then it will become clear how the cleaning systems meet modern requirements and which of them need to be replaced.

The deadlines for closing ash dumps of thermal power plants and the restoration of their territories should be determined. Only in Russia ash dumps are still allowed.

Scientists and experts hope that sooner or later, officials and deputies will hear them. In the nineteenth century, no one believed Marx when he predicted that the ghost of communism was already roaming Europe. So the authorities of the Siberian regions do not want to admit the obvious: the Krasnoyarsk ghost of the black sky is already following them.

We are in Yandex Zen
Gazprom gives Siberians coal miner
CHP - on brown coal! How in Siberia ignore the policy of the President of the Russian Federation
108 comments
Information
Dear reader, to leave comments on the publication, you must to register.