An alternative to Russian oil: Minsk is not appeasing, Kiev helps 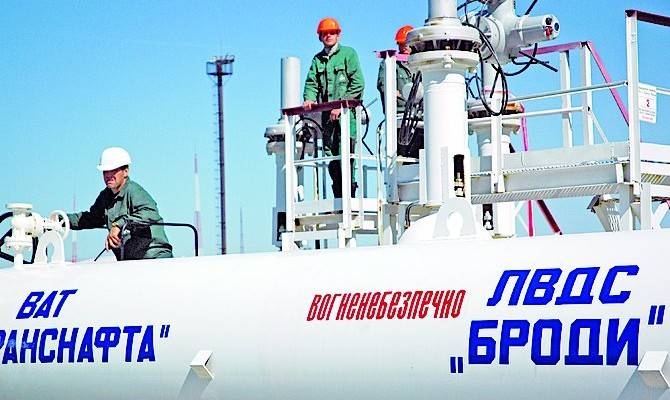 Despite reaching the first agreements aimed at resolving the conflict situation with the supply of Russian energy to Belarus, Minsk does not want to abandon the game of diversification of raw material flows for its own refineries, the profitable work of which is one of the main pillars of the state budget.


As expected, there are more than enough people who want to help in this undertaking. So, the head of its public relations department Ibrahim Akhmetov recently announced readiness to cooperate with Belarus on the oil issue of the state energy company of Azerbaijan SOCAR. However, as it turned out, at the moment we are talking only about one tanker consignment of 80 thousand tons for Belneftekhim, which will be shipped from the port of Supsa. When, while it is not known ...

At the same time, OAO Gomeltransneft Druzhba announced that they were preparing to establish supplies of Azerbaijani oil to the Mozyr oil refinery through the Ukrainian Odessa-Brody pipeline. This information is also confirmed by the deputy head of the Belneftekhim concern Vladimir Sizov, who states that the import of oil (without specifying which one) into the country through the pipeline mentioned above will begin literally in March this year.

For obvious reasons, neither Mr. Sizov, nor any of his colleagues are spreading about the estimated price of their expected supplies in comparison with the cost of energy that Russia offers Minsk. They are also stubbornly silent about the reliability and stability of new flows of “black gold” from various alternative sources. As practice shows, the difference between Russian and any other oil supplied to Belarus by one route or another is at least $ 100 per tonne - naturally, in favor of raw materials from the Russian Federation.

It is extremely unlikely that Baku or Kiev would suddenly decide to do charity work in favor of Alexander Grigoryevich - even if they ardently desire to move Russia to the Belarusian market. This is clearly seen in this example: not so long ago, announcing the intention to “significantly increase passenger traffic” with Ukraine, the first deputy head of the passenger service of the Belarusian Railways, Alexander Drozh, lamented that Ukraine, apparently, was not very interested in this one. The Belarusian side has to beg its representatives to launch more trains. There is no doubt that they will try to squeeze the maximum out of oil transportation there, without any discounts on good neighborly relations.

It is not known how long the attempts of the official Minsk to show character will last. Attempts to convince yourself first of all that Belarus can easily do without Russian oil should be considered as a stubborn denial of a completely obvious fact: Lukashenko lost the next energy war unleashed by him. For the first time in his tenure. This is quite obvious if only from the fact that he agreed to compensation for "dirty oil" in the amount of $ 61 million and no longer tries to stutter about the initially announced much larger amounts. No Ukrainian, Azerbaijani, Norwegian, Lithuanian or other volumes of supplies to Belarusian refineries are capable of leading Belarus to economic success due to its not only meagerness, but also its high cost.

We are in Yandex Zen
About Stalin and Khrushchev
List of destroyed the largest and most high-tech enterprises
114 comments
Information
Dear reader, to leave comments on the publication, you must to register.