How the younger brothers S. Bandera died in Auschwitz 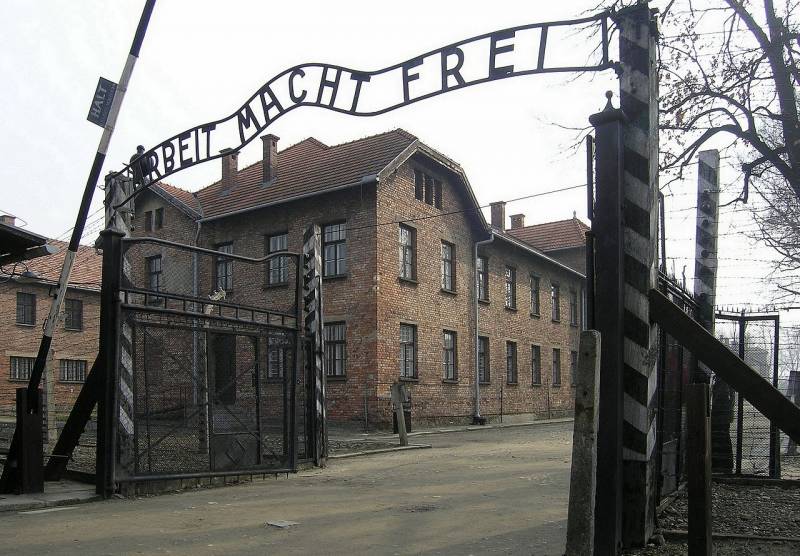 The thesis is widespread in Ukraine that the Hitlerites, who were not embarrassed in their methods, forced S. Bandera, thrown into the Sachsenhausen concentration camp, to cancel the “Act of proclamation of the Ukrainian state”, but the head of the OUN did not submit to the monsters even after the death of two of his brothers, who experienced all the horrors of the concentration camp life and the "brutally tortured" in Auschwitz. The materials at our disposal allow us to consider the circumstances of the death of the brothers in detail.


In 1916, the city of Auschwitz (former Polish Auschwitz), owned by the Austro-Hungarian Empire, built the "Saxon Camp" ("Sachsengänger"), intended for temporary residence of the Saxons - seasonal agricultural workers from rural areas of East and West Prussia, as well as Poznan, who came for a well-paid job for harvesting sugar beets. Twenty-two brick dormitories (8 two- and 14 one-story) and 90 wooden barracks were erected on the camp, intended to accommodate approximately 12000 people.

After the occupation of Poland by Germany, by April 1940, the inspection initiated by the SS (Schutzstaffeln, abbr. SS) completed the abandoned camp long ago, which recognized the latter as suitable for creating on its base a “transit and quarantine camp” for Polish opponents of the occupation regime, which were supposed deported to Germany for subsequent use as bonded laborers. However, since sand and gravel pits were located nearby, and also taking into account the convenient transport and geographical location of Auschwitz, the SS decided to develop their own “business” there. Over time, the nomenclature of the work performed by the prisoners became very extensive: from repairing Wehrmacht weapons systems, producing explosives and extracting sand and gravel from nearby quarries, to growing flowers and raising fish, poultry and cattle.

After the announcement of the “Act of the Proclamation of the Ukrainian State” in Lviv on June 30, 1941, Oleksandr Bandera arrived there, where he was arrested by the Gestapo and sent to Krakow prison. In the same year, Vasyl Bandera was arrested in Stanislav (now Ivano-Frankivsk). 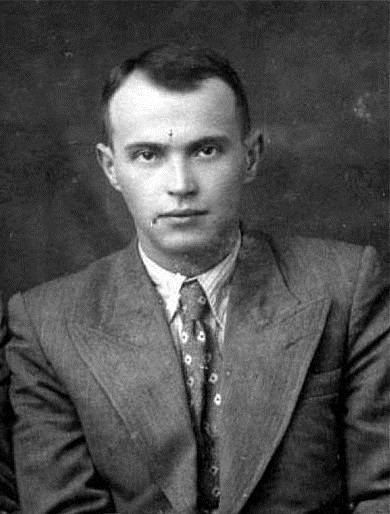 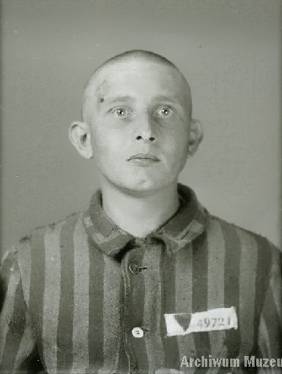 Vasyl Bandera
On July 20, 1942, the security police (Sicherheitspolizei, abbr. SiPo) sent twenty-four members of the Ounwitz concentration camp in Auschwitz I from Krakow, including Vasyl Bandera, who was assigned camp number 49721.

After quarantine in block No. 11, they were initially placed in a dormitory (hereinafter referred to as block) No. 13, but then, due to the aggravated relations between them and the rest of the prisoners, all Ukrainian nationalists were gathered in two rooms of block No. 17. Four days later, another one joined them S. Bandera’s brother, Oleksandr (camp number 51427), consisting of a group of sixty people (mostly Polish political prisoners), also transported from Krakow. Oleksandr, like his younger brother, also got a job in the construction team "Neubau". The hard work for which he was determined by the foreman (Vorarbeiter) Franciszek Podkulski (camp number 5919), led to physical exhaustion, apparently not in the good health of O. Bandera, and he was soon placed in hospital unit (Revier) No. 20, where sick OUN members on the ground floor, in ward No. 4, a separate room was allocated. Here, on August 10, 1942, during a routine examination, 75 seriously ill prisoners were selected, including O. Bandera, who were killed on the same day by order of the camp doctor with an intracardiac injection of phenol.

Vasyl Bandera, having got to Auschwitz, was confused by Polish prisoners with his older brother Stepan, by whose order June 15, 1934, OUN fighter Grigory Matseyko (underground nickname Gaunt, in 1941-42 the leadership of the OUN and German special services planned to use him to assassinate the president Roosevelt) mortally wounded Poland's Interior Minister Bronisław Peratsky (Bronisław Wilhelm Pieracki). Later, during the years of World War II, the head of the OUN S. Bandera organized ethnic cleansing and pogroms, during which hundreds of thousands of Poles and Jews, including family members of some prisoners of Auschwitz, were killed. For the first time, the elder (Kazetpolizei, abbr. Kapo) of block No. 16 Edward Radomsky pointed out to V. Bandera other Poles.

A plot was drawn up for the purpose of revenge, it is interesting that the group of prisoners-conspirators included both ethnic Poles and Jews of Polish descent. The leader in the group was Neubau foreman Franciszek Podkulski, in this he was assisted by the Neubau capo Kazimierz Kolodynski, Boleslav Jusinski, chimney sweeps Tadeusz, Edward and some others. Franciszek and Kazimierz drew up a plan for the execution of the sentence, and on August 5, 1942, Podkulski pushed V. Bandera, who worked as an auxiliary worker in the plasterers brigade, along with a wheelbarrow from the first tier of the scaffolding. Vasyl, who was injured in the fall, was sent to a camp hospital. According to the camp hospital book, on August 5, 1942 he was placed in hospital block No. 20, from where he was then transferred to hospital block No. 28, where he died on September 5 of the same year. According to the memoirs of the former orderly of the hospital unit Jerzy Tabo (camp number 27273), Vasyl died of diarrhea. Apparently, from other patients he contracted an infectious intestinal disease like dysentery, one of the symptoms of which is severe diarrhea, which leads to dehydration and death.

As political prisoners (Polizeihäftling), the OUN members in the concentration camp were under the jurisdiction of the Gestapo of Katowice, awaiting trial at Auschwitz. Some of them were later released from Auschwitz, for example, on December 18-19, 1944, in connection with the organization by the Germans of the so-called. Ukrainian National Army (Ukrainische Nationalarmee), were released Yaroslav Rak, Mykola Klimyshyn, Stepan Lenkavsky and Leo Rebet.

The Ounovites belonged to the category of privileged prisoners (Ehrenhaftlinge), which they were much proud of. They occupied a special (compared to other prisoners) position in the camp. They were not shot, they were not hanged in front of the ranks, and they were not taken hostage. They had their own, separate rooms for living in the block, there was even a separate room in the hospital. Prominent Ukrainian nationalists not only regularly received food packages from the Red Cross, but thanks to the guardianship of the political department of the camp (Politische Abteilung, actually the Gestapo camp) they occupied “prominent” positions “under the roof”, that is, in the room, which gave the prisoner great chance to survive. These were, for example, places like a clothing store for prisoners (Bekleidungskammer), a storehouse for things confiscated from newly arrived prisoners (Effektenkammer), a camp hospital (Krankenbau), a vegetable warehouse, a bakery, a slaughterhouse and kitchens (serving both prisoners and SS men). Ukrainian nationalists were accommodated in one of the two-story landscaped brick blocks (No. 17), built of red brick in the summer of 1941. The building had two residential floors, a basement and an attic. 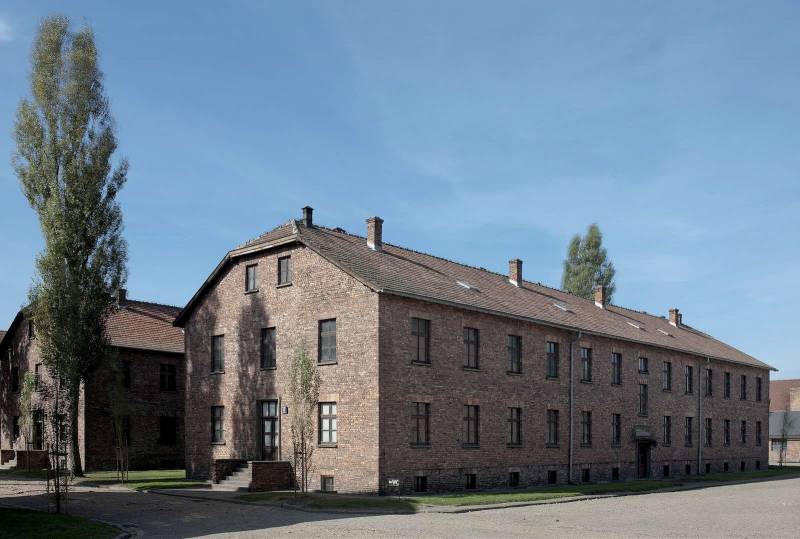 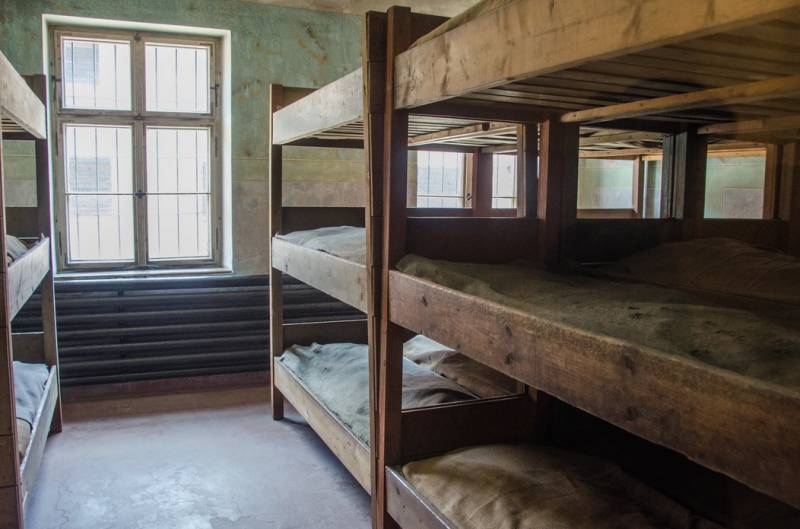 Nara in the dormitory of the block 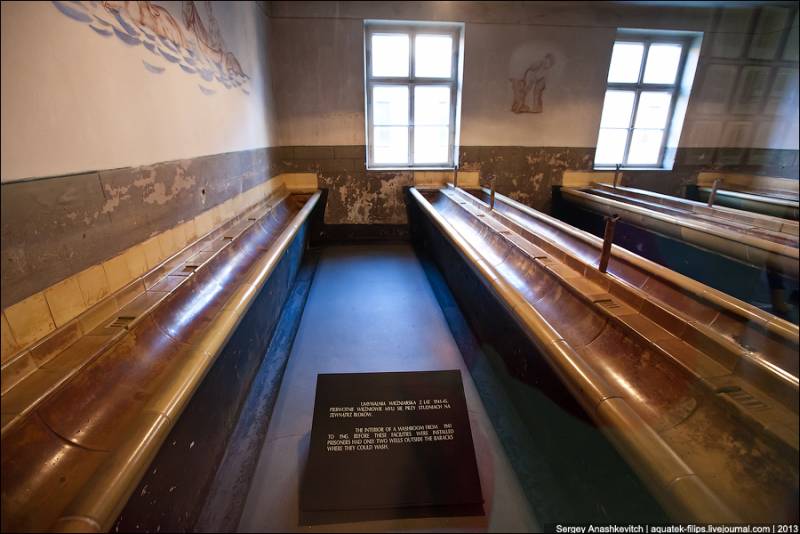 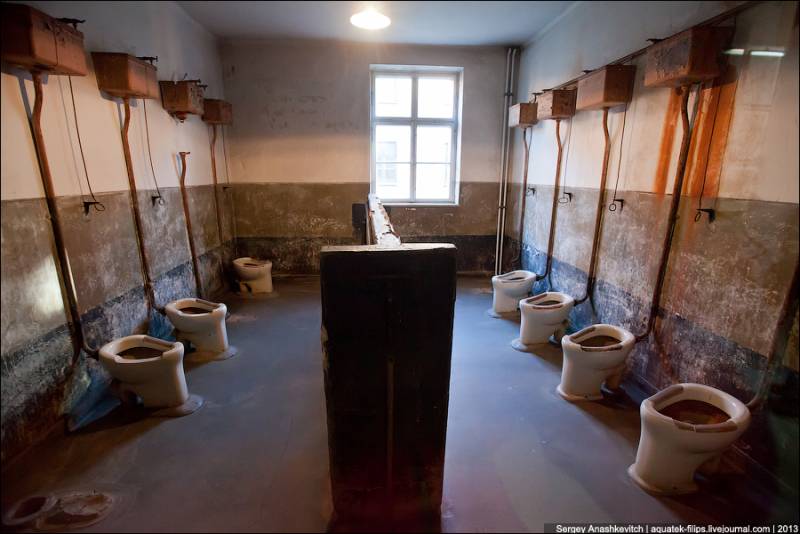 Toilet in the block
The rooms in which the prisoners were housed were corner rooms with a total area of ​​70,5 and 108 square meters with electric lighting, and, judging by the photographs, water heating, and, depending on the area, five or seven windows. In addition, each room had one or two stoves - the number of the latter depended on the area of ​​the room. Unlike such brick blocks, the most common one-story brick and wooden barracks in the concentration camp had either one furnace for the entire hut, or there was no furnace (like windows) at all. 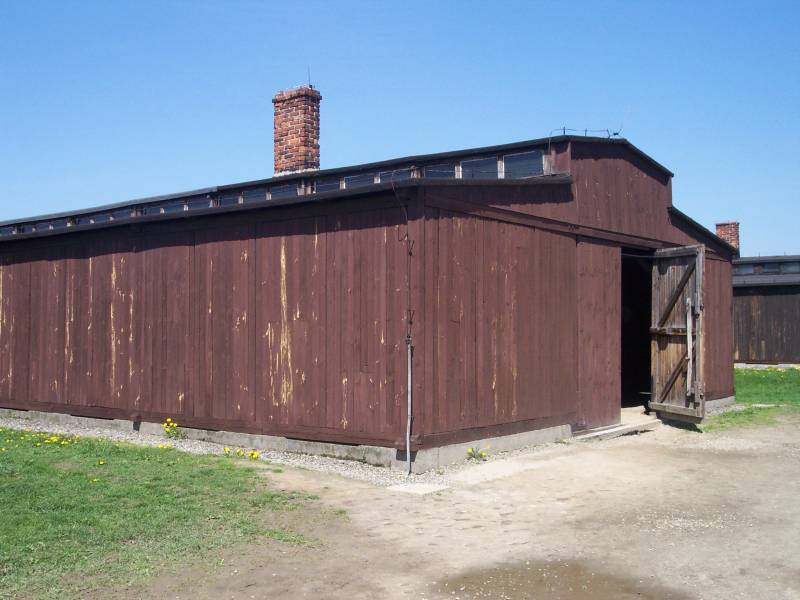 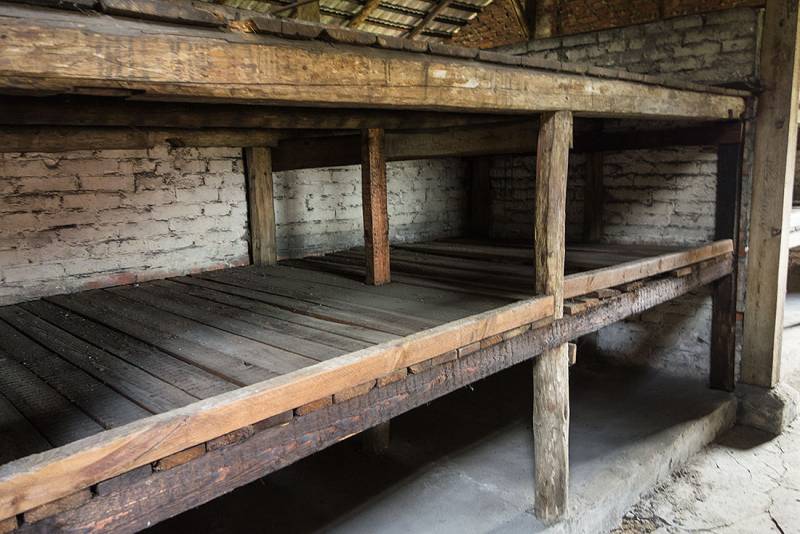 Naras in the usual Auschwitz hut 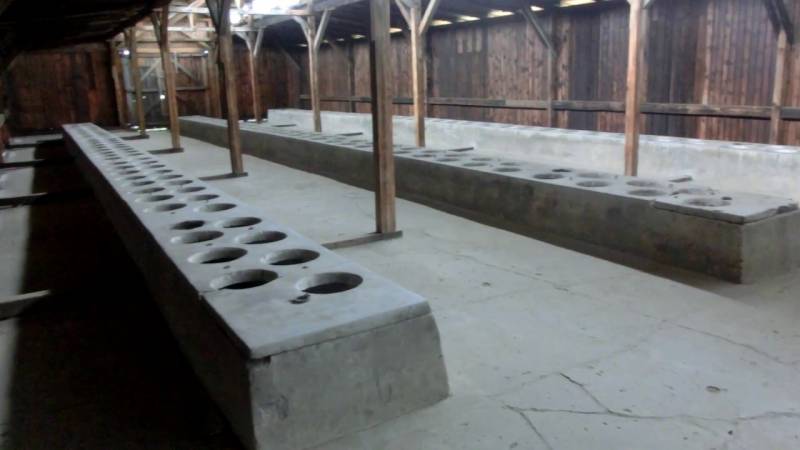 Inside the toilet
The prisoners held there were brought in by a system in a special toilet hut, where there were three long ramps, two of which, densely studded with holes, were used for basic needs, and the third as a washbasin. At the same time, two-story brick blocks were equipped with two heated toilets with toilets and urinals, as well as a separate room for washing.

A special attitude towards the members of the OUN was also shown after the death of V. Bandera, when the camp administration launched a thorough investigation in order to search for those responsible. One of the Banderaites saw how Vasily was pushed, and reported this to the political department. The direct executors of the sentence were summoned to the Gestapo camp for interrogation, and Boleslav Juzinski, both chimney sweeps and other prisoners, after several days in the punishment cell, were sent to the concentration camp Sachsenhausen (KZ Sachsenhausen). During interrogations, Podkulsky and Kolodynsky, covering their comrades, took all the blame.

As a result of the investigation carried out by the Gestapo camp regarding the death of Bandera’s brother, both of them were first put in the punishment cell of Unit 11, and subsequently, on January 25, 1943, they were shot at the “wall of executions”. In addition to them, another eleven of those who participated in the elimination of Bandera were shot there. So the camp administration of Auschwitz avenged the Poles for the death of his brother S. Bandera.

* OUN-UPA is prohibited in the Russian Federation.

We are in Yandex Zen
Bandera. Myths and Facts
The UPA was like the army of Makhno - a peasant and often very cruel: interview of the historian Jaroslav Gritsak
46 comments
Information
Dear reader, to leave comments on the publication, you must to register.