What lies behind the coronavirus 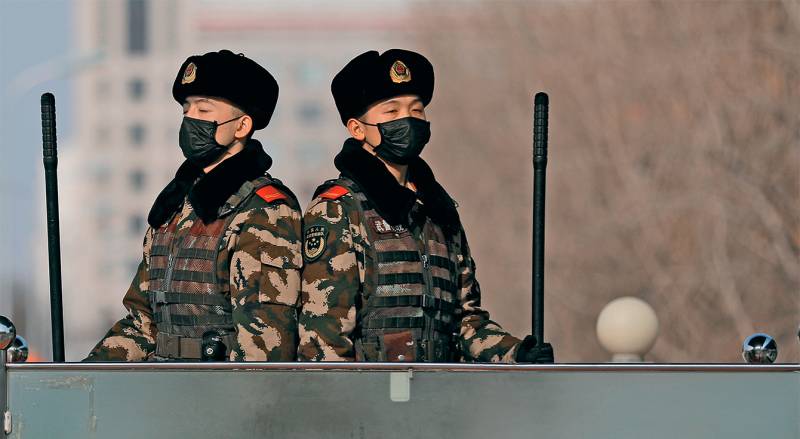 Apparently, the coronavirus is becoming a "black swan", which not only dealt a powerful blow to the "Chinese factory" and reveals all the deepest contradictions in the Middle Kingdom, but it will also turn the whole world upside down. Stock markets are falling, the global financial system may be destroyed. The petrodollar system will be a thing of the past, the world will be divided between “thrones”.

As of February 25, 2020, the number of infected exceeded 80 thousand people, 2,7 thousand people died. The mortality rate rose to 3,4%. The hopes that the virus only affects the Mongoloid race, although most of the patients are in China, South Korea and Japan, were not realized. There was an outbreak in Italy and Iran. At the same time, the situation in the Islamic Republic of Iran is unclear, it is obvious that the authorities are hiding the real number of cases and foci of the virus. Also, the disease manifested itself in several other countries. The situation is exacerbated by a relatively long incubation period, often an asymptomatic initial period of the disease. As a result, quarantine measures in the PRC were clearly late, the virus spread around the planet.

WHO has called on the world to prepare for a “potential pandemic.” IOC announced the possibility of canceling the Olympics. Coronavirus caused the fall of world exchanges. The global economy is starting to fail. The problem is with suppliers of raw materials, as the "world factory" is in a fever. Arab monarchies, Turkey, Iraq close the communication with Iran. As a result, a negative scenario arises when the virus during the first half of the year will somehow affect the entire planet. Chinese events will be repeated everywhere, the virus will affect everyone. A new political and economic reality is emerging.

China is gradually launching its production. But the first quarter will be a failure. Compared to last year, China’s GDP will drop from 1% to 4% in the first three months. By the end of the year, the gap can be overcome if there are no new surprises. But economic growth this year will be on the verge of permissible. Moreover, the economy of China is overloaded with debt. The financial system will again have to be saved by filling it with money. In addition, tough quarantine measures hit the workforce. A significant part of the Chinese workforce is internal migrants. This is a consequence of the chronic contradiction in income differences between the mainland and the coast of China. Inland provinces are relatively poor, despite the tremendous changes that have occurred over the past 20-30 years. Primorsky provinces are richer, more developed.

Now tens of millions of people are cut off from jobs. Quarantine either at home, or at the place of work, or everywhere. Plus restrictions on the operation of transport. Quarantine cancellation is not earlier than April, but negative options are also possible. That is, the Chinese "factory" can stand up for a long time. Donald Trump has already reduced demand for China, and pumping money no longer helps. The Middle Kingdom, which was already approaching stagnation, will be gripped by the economic crisis. And during the “Chinese miracle”, a powerful middle class appeared in the PRC, which does not want to tighten its belts and no longer knows a different life, as in a period of prosperity. The economic crisis will pull social and political. In the rich and multi-million cities on the coast, the Hong Kong version may repeat itself. Part of the Chinese elite, dissatisfied with Xi Jinping’s policies, can use this moment for their game. The rich coast will declare that it is not “willing to feed” the rest of China and will put the whole power under the knife in order to maintain access to the American market.

Celestial will repeat its historical cycle: chaos, internal war of “kingdoms”; overcoming chaos, creating a centralized state, “little prosperity”, a period of relative calm and contentment, stabilization; degradation, decay, unrest and chaos. Ideally, the Celestial Empire after a period of "small prosperity" should reach a "great unity", the harmony of society and nature, but so far it has never succeeded.

Thus, the coronavirus has become a “black swan” for China, which causes the threat of a transition from a period of small prosperity and stability to the time of troubles. The people are already on the platoon, and the dissatisfied part of the elite may soon organize several Hong Kongs - the Tiananmen. This is able to break up Celestial Empire into several "kingdoms" competing with each other in the political and economic plan of the provinces.

A new round of global crisis

It is clear that in the current conditions, when China has become a global “factory”, and the outbreak of the coronavirus leads to the blockade of entire countries and regions, all this becomes a detonator for a new cycle of the global crisis.

At the same time, everything is superimposed on ready-made soil: the central banks of the leading powers of the planet flooded the previous wave of the crisis with money, but this does not help; trade war of the USA and China; Britain’s exit from the EU with huge economic and political (the threat of separation of Scotland) consequences for Britain; huge problems in the financial sector of the United States and China; stagnation of the German economy (the strongest in Europe), serious problems in other EU countries; problems in the economy of Argentina, Brazil, Turkey, South Korea, Russia, etc. Plus, the already existing Middle East front of the world war, where the situation is sliding into an open confrontation between Russia and Turkey.

So a new wave of global global crisis is rolling. The world is steadily slipping into turmoil and the main shocks are yet to come. In the spring and summer of 2020, the crisis will affect all the leading powers of Asia, will hit Europe, Russia and the United States. This will cause great political consequences and changes. In particular, the funnel of chaos in the Middle East will inevitably lead to new big blood.

We are in Yandex Zen
A great interview with Sergey Lavrov: about Ukraine, Obama and Iran
What you didn't want to know about England
77 comments
Information
Dear reader, to leave comments on the publication, you must to register.