Putin's agents in the US political regiment arrived 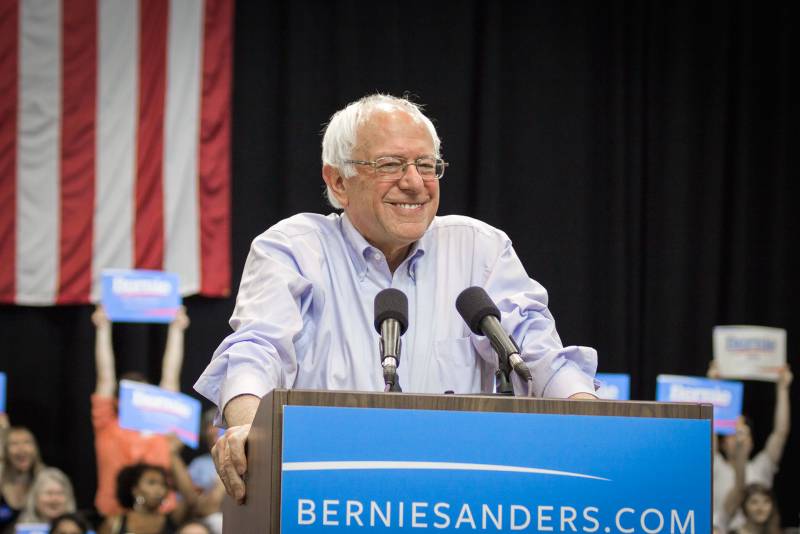 The American pre-election feud continues, the main candidates: Trump, Sanders, Biden, as well as a cheerful open homosexual Pete Buttigic. The latter is recognized by political scientists as the “fallback option” of the Democratic Party, which may well become the first, having escaped from the unknown presidency, as Barack Obama used to be, and in Europe - Emmanuel Macron.

What happens if you scrape “democracy”?

The current chances are for the current President Trump, the rest of the main candidates are all from the Democratic Party, but there is no agreement in their camp. And it is not foreseen, moreover, Sanders is already declared by the press president “Putin’s second agent,” so that the election may have a “Russian final” accusing Russia of interfering in the US elections on an unprecedented scale. All this poverty of "American democracy" says that its "deep state" is falling apart, according to which President Trump has slightly scratched.

Under President Obama, there was a kind of real democracy: the “deep state” was brainwashing Americans through CNN, and the State Department indirectly controlled Western Europe and, if possible, observing decency, modestly calling himself “the first among equals”, just “the leader of the free world” .

President Trump and his comrades dismissed this hypocrisy as being too costly. And introduces the direct colonial rule of Europe, taken individually by each country. So it’s easier for him. This is the crisis of the modern West: Trump is changing indirect "democratic" governance to "authoritarian" direct. This is all his horror and ... charm.

Suddenly, a “dark horse” appears on the primaries of the Democrats - the mayor of a small provincial town, Pete Buttigic. He is energetic, charismatic, homosexual, with Harvard behind him and the rank of lieutenant of naval intelligence; from the unknown, he jumps to second or third places in the primaries, which is no coincidence, according to several observers.

Socialist Bernie Sanders breaks into first place among democratic candidates after Biden’s “Ukrainian” failure, but it is believed that he will not be able to defeat Trump. The latter defiantly welcomes the successes of “crazy Bernie” and calls on him “not to let his victory be stolen”, as Clinton’s “stolen” victory in 2016. Recall that this scandal, the fact that it came out, is attributed to “Russian intervention”, so perhaps Sanders is a real “Putin agent”, and Trump is innocently injured ...

Therefore, the Democrats and need a new Obama or American Macron, and homosexual lieutenant Pete, it seems, and are preparing for this role. Today in America, after the scandalous attempt to impeach Trump, everything is possible, although the promotion of the “new Obama” will be a clear repeat, which could turn into a new failure for the democrat. And what else remains for them?


Still, we live in Europe. Its western part still looks good, externally, but England is already sailing to America, the process will continue. The roller coaster is global.

The Chinese coronavirus can deeply intervene in European affairs, and Russia should be expected to be blamed for the consequences. This can be justified easily, at least by the common Russian-Chinese border. Europe cannot recognize the weakness of its sanitary-epidemiological services ...

Russia is still pursuing a compromise-pro-European policy, despite the intervention of Europe in the coup in Ukraine in 2014. This is due to serious economic ties with Europe and the mood of our elites. Hence the expectant tactics of Russia. On this path, Russia further became for Europe a kind of “new West,” instead of the United States. However, anti-Russian sanctions and the policy of “import substitution” of Russia exhaust this path. Today, Putin is following the path of Russia’s final divorce from Europe, and Crimea seems to become the Russian-European Rubicon.

The second way is becoming increasingly relevant for Russia: the Eurasian project, a turn to the East. It is becoming and more and more real: the gas pipeline to China “Power of Siberia” has already been commissioned. In Europe, for example, President Macron understands this, and begins to play along with Trump in his desire to "get along with Russia," but Moscow believes in business, not in tears, but there is no business ...

Ctrl Enter
Noticed a mistake Highlight text and press. Ctrl + Enter
We are
A great interview with Sergey Lavrov: about Ukraine, Obama and IranWhat you didn't want to know about England
25 comments
Information
Dear reader, to leave comments on the publication, you must to register.