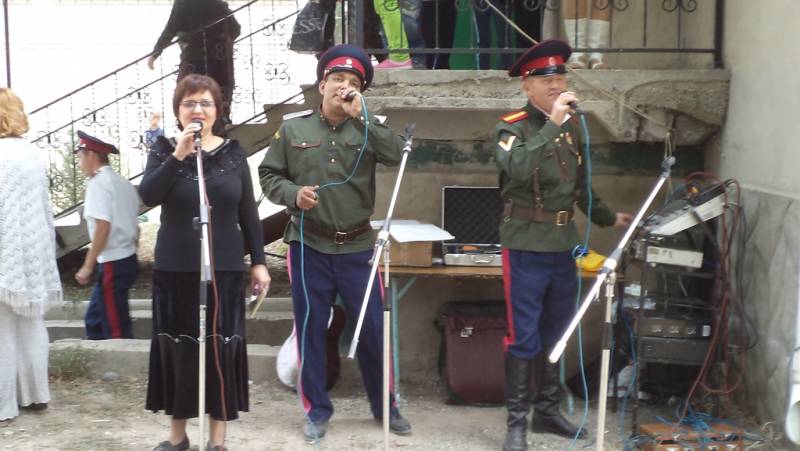 In many Russian media in recent months, materials have appeared and continue to appear with the same thesis: Russia is losing the post-Soviet space due to the improper use of “soft power”.


The reasons for this are different: either Russia is too kind to its former union republics, then it lives in the past and believes in the loyalty of the same post-Soviet republics, while pretending not to notice how the population of these countries has long been processed by our western opponents.

The authors of these articles are largely right. We really act the old fashioned way, relying on the power of the “kokoshnik” and the “Russian romance”, hoping that the near abroad will “buy it” and remain in the orbit of our influence.

But there is one more “but” that is rarely paid attention to. We do not know how to choose partners, program operators of the very “soft power”.

In this direction there are incidents that would not have been possible in other countries, and this could not have happened by definition by the Soviet Union. But this happens with our modern Motherland, and these cases are repeated.

The most striking example is in Kazakhstan, our most strategic partner in the near abroad. The site "Cossack Information and Analytical Center" spoke many times about the "universal ataman" - Yuri Filippovich Zakharov. From the articles posted on this resource, it is known that this social activist created several Cossack and Russian-Slavic associations, and recently began to demand reparations from Russia in the amount of 5 billion US dollars for the "genocide of the Cossack people." For this, he demanded from us the island of Sakhalin, where, in his opinion, he could revive the Cossacks.

But, most importantly, among the Cossacks he began to impose anti-Russian ideologyputting at the forefront ... the figure of SS gruppenführer Helmut von Pannwitz and his now living grandson, whom he declared symbols of the inviolability of the Cossack spirit for all Cossacks, white and red, as well as symbols of reconciliation between the Russian and German people.

It is hard to believe, but in such demands for reparations there are parallels with the fulfillment of instructions to implement US plans to split the Russian Federation.

It was according to the American law “On enslaved nations” that the myth about the genocide of the Cossack people was born, which was based on the idea, framed back in Nazi Germany, about the Cossacks as a separate ethnic group. That is, speaking the official language, this is at least the execution of “instructions” in the territory of a third country in favor of the United States.

And, perhaps, the spread of an ideology heroizing the Nazis, which is a criminal offense under our criminal code, article 354.1. Criminal Code of the Russian Federation.

Apparently, therefore, according to rumors, the entry into Russia was closed for Yuri Zakharov. But before that, he used the location of the former head of the Rossotrudnichestvo representative office in Kazakhstan, Viktor Nefedov. Even speaking at the UN ECOSOC, the “ecumenical ataman” in 2017 did not miss the opportunity to boast that Rossotrudnichestvo provides premises and assistance for its activities. Could it be that SS Specialist Helmut von Pannwitz and his grandson are advertised ?! Most likely, it was so, because the exploits of these “symbols” of Zakharov’s ideology were described in the newspaper “Cossack Courier”, which was distributed at events sponsored by Rossotrudnichestvo in those years. 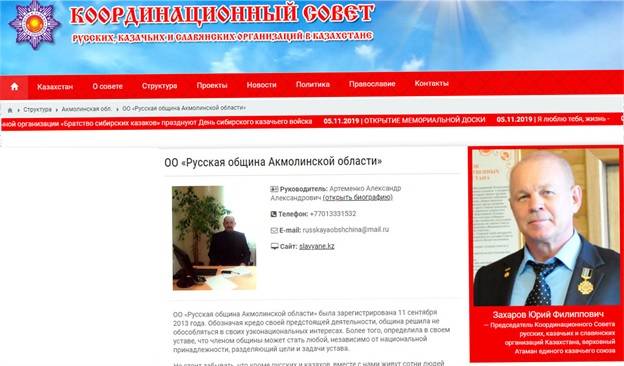 But now Nefedov was sent to Bishkek. And Zakharova was blocked from entering Russia. But these are half measures. On the topic that Zakharov is banned, if true, for some reason complete silence reigns.

And most importantly, his associates remained through whom he always acted and continues to act.

In 2017, when he headed the ROC, an organization that is part of the Zakharov Coordination Council of Russian, Cossack and Slavic organizations, he officially announced that he fully supported Yuri Zakharov. It was when he was elected that Yuri Zakharov handed the saber to his grandson Pannwitz in gratitude to him and his grandfather-gruppenfuhrer. And once again he made a speech that both Pannvitsa are symbols (!) Of the Cossacks.

In addition, the new head of the “Russian Community of Kazakhstan” Artemenko issued a resolution on the day of his election, in which he stood up for his patron, calling for the creation of a parliamentary commission on the fact of falsification of criminal cases against the chairman of the Coordination Council, Russian, Cossack and Slavic organizations, that is, the same "Universal chieftain." You can read about all this in the newspaper “Cossack Courier” No. 10-11 (150-151) dated November 03, 2017.

The “Russian community” in Kazakhstan actively carries through the newspaper “Cossack Courier” to the masses all these ideas, distributing it for free in the Friendship Houses that operate at the regional Assemblies of the people of Kazakhstan, as well as distributing them at events and during church services in Orthodox churches. The active "postmen" of the "Russian community" are the Cossacks.

On the pages of the newspaper are adjoining ... the presidents of Russia and Kazakhstan, all the same Pannvitsy, Patriarch Kirill and Ecumenical Patriarch Bartholomew.

In the same issue of the newspaper, it is indicated that the Country Council of Compatriots of Russia, created by the Russian Ministry of Foreign Affairs, "is breaking up Russian and Cossack organizations."

In the same issue of the newspaper, another right hand of V.P. Zakharov, Mikhailovsky, talks about how the Russian Orthodox Church of the Moscow Patriarchate is introducing an ever greater split into the Cossack movement. And he also offers to rehabilitate the Cossacks to give the "universal ataman" the island of Sakhalin.

No, no, yes, ghostly laudatory materials addressed to Krasnov and Shkuro will be held on the pages of the publication.

In December 2015, another material was published in the newspaper Cossack Courier No. 11-12 (127-128). It was called "Fundamentals of Cossack life." As the authors pointed out, this publication was prepared to help activists of the Coordinating Council in the regions on political and educational work with Cossacks and youth.

What did the representatives of the Zakharov Council suggest teaching? Here are direct directions, quote:

“From ancient times, the Cossacks did not recognize either the Byzantine or Moscow Patriarchate ... the“ obsessed ”priest (walking against the Cossack honor, the will of the Circle (Rada), the Cossacks could flog ...”
At the same time, Artyomenko takes part in the construction of the church in Kokshetau and immediately supports the statements and dissemination among the Russian population of Kazakhstan of theses on the negative role of the Russian Orthodox Church of the Moscow Patriarchate.

Hiding under the guise of virtue, it is convenient to introduce ideological viruses: either we build churches, or we hold events for the glory of the Great Victory - and we are already considered leaders of public opinion by both Russian and Kazakhstani authorities. And then, as they say, between the lines, there are stories for young people about the harm of the Moscow patriarchy and the real "heroes", such as Krasnov, Shkuro and Pannvits ...

The recipe for an ideological struggle with us at our Russian expense is not just perfect, but brilliant ... 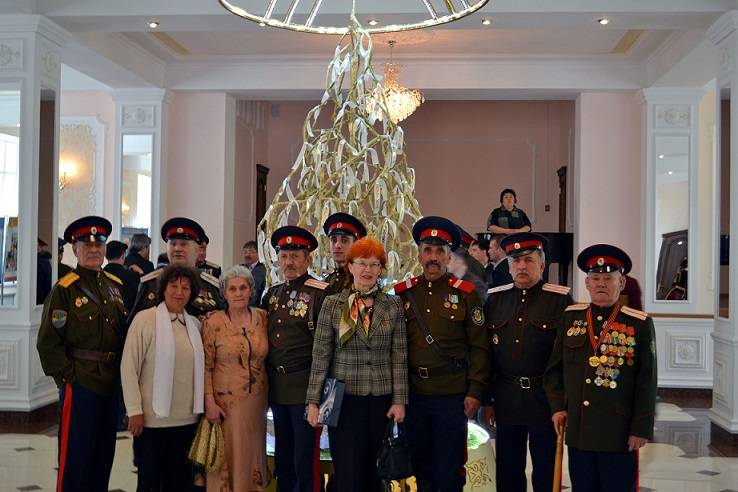 So, returning to our “soft power” ... If we work with such partners, then we should not expect any positive changes. On the contrary, in the Russian underbelly one more “Maidan” may occur, stronger than Kiev.

This is understood in Nur-Sultan. And this is probably why the Kazakh National Security Committee veteran V.K. Bozhko was appointed to lead the counterweight to the Zakharov structure, apparently in order to stop the possible use of the “Russian map” to undermine Eurasian integration and security.

And I think there they ask: why do our departments continue to support the “Zakharovites” who participate in the glorification of the Nazis and their henchmen and infect the Cossacks with anti-Russian ideology?

Probably, in Kazakhstan they made the right conclusion: the lesson of Ukraine did not teach Russia anything.

Therefore, by and large, they are not going to hope for Russia's help in the field of security there and are cautiously watching how, after Kiev, Rossotrudnichestvo makes the same mistakes in Nur-Sultan.

Just in case, if common sense wakes up among Russian officials, we attach a list of all organizations that are members of the Zakharov Coordination Council.

We are in Yandex Zen
About Stalin and Khrushchev
What you didn't want to know about England
136 comments
Information
Dear reader, to leave comments on the publication, you must to register.