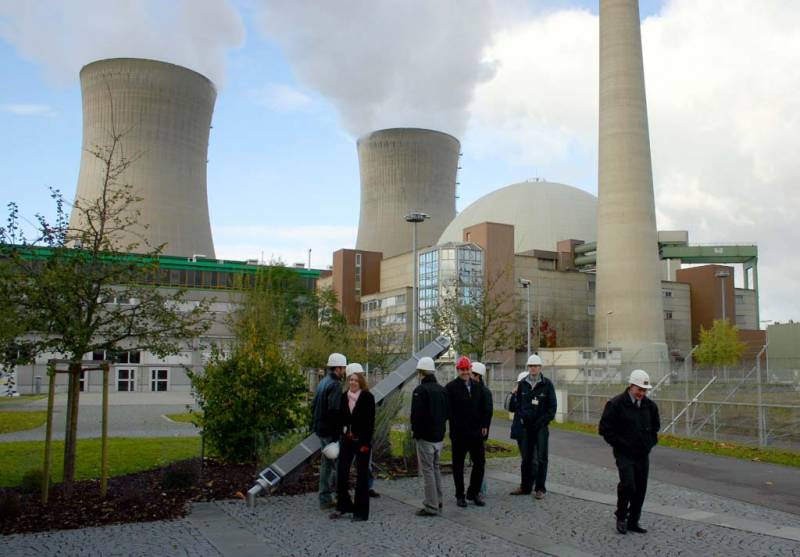 Berlin's firm intention to completely abandon the generation of electricity at nuclear power plants by 2023, of course, is very commendable from the point of view of environmental activists and the rest of the public, for whom the mere thought of operating nuclear reactors in the country causes horror and panic. But only in the context of the real economy, this initiative does not look so attractive. Rather, quite the opposite ...

In fact, the first heated discussions about the permissibility of using nuclear power plants in the energy sector began in Germany as early as the 70s of the last century, quite expectedly sharply escalating after the accident in Chernobyl in 1986. Ultimately, after the government headed by Gerhard Schroeder came to power, in which the positions of the "greens" were extremely strong, a corresponding law was passed envisaging a complete rejection of nuclear energy by 2022. Angela Merkel, who, we must give her her due, looks quite realistic at most economic issues, tried if not to refuse this declaration, then at least extend the life of the nuclear plants. But then it exploded already in Fukushima ...

Nowadays, the almost absolute triumph in Europe of the ideas of Greta Tunberg, the question of whether or not to be "terrible and dangerous" nuclear power plants, is not worth it in principle. But at the full height there are many other problems, reflections on which environmental jealousy who look at the world through pink-green glasses usually do not bother. Close the plant is a real thing. But ... Firstly, electricity will still have to be extracted - in one way or another. The effectiveness of its “renewable sources”, with which all the same adherents of Greta are so fond, is, to put it mildly, greatly exaggerated. Therefore, it will be necessary to return to the good old thermal energy. Well, the Germans are unlikely to burn coal - otherwise the "green" will again make a complaint. Rather, the new TPPs will run on “blue fuel” - but the whole problem is that certain forces pose obstacles to the implementation of the Nord Stream-2 project. And these stations still need to be built.

The amount of money that Berlin will have to fork out for converting power generation to nuclear-free rails cannot be compared with the absolutely enormous costs that are required for dismantling the suddenly become unnecessary nuclear power plants and the disposal of nuclear fuel. The construction of a nuclear power plant in Mülheim-Kerlich took a decade, but the work aimed at wiping it off the face of the earth, which began in 2004, threatens to drag on for a quarter of a century at least. At RWE, which owns the nuclear power plant, they say that at least 1700 tons of radioactive materials will have to be removed and buried. According to the highest safety standards in force in the European Union, repositories for spent fuel must be designed for a million years of storage! And this is only one nuclear power plant, and in Germany there are only 8 of them operating (one with two reactors).

If initially in Berlin they expected to manage the sum of 22 billion euros for covering and demolishing nuclear power plants and a little less, 17 billion, for solving the problem of radioactive waste, then recent studies by economists in this field indicate that the total "estimate" on this issue will inevitably grow up to 50-70 billion euros. And this is at least. For the German economy, which is already far from in good shape, this could be a crushing blow. Last year, the country's GDP growth showed a result, the worst in the last 6 years - only 0,6%. At the end of last year, the Bundesbank spoke extremely pessimistically about the country's further economic prospects, calling just one of the main reasons for the decline in industrial production and inflation growth

an increase in the price of electricity associated with government measures aimed at implementing environmental improvement programs.
Berlin’s sometimes striving for reasonable limits to the utmost "greening" at any cost can cost not only Germany alone. After all, it is not a secret for anyone that it is precisely today that it is the economic locomotive of the entire European Union.

This is especially true now, after leaving the UK organization. In the event of serious problems and systemic failures in the industrial, energy, and financial sectors of the German economy, the whole Old World will not be enough. Organizations such as the IMF and the World Bank are already scaring the European Union with recession, stagnation, and widespread crisis looming on it.

Who knows, whether the multibillion-dollar costs of closing down German nuclear power plants will not be the very last straw that will cause all these disasters that Europe will receive in reality, trying to avoid problems largely contrived by enthusiastic environmental activists. Germany without nuclear power plants, coal and blocked gas projects can really turn from an EU economic locomotive into an environmentally friendly and economically impoverished country with millions of migrants who are frankly unwilling to work for the good of the German economy.

We are in Yandex Zen
In Japan, the last nuclear reactor was stopped
Japan is going to shoot a "methane hydrate gun" to impress Russia
168 comments
Information
Dear reader, to leave comments on the publication, you must to register.