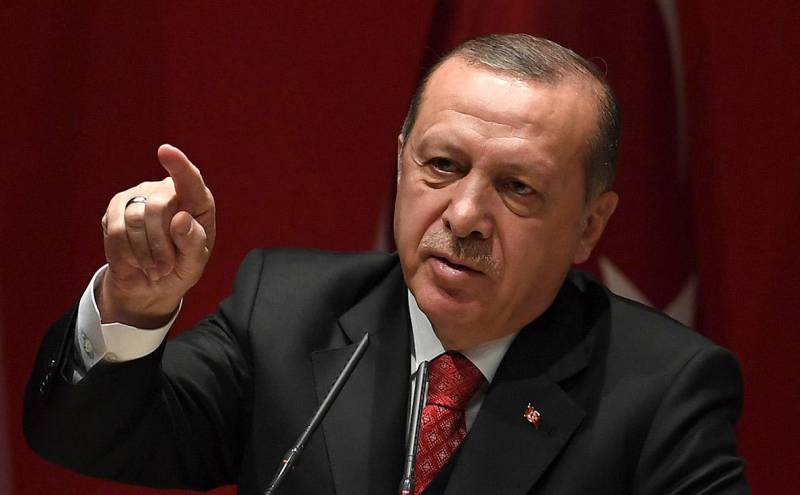 The aggravation of the situation in the Syrian province of Idlib puts the Middle East at risk of an even more serious conflict. Turkish President Recep Tayyip Erdogan sprinkles undisguised threats against Syria. It came to direct clashes between the Syrian and Turkish military. There have been two of them lately: February 3 and 10. As stated in the capital of Turkey, in response to attacks on 115 Syrian targets and dozens of ATS soldiers were killed.

Erdogan accuses official Damascus of killing civilians in Idlib province (which, however, has long been a tradition) and of killing at least 14 and injuring 45 Turkish army personnel. And also - in the desire ... to liberate the territory of the above province (what a terrible accusation: the Syrian army wants to free the Syrian lands!)

Moreover, the insinuations of Ankara are addressed not only to the neighboring long-suffering country, but also to Russia - they say, she also takes part in attacks on the civilian population of Idlib.

Erdogan threatens that he intends to bring down any aircraft, which, in his opinion, will attack the settlements of the Syrian province. In addition, he does not exclude attacks on the positions of the Syrian army and outside the de-escalation zone. In fact, the point is that the Turkish leader would like to carry out direct aggression against any Syrian city, including Damascus.

We will act. Until the end of February, we will force the regime’s forces to leave the zone defined by the Sochi agreement. They should know that they will be attacked, even if their attacks will be carried out all the borders of the Sochi agreement.
Such threats come from the mouth of Erdogan. He claims that his country tried to act “within the framework of the Sochi agreements”, but other parties are not keeping their word.

Turkey and USA together again

As you know, at the negotiations between Russia, Iran and Turkey in the framework of the Astana format in May 2017, it was possible to agree on the creation of four “de-escalation zones”. However, constant attacks by terrorists forced the SAR army to stop provocations and liberate territories from which shelling of peaceful settlements was too often carried out. Since then, only one de-escalation zone has remained - the Idlib. It also includes some territories of the provinces of Hama, Aleppo and Latakia.

In September 2018, an agreement on Idlib was concluded between the Russian Federation and Turkey. It was decided that 12 Turkish observation posts would be deployed in the Idlib de-escalation zone. Ankara blames Damascus for the deaths of its military men, who served at these points. It is silent at the same time that it itself does not comply with its obligations to disarm the terrorists in the province.

Moreover, Turkey, forgetting about past differences with the United States, seeks help there. Thus, the Minister of Defense of this country, Hulusi Akar, said that he was waiting for "concrete support" from the United States and NATO.

Meanwhile, the Syrian army, despite heavy losses, is confidently liberating the territory of Idlib province. In particular, the strategically important city of Sarakib was taken under control.

All the hysteria raised by Erdogan has the goal of preventing the final defeat of terrorist groups in Syrian territory. Which is not surprising. Only occasionally, in negotiations with Russia, the Turkish leadership uses peacekeeping rhetoric, and in between the talks Ankara threatens Damascus with terrible punishments.

And it’s okay if you just threatened. But we are talking about direct support for the militants. In this light, the death of the Turkish military looks like a deliberate provocation - to deliberately expose them to attack the Syrian positions, put ultimatums and seek support from the US and NATO.

What position the Alliance will take is not even a matter of guessing. NATO Secretary General Jens Stoltenberg at a press conference condemned Syria for "brutal use of violence" and "monstrous attacks on the civilian population." Nothing new - the same expressions, with deliberate escalation of emotions, are heard throughout the Syrian conflict, starting in 2011. And since 2015, the West has also been pushing for the fact that Russia, supporting Damascus, is also guilty of this “brutal violence”.

Do not differ in originality and the United States. Thus, Kay Bailey Hutchison, the Permanent Representative of this country to NATO, assured Turkey of her support. And the State Department’s special envoy for Syria, James Jeffrey, said during a trip to Ankara that Russia and Syria were threatening Turkish forces in Idlib!

As soon as the defeat of terrorist groups in Idlib province became real, it was as if past differences had ceased between Washington and Ankara. They again act as a united front.

The position of Syria and Russia

The Syrian Foreign Ministry reiterated that the Turkish military are in the country illegally.

The Turkish regime bears full responsibility for the consequences of this presence,
- said in a statement by the foreign ministry, and also stated that the army of the SAR will continue to fulfill constitutional duties to combat terrorism.

As for Russia, the Foreign Ministry spokeswoman Maria Zakharova during a briefing accused Ankara of violating the Sochi memorandum, as well as of the transfer to the territory of Syria (and Libya) of terrorist groups.

The whole question is whether it will be possible to save the notorious Astana format. Judging by the situation, it bursts at the seams, and all the efforts of three years can go to landfill. However, Zakharova expressed cautious optimism:

We expect that in the coming period, Russian and Turkish representatives will continue to work to develop a comprehensive solution to the Idlib problem.
The main question remains: how to calm the raging Turkish "Sultan" and is this even possible? So far, you can see that all the friendly steps taken by Moscow in his direction - both the actual forgiveness of the death of the Russian pilot Oleg Peshkov, and the rescue of Erdogan from an attempted coup in July 2016, and cooperation in the supply of military equipment - were not appreciated. No matter how much you feed Erdogan, he still looks towards Washington and NATO.

We are in Yandex Zen
What you didn't want to know about England
Interview of President Bashar Al-Assad to the Sunday Times newspaper
59 comments
Information
Dear reader, to leave comments on the publication, you must to register.