July 24 2012
3
Difficult for Russia period of the end of the XVIII beginning of the XIX century opened a galaxy of outstanding commanders and admirals, but there are those whose fame in civil affairs is no less than the success of the military.

One of these people was Mikhail Semenovich Vorontsov. He was born 30 May 1782, his childhood was spent in London. Father - Count Semyon Romanovich Vorontsov, three years after the birth of his son, was appointed ambassador of Great Britain. In 1784, the wife of Count Vorontsov dies of acute tuberculosis. The second time, he never marries, devoting himself entirely to raising children: Michael and Catherine.

For his son, Semyon Romanovich personally compiled curricula, which included such subjects as languages, mathematics, история, natural sciences, fortification, architecture, music. As a result, Mikhail Vorontsov was fluent in 5 languages: Russian, French, English, Greek and Latin, versed in art and literature. Among other things, he attended, along with his father, meetings of the parliament and industrial enterprises, and also visited Russian ships visiting English ports.

Another important element in the education of Vorontsov Jr. was the craft. From childhood, he began studying carpentry, which remained his passion until the end of life.

By the age of four, Mikhail Semenovich was promoted to ensign of the Preobrazhensky Regiment, in which he was enrolled as a child. Such was the way to circumvent the service life established by Peter the Great for the nobility.

In 19 years, Mikhail Semenovich gets a brilliant education and is produced by Paul I in the chamberlains. However, Vorontsov Sr., aware of the impermanent character of the emperor, decides to postpone his son's trip to his homeland. Probably, the graph, being an experienced politician, guessed how Paul’s inconsistent behavior would soon end.

By the accession of Alexander I, Mikhail Vorontsov was already in Petersburg, where he met with officers of the Life Guards Preobrazhensky Regiment. Here Vorontsov decides to devote himself to military affairs. 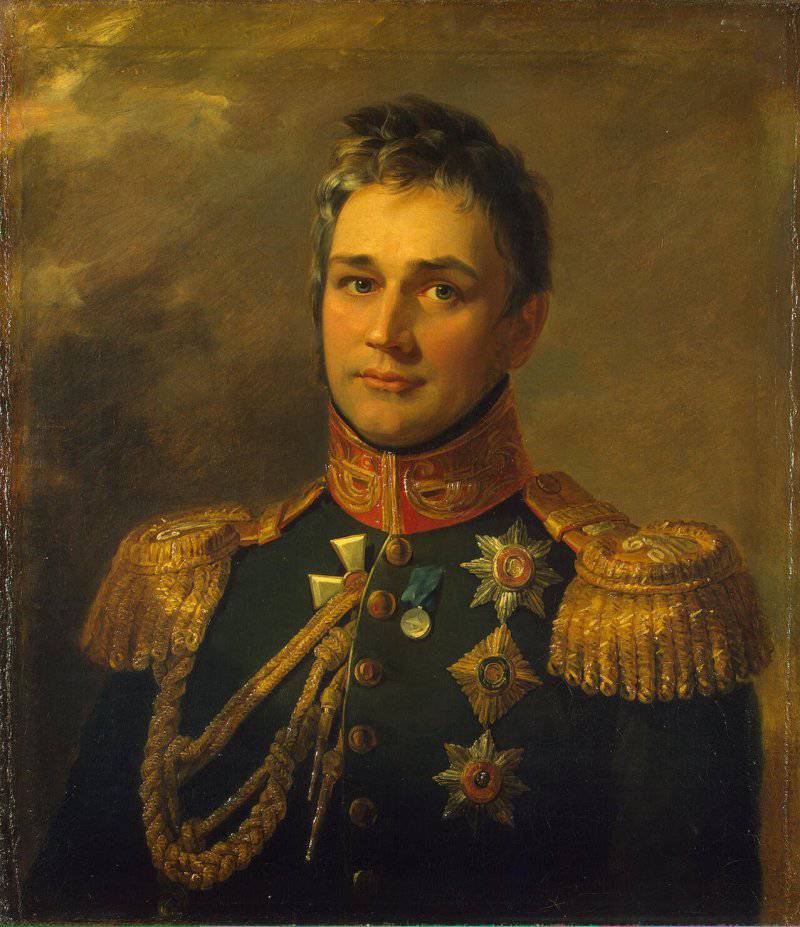 The title of chamberlain gave the opportunity to join the military service in the rank of Major General. But Mikhail Semenovich neglects this privilege and asks to enlist his army in the lowest rank. His request is fulfilled, and he becomes a lieutenant of the Preobrazhensky regiment.

In the company between the drill and the duty, Vorontsov is not attracted to the party company, and in 1803, he volunteers to go to Transcaucasia to the army of Prince Tsitsianov. Having fully demonstrated his talents and personal courage, Mikhail Semenovich is honored with the rank of captain, as well as the orders of St. Anna 3 degree and of St. Vladimir and St. George 4 degree.

Since 1805, Voronov has been involved in the Napoleonic wars. In September of the same year, as part of the army of Lieutenant-General Count Tolstoy, he blocked the Pomeranian fortress of Hameln. In 1806, he participates in the battle of Pultusk, and in 1807, as commander of the 1 battalion of the Preobrazhensky regiment, in the Battle of Friedland.

After the conclusion of the peace of Tilsit, Vorontsov fights against the Turks. In 1809, the Narva regiment is subordinated to. Participates in the storming of Bazardzhik, in the battle of Shumla. In the Balkans, where Vorontsov was sent in the autumn of 1810, he took Pleven, Selvi and Lovcha.

In the 1811 year, already under the command of Kutuzov, he distinguished himself in the battle of Rushchuk, for which he was granted a golden sable with diamonds; in the 4 battles of Calaf and in the battle of Vidin.

The beginning of the 1812 war of the year meets Bagration's 2 Army, with which it retreats to Smolensk. Takes part in the Battle of Smolensk then at Borodino.

In the battle of Borodino commanded 2 th combined grenadier division. The division took the first battle in clashes with Shevardino. Vorontsov's division, together with the 2 grenadier, counterattacked the French and knocked them out of a busy village. The battle for the Shevardino redoubts delayed the advance of the French and allowed them to strengthen their positions near the village of Semenovskoye, later called the Bagration flash.

Here, the 2 th Grenadier Division Vorontsov will take on the most powerful blow of the French. Against the 8 of thousands of Russians, Bonaparte concentrated 8-9 divisions totaling up to 40 thousand and about 200 guns. Vorontsov was seriously wounded, personally leading his grenadiers to the bayonet attack. The division almost at full strength died in the battle for flushes.

The wounded earl was taken to Moscow, whose hospitals were filled with wounded. At the same time, the servants were engaged in saving the lordly property. The Vorontsov mansion before the arrival of Mikhail Semenovich was no exception. Graf ordered the release of carts and use them to transport the wounded to his estate. The treatment there were about 50 officers and more than 300 privates. Each recovered was provided with clothing and 10 rubles for expenses.

As soon as he recovered, Vorontsov returned to service. He is appointed to command a separate flying squad as part of the Chichagov army.
Vorontsov takes an active part in the foreign campaign of the Russian army. He fights in the “Battle of the Nations” at Leipzig, then in Kraon he managed to stand against the superior forces of the French, which Napoleon led. A little later, during the storming of Paris, he occupied the outskirts of la Villette.

In 1815, Vorontsov was appointed commander of the occupying corps stationed in the French capital. Here a whole heap of administrative and organizational problems falls on him. However, Vorontsov successfully copes with them. For soldiers and officers, a kind of code of conduct was developed that prohibited disrespect and corporal punishment of soldiers. On the initiative of Vorontsov and on the basis of the curriculum he himself compiled, schools for lower officers and soldiers are organized, where senior officers teach writing and grammar.

When, in 1818, the corps Vorontsov left France, he paid off all the debts for his officers, who they had done in his three years in Paris. According to some reports, Vorontsov sold his estate for this. 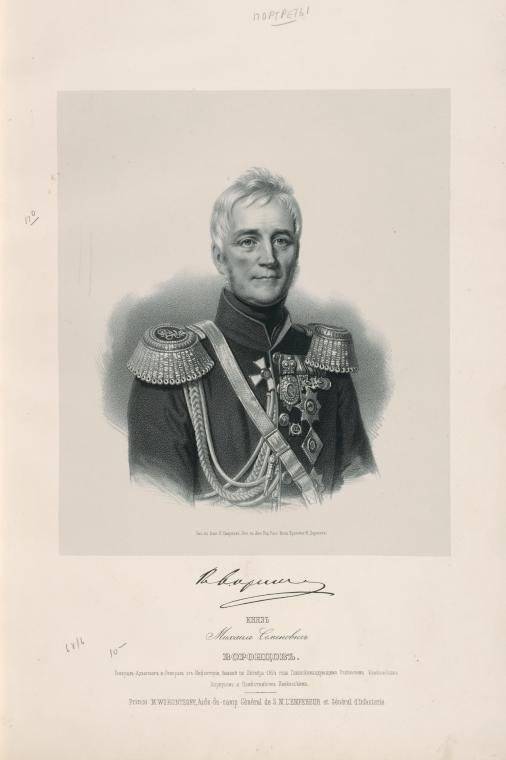 In St. Petersburg, Vorontsov's initiatives were not appreciated even by order, which tasted the charms of the autocracy of Alexander I, the corps of Mikhail Semenovich “permeated with the Jacobin spirit” was disbanded.

Later, having rejected Vorontsov's resignation, Alexander appoints Mikhail Semenovich to command the 3 infantry corps.
In 1820, Vorontsov participates in an attempt to create a "Society of Good Landowners," which was supposed to deal with the issues of liberating the peasants from serfdom. But the emperor forbids this.

7 May 1823, Vorontsov is appointed to the post of Governor-General of Novorossia and Plenipotentiary in Bessarabia.

At first glance, assessing the potential of the undeveloped land, Vorontsov vigorously takes on the case. Under his leadership, in the area they begin to grow grapes; experienced breeders are invited for this purpose, various grape varieties are written out.

A network of educational institutions is being created in the region, including for girls, the first public library is opening. Odessa is acquiring a number of beautiful buildings designed by talented architects, and the entire Crimean peninsula is provided with an excellent highway along the southern coast of the peninsula.

Vorontsov organized the search and mining of coal. And the first in Russia created a shipping company.

In 1826, Vorontsov together with Ribopier was sent to negotiate with Porto, and in 1828 he again used his military talents, taking command of the wounded Menshikov, during the siege of Varna.

In 1844, Vorontsov was appointed governor of the Caucasus with unlimited powers. The long-suffering region, which by that time had been waging a partisan war against the Russian Empire for more than 20 years, required a special approach. Mikhail Semenovich clearly understood that Shamil could not cope only with bayonets. The march on Dargo showed it to Petersburg. After this, the tactics of war change dramatically. Through the forests of Chechnya and Dagestan, broad glades are made, strong points are set up. Perhaps it depended much more on the civil component in this war than on the military. And now Vorontsov, after Dargo, raised to the dignity of a prince, was definitely convinced of this. His policy of toleration, ethnic tolerance and equality of all before the law has given abundant results. A vivid illustration of this is that the Turks who invaded the Caucasus during the Crimean War did not receive wide support from their co-religionists.

In March, 1854, at the age of 70, Mikhail Semenovich Vorontsov asked for resignation due to a sharp deterioration in his health.

In August, Alexander II awarded 1856 the title of Field Marshal for exceptional merits to the Most High Prince Vorontsov.

And in November of the same year in Odessa Vorontsov dies. On the last journey under the gun and cannonade escorted him the whole city.

The Most High Prince Vorontsov is a role model and an example for any modern military and politician.