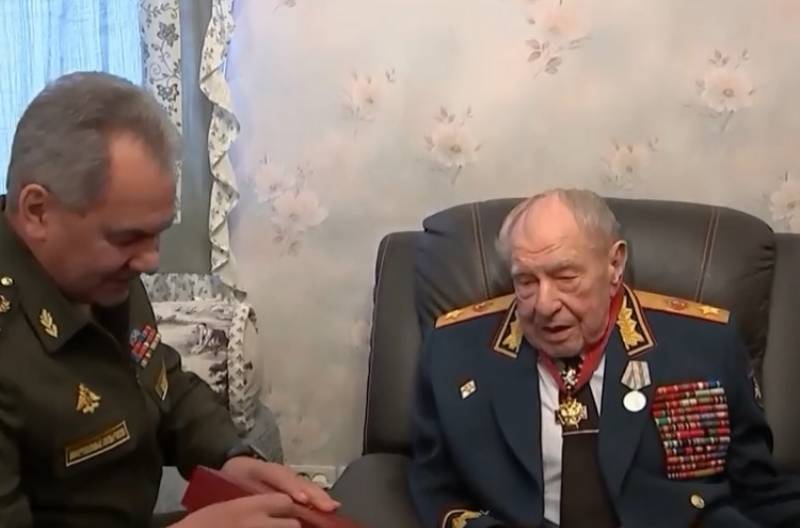 The head of the Ministry of Defense of the Russian Federation Sergey Shoigu personally visited the last head of the defense department of the Soviet Union Dmitry Timofeevich Yazov to award him with the Order of Merit for the Fatherland, XNUMXrd class. The award was awarded to Marshal of the USSR for the development of veteran organizations and effective work on the military-patriotic education of the younger generation.


In addition, Sergey Shoigu awarded Dmitry Timofeevich with the jubilee medal “75 years of Victory in the Great Patriotic War of 1941-1945”, since Yazov took part in the war since 1942, when he was only 17 years old. The future Minister of Defense then added one year to his age in order to be in military service in November 1941. Yazov got into the army in July 1942, was twice seriously wounded and received the Order of the Red Star for his services.

From 1987 to 1991, Dmitry Timofeevich Yazov served as Minister of Defense of the Soviet Union. Last fall, he turned 95 years old.

During the visit, the acting Minister of Defense of the Russian Federation Sergey Shoigu thanked Dmitry Timofeevich for his activities, wished the only living Marshal of the Soviet Union good health and presented him with the book “History Russian state ”, written by Nikolai Karamzin.
Ctrl Enter

We are in Yandex Zen
90-year anniversary of the marshal of the Soviet Union D.T.Yazov
Marshal Yazov spoke against the entry of Russian troops into the territory of the DNR and the LC
242 comments
Information
Dear reader, to leave comments on the publication, you must to register.