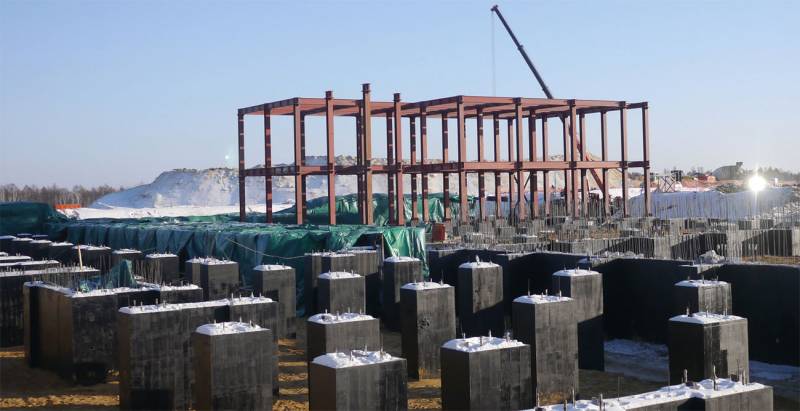 In January, the first stage of the sanitaryware ceramics plant was commissioned in Orel. On the same days, the Belgorod Region launched the first stage of production of high-tech telecommunication equipment. In the Tula region, a factory of synthetic and natural knitted fabrics began to work. A complex has been put into operation at the Seversky Pipe Plant to increase the strength of pipes, and in Novokuybyshevsk, the first complex in Russia for the production of catalysts for hydraulic processes has been commissioned.

What the Russian media did not notice

This is not an exhaustive list of new factories, workshops and production facilities, which replenished the industry of Russia in the just completed January. This month is not indicative. Still, the country was plunged into holidays for a decade.

December is another matter. "Under the Christmas tree" in Russia opened 40 agricultural enterprises and 19 new industries. Federal media these news for the most part ignored. Moreover, some information managers believe that such messages should be published as advertisements, for a fee.

In fact, perhaps they might be interested in some kind of production of sanitary ware and porcelain in Orel, if the cost of the whole complex is 5 billion rubles, and the number of newly created jobs will not exceed 500 ...

Indeed, last year the federal media “did not notice” the commissioning of the ZapSibNeftekhim SIBUR group in Tobolsk. Meanwhile, this is the largest petrochemical project in post-Soviet Russia. Investors spent almost ten billion US dollars and five years on the construction of the complex.

Now ZapSibNeftekhim from associated petroleum gas and gas condensate from the Purovsky plant produces its own propylene and polyethylene. With the plant reaching its design capacity, the country will get rid of the need to purchase these polymers abroad. Moreover, ZapSibNeftekhim products will be exported to Asian countries, expanding Russia's export opportunities.

Why didn’t the media notice such an important object for the country? One version floats to the surface. The construction of the Tobolsk plant did not entail major corruption scandals, which attracted the attention of the press. The reason is simple - the project was funded from extrabudgetary sources, and private investors know their money.

The Vostochny spaceport is another matter. The builders there are well heated hands on budget financing. The media talked about this a lot and enjoyed it. The object itself was given minimal attention. And he deserves more.

For some ten years (the “Memorial Sign” in honor of the beginning of work was laid in 2010), a city with associated transport infrastructure, an installation and preparation plant for missiles for launch, a modern launch complex for light and medium class missiles and other objects.

Already in April 2016, the first successful launch of the Soyuz-2 rocket, which delivered three artificial satellites to Earth’s orbit, took place from the new cosmodrome. "East" is now being mastered, preparing new missile launches. Build it the second phase.

From the Baltic to Primorye

They say that the spaceport is a gate to the sky. In the Leningrad Ust-Luga, Russia has opened a new path to Europe. The government of the country began to build this port back in 1993, in order to avoid problems with exports through the Baltic countries. However, by the new century only the forest terminal had been mastered.

Large-scale work on the construction and development of the port began in December 2000. Since then, powerful high-performance complexes for mass transshipment of coal, mineral fertilizers, oil, sulfur, liquefied hydrocarbon gases, fish, containers, rolling and other cargoes have appeared here.

From the Baltic we will be transported to Primorye. Since 2009, a new large shipyard of Russia, the Zvezda shipbuilding complex, has been built here in Bolshoi Kamen Bay. In 2016, the first phase of the new production was commissioned. Now they are in full swing building supply vessels for hydrocarbon production projects on the continental shelf and large-capacity tankers of the Aframax class.

In 2020, the largest dry dock in Russia, 500 meters long, should be handed over to Zvezda. He is already in the second stage of the shipyard. It is planned to be commissioned in 2024. Then, the new complex will have the opportunity to build ice-class vessels, oil offshore platforms, gas carriers and tankers with a displacement of 350 thousand tons, up to 300 meters long and 75 meters wide.

Along with the completion of the construction of a shipyard in Bolshoi Kamen, nearby, in the Amur Region, the largest gas processing plant in Russia should be launched. However, he and the world will have no equal, for the production of helium, for example, - 60 million cubic meters. m per year. Amur Gas Processing Plant will produce 42 billion cubic meters per year of natural gas.

In the new century, large-scale construction projects of the economy can be found on the entire map of Russia. These are the sea and Siberian gas pipelines known to the country, the Crimean bridge, the Neva expressway, the Leningrad NPP-2, the Yamal LNG Arctic complex for liquefying natural gas, the Primorsk port for the Baltic pipeline system, the Amur-Yakutsk railway, the Bureyskaya hydroelectric station, and the power units at the Kalinin, Novovoronezh and Rostov nuclear power plants, the bridge across the Kola Bay in Murmansk, the Amur federal highway, large cement plants in Tula and Kolomna near Moscow, the Iron Ozone 32 electric steelmaking complex on Per ouralskom Pipe Plant and more tens and hundreds of others that are important for the country objects.

We are in Yandex Zen
Situational analysis of the death of the MH17 flight (Malaysian Boeing 777), made on the basis of engineering analysis from 15.08.2014
Results of the week. “In our cooperative, the board is always agreed”
228 comments
Information
Dear reader, to leave comments on the publication, you must to register.