CSTO. There is a contract, but will there be security? 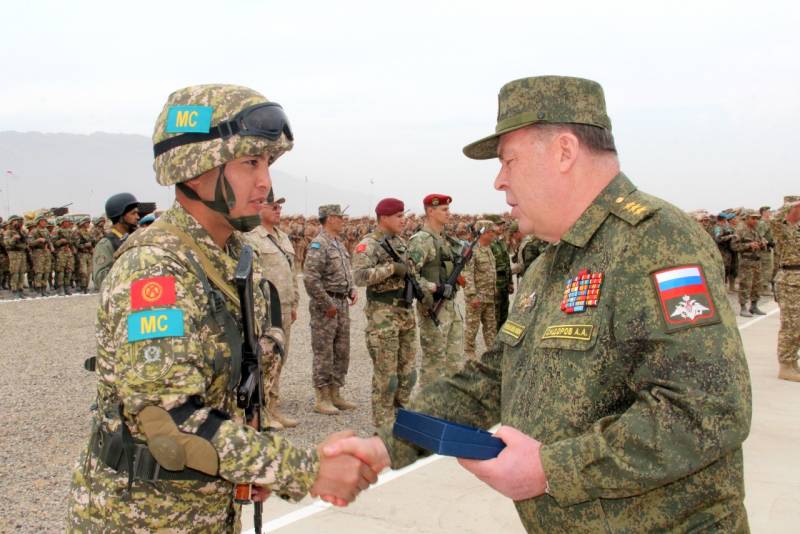 Let's be honest: the briefing recently held by Colonel-General Anatoly Sidorov, chief of the Joint Staff of the Collective Security Treaty Organization, did not add optimism or confidence in tomorrow. The main leitmotif of the general’s speech was the concern that the NATO member states, in fact, the most likely military adversary for the CSTO member countries, have recently sharply increased their aggressive preparations and their own, clearly unfriendly presence at the borders of these countries. In the light of what has been said, a more than logical question arises: to what extent is the military-political alliance uniting today Russia, Belarus, Armenia, Kazakhstan, Tajikistan and Kyrgyzstan capable of withstanding the challenges it faces?


This is not about trifles at all: according to General Sidorov, the Alliance in recent years has increased the group of troops of 12 thousand personnel and more than 700 units of military equipment, which includes representatives of the armies of its various members, on the western borders of the CSTO. First of all, the military units deployed in Poland and the Baltic states cause concern. Currently, this process is becoming more and more intensive and global in scope: airbases are being modernized, logistics chains are being improved, everything is being done to strengthen the alliance's capabilities to transfer large army contingents to the east as quickly and as massive as possible.

No less disturbing is the situation on the other “flank” of the Organization - the southeast. There, NATO is trying (and, alas, by no means unsuccessfully) to turn Georgia into its own outpost, which provides increased support in the military sphere, seeking to use this state, as Mr. Sidorov noted, as “the main tool to counter Russia and build up its military influence in the Caucasus ". In a word, the enemy is advancing in all directions ... But what about us? 2019 was rich in various events within the framework of the CSTO: on September 12, the 28th meeting of the Interstate Commission for Military-Economic Cooperation of the Organization was held in Yerevan, on November XNUMX, a session of the Collective Security Council of the Collective Security Treaty Organization was held in Bishkek, in which the heads of the organization’s member states participated.

Already this year, consultations were held at the Joint Headquarters of the Organization, during which senior representatives of the military departments of its member states discussed a draft joint action in the field of operational and combat training for the coming year 2021. In addition, on January 1, 2020, the new CSTO Secretary General, Major General Stanislav Zas, assumed office until recently (since 2015), who headed the Security Council of Belarus. And here very serious questions begin ... They cannot arise even if only because of the extremely difficult processes that are taking place between Minsk and Moscow now, which, alas, show a tendency towards an exacerbation. It is completely possible that the Organization may turn into the next platform for “clarifying relations” between the two countries, which, of course, will in no way contribute to the effectiveness of its work.

These fears are all the more relevant because, according to many analysts, it is Zas who is one of the most influential and active representatives of Minsk, striving to intensify relations between the country and the West. In any case, his participation in last year’s talks held in Warsaw with the secretaries of the Security Councils of Poland and Ukraine, as well as the then National Security Advisor to the US President John Bolton, give certain reasons to take such assumptions seriously. However, even without problems with Belarus, “weak links” and “bottlenecks” in the structure and activities of the CSTO are more than enough. About 20-30 years ago, when the Organization was just beginning its formation, its potential and structure were seen in a slightly different way. It was a question of joint air defense systems, communications and control, which were supposed to link the armies of its member countries, the significant integration of their military-industrial complexes ...

Unfortunately, all this remained at the level of dreams and plans. Over the past years, Georgia, Azerbaijan and Uzbekistan have left the Organization. Unfortunately, it did not, in fact, turn into a true military community. In 2015, Russia's military assistance to Syria in the CSTO found real support only from one member - Armenia, which is extremely dependent on Moscow in the supply of modern weapons.

Yes, the CSTO has achieved undeniable successes in the common fight against terrorism, drug trafficking, and illegal migration. But will she face the much larger challenges of today? On the other hand, the complete disintegration of this alliance, which has repeatedly been predicted by pessimists for many years, has also not occurred.

Most likely, the Collective Security Treaty Organization will soon have to go through trials that will either destroy it or finally give the CSTO an impetus for transformation into a cohesive and efficient military-political bloc.

We are in Yandex Zen
Where should Tajikistan put its independence? ..
Why Uzbeks and Tajiks do not take the world
75 comments
Information
Dear reader, to leave comments on the publication, you must to register.