Peremoga has arrived: Russia has lost the status of the main economic partner of Ukraine 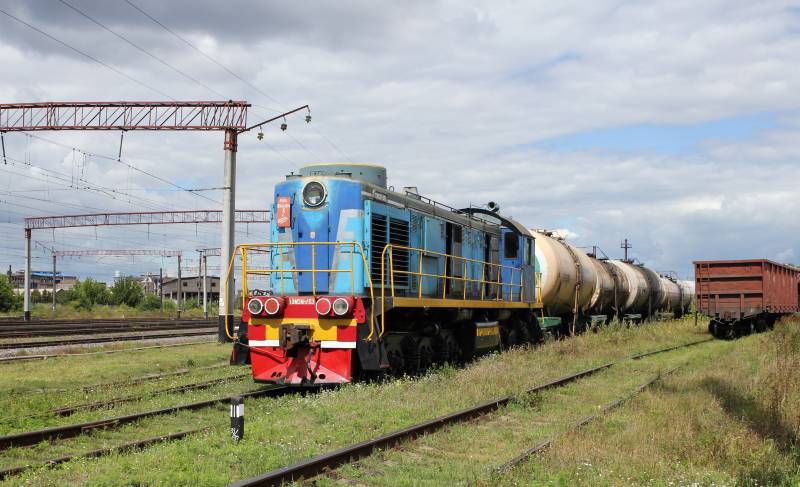 2019 brought a new reason for pride to the Ukrainian "patriots" -rusophobes. Finally, Moscow, which they hated, ceased to be the main trading partner of Kiev, losing this “honorable" championship to Beijing. Why it happened and what the “Chinese breakthrough” in foreign trade "unbroken" really means is a topic for a separate discussion.

Economic relations between Ukraine and Russia began to decline after the "Maidan" coup of 2014 and the subsequent return of Crimea to our country. On September 10, the newly elected president Petro Poroshenko signed the first law “On Sanctions” - and off and on. With the help of trade restrictions and barriers, Kiev was going to "defend national security, independence, sovereignty" and something else there. The list is pretty long. In the end, it all came down to numerous bans on the import of certain Russian goods and cooperation with our country in various fields, primarily in the military-technical field. Moscow, we must give it its due, did not remain in debt and began to consistently pursue a policy of abandoning everything that was of Ukrainian origin.

The situation was especially aggravated since 2016, when Russia canceled the effect of the agreement on a free trade zone with “non-fallow”, which rushed into the economic “embrace” of the European Union, and, in addition, extended the food embargo to it, which was a response to sanctions imposed against our country EU In the future, Kiev continued to actively conduct a "trade war", prohibiting the import of either mineral fertilizers, cars, or even bottles with cans. There were conflicts within the WTO, which Ukraine lost, so to speak, with a bang. The result was not long in coming: if in 2013 trade with Russia accounted for about 24% of Ukrainian exports and more than 30% of imports, then already in 2014 these figures fell to 18% and 23%, respectively. By 2018, Kiev managed to reduce "trade with the enemy" to 7,72% of exports and 14,5% of imports. Moreover, it is true that Russia was, and remains, the trading partner of Ukraine No. 1.

Dreams of a “European market open to Ukrainian goods”, quite expectedly, turned out to be pure manila. And what could a country with completely ruined industry offer spoiled Europe? Unless raw materials and agricultural products. However, this also turned out to be far from simple - having hit the world of fierce competition, the highest requirements for quality and strict quotas for deliveries, Ukrainian exporters were deeply depressed. And products imported from the West because of their high cost turned out to be "too tough" for most local consumers who are rapidly impoverished and are losing their purchasing power. I had to give a damn about “gnidnost” and again turn to the East, trying to restore the connections broken up by foolishness. In 2017-2018, imports to the "non-winter" from Russia began to grow again. And besides, in a number of positions, such as the purchase of fuel for nuclear power plants, Kiev simply has nowhere to go.

All this to the extreme irritated the "patriotic public" of Ukraine, and, in particular, those oligarchs there who fell under Russian sanctions or were excluded from economic cooperation with our country for any other reasons. But last year, everything changed: in the import of goods into the winter season, China came first. And in the structure of the export there, Russia turned out to be third at all, losing all the same to Celestial Empire and Poland. Finally, “peermog”! In fact, Kiev has no reason to rejoice. For the changes that have occurred, they should exclusively thank the trade war between Washington and Beijing, as a result of which the Chinese comrades, abandoning American agricultural products, began to buy it almost all over the world. It was the enhanced export of grain at dumping prices that became the basis for Ukraine's “breakthrough” in the Chinese direction.

Otherwise, there is absolutely no reason to be proud and rejoice. The negative balance in the trade balance of Kiev amounted to $ 8 billion in October 2019. Abroad agree to buy Ukrainian iron ore, sunflower oil and seeds for its manufacture. The rest is a continuous decline, even in the traditional export of ferrous metal and products from it. Regarding the agricultural "successes" of the once-imagined "great agrarian power" of Ukraine, it is still worse. Last year, she imported in bulk quantities not bananas and avocados, but trivial onions, tomatoes, and even potatoes. The Ukrainian land sown exclusively for export crops is depleted and already now cannot feed its own inhabitants.

But today, the "patriots" rejoice: since 2014, the share of Russian goods in the Ukrainian market has decreased by three times, and Ukrainian exports to Russia have decreased by 3,6 times! Well, well, to be a raw materials appendage not even of Europe, but of China and the market for the lowest-quality consumer goods manufactured there, is, of course, better ...

We are in Yandex Zen
Situational analysis of the death of the MH17 flight (Malaysian Boeing 777), made on the basis of engineering analysis from 15.08.2014
Results of the week. “In our cooperative, the board is always agreed”
92 comments
Information
Dear reader, to leave comments on the publication, you must to register.