The sudden relocation of a rare "air radar" to the Khmeimim air base. Time-tested help 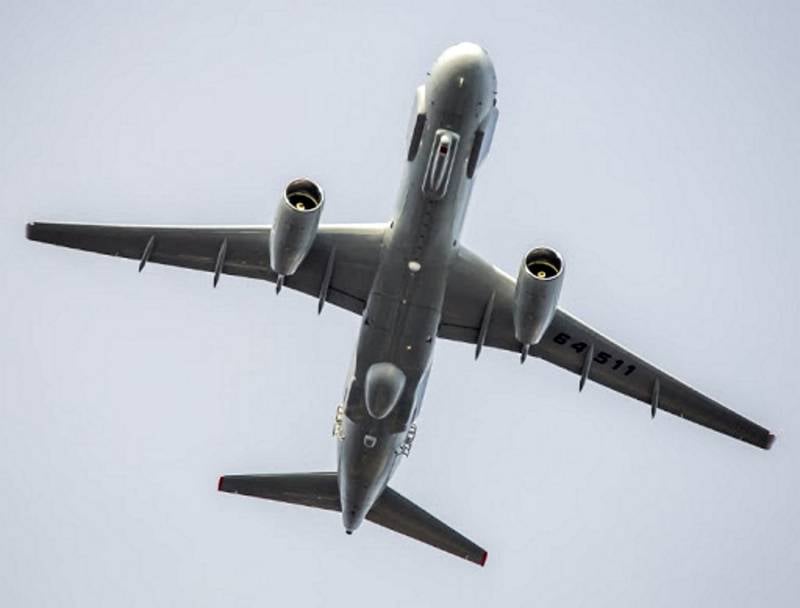 Undoubtedly, the information on the recent operational redeployment of one of the two strategic optical-electronic, radar and radio reconnaissance aircraft Tu-214R (board RF-64514) from the Chkalovsky joint-air militarized airfield near Moscow to the Russian aerospace base in the Khmeimim SAR can be extremely useful serious food for thought to military experts and competent observers who monitor and forecast scenarios of the development of the operational-tactical situation in the "big Idlib", as well as in the catch bank of the Euphrates.


And this is not surprising, because the first reconnaissance flights of this aircraft (a more perfect analogue of the American strategic radar reconnaissance aircraft E-8C "J-STARS") in the vicinity of the Donbass and over the Syrian military theaters coincided with well-known operational-tactical events taking place in the areas mentioned above "Hot spots" in December 2015 - February 2016.

Aircraft of integrated radar, radio engineering and optoelectronic reconnaissance Tu-214R is the main informational aid on the theater

In particular, in the first case, the Tu-214R reconnaissance flight along the Russian-Ukrainian border, as well as the state border between Russia and LDN, recorded on the Flightradar24 online monitoring portal for regional and global air traffic on December 21, 2015, was carried out on the eve of the announcement of the Trilateral Contact a group to resolve the situation in the Donbass of the next ceasefire, which entered into force on December 23. Considering the fact that the RA-64514 airborne route ran only 30–40 km from the air borders of the Lugansk and Donetsk people's republics, as well as the “non-blocking” one, it is not difficult to conclude that the main purpose of this flight was to test the multi-band radar complex RTOs -411 and the integrated multispectral (IR / TV / low-level channels) optical-electronic complex "Fraction" with simultaneous monitoring of the contact line for the transfer of additional artillery units with axle boxes to the APU artillery howitzers and self-propelled guns with guns of prohibited calibers.

Moreover, the operators of the MRK-411 and Fraction complexes were able to observe the regrouping of motorized rifle units and armored “fists” as part of the 93rd and 72nd mechanized brigades, as well as the 36th separate naval infantry brigade and the Azov regiment, operating in the Donetsk and Novoazovsk operational areas, which ultimately made it possible to assess the degree of threat to the fortified areas of the 1st Slavic brigade, the 9th Mariupol-Khingan separate motorized rifle regiment and other units of the 1st army corps of the DPR Armed Forces, covering the Telm An Isthmus of the Isthmus ”and other strategically important sectors with a small operational depth of the rear zones, etc.

The need to transfer the Tu-214R to the Khmeimim airbase on February 15, 2016 was due to the most difficult operational-tactical situation that developed simultaneously in several parts of the Syrian theater of military operations. At this time, units of the 4th Mechanized Division of the Syrian Arab Army, the National Defense Forces, the elite volunteer brigade Al-Quds, the Golan Regiment, the Desert Hawks brigade, and also the Kurdish Athenian units regrouping for the purpose of offensive throws at El “Babskiy bridgehead”, Azaz, Et-Tabka airbase, “de-escalation triangle” “Dara-Es-Suweida-Kuneitra” and on Palmyra, needed to continuously provide accurate and reliable information about the tactical situation (including not only enemy strongholds, but also mobile armored vehicles, as well as underground infrastructure) in several operational directions at once. To cope with a similar range of tasks tasks could only Tu-214R.

The multi-band radar / radio complex MPK-411, located on its board, represented by multi-element active phased antenna arrays, is capable of operating in synthesized aperture (SAR), reverse synthesized aperture (ISAR) modes, as well as GMTI / T (“Ground Moving Target / Track” ) in almost any meteorological conditions, perfectly complementing the Fraction optical-electronic complex. The first two modes, differing in centimeter X-range and resolution of about 1-2 m, provide not only classification, but also identification of small surface (ground / surface) objects due to the formation of a filigree accurate "radar image" of the scanned surface area with the construction of a detailed layout of the detected goals, including EPR and the silhouette of each object. GMTI mode provides direction finding and tracking of single and group mobile ground targets in both normal and adverse weather conditions (fog, rain, sandstorm, etc.) at a distance of 150-200 km.

The unique distinguishing feature of the MRK-411 radar / radio complex (unlike the AN / APY-3 radar of the E-8C “J-STARS” aircraft) is its ability to operate at lower frequencies, providing the implementation of subsurface radar mode, which allows detecting the enemy’s underground infrastructure on a few tens of kilometers away. It is logical to assume that the next redeployment of the RF-64514 board to the Khmeimim airbase will be a fundamental aid for the Syrian army to the final stage of the liberation of the long-suffering "Idlib adder."

We are in Yandex Zen
New challenges to the strategy of the Russian Aerospace Forces in Syria are “outlined” and require a “game” of advance. What “mechanism” of NATO does Turkey coax in the north of Syria and Iraq?
Situational analysis of the death of the MH17 flight (Malaysian Boeing 777), made on the basis of engineering analysis from 15.08.2014
35 comments
Information
Dear reader, to leave comments on the publication, you must to register.