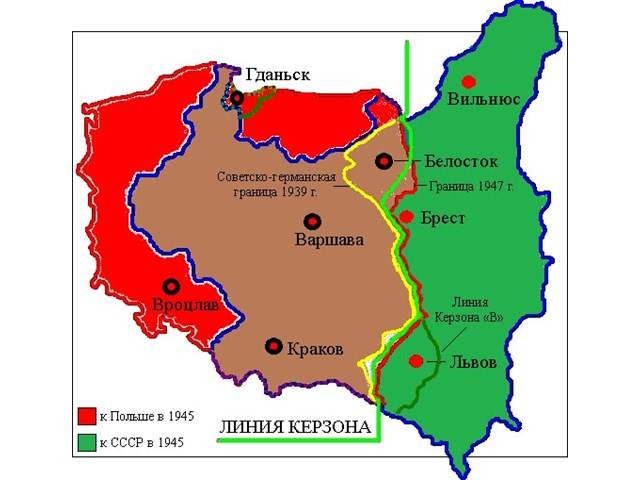 And what did you do in Yalta in the 45th?

Poland historically has fallen between Russia and Germany, and nothing new today, in fact, is happening. However, Germany, remaining the leader of the European Union, which is now very difficult to maintain unity, may well seize the opportunity to “meet” claims against Poland.

Indeed, the deliberate Polish foreign policy activity is by no means limited to excursions to history. It, among other things, actually casts doubt on the legitimacy of all Polish borders, including the post-war Polish-German border defined at the insistence of the USSR during the Yalta Allied Conference in February 1945. 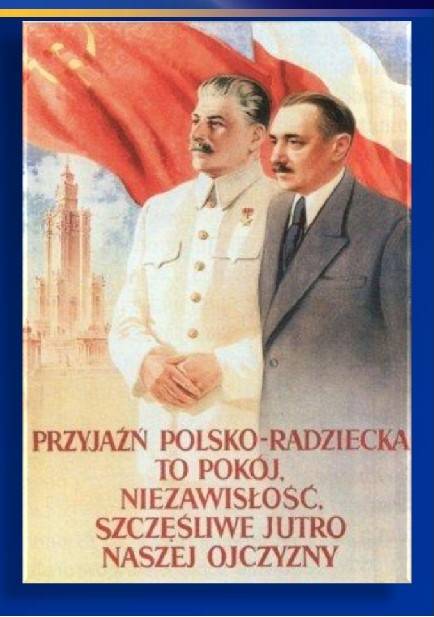 East of it, as you know, there are really Polish territories, which became the reason that Poland was pretty much pushed to the west. And by no means in the East’s favor - the transfer to the USSR of territories with Ukrainian and Belarusian by more than three quarters of the population did not bother anyone, not even Churchill, who was passionately committed to the notorious “Curzon line”“Find the answer to the British ultimatum!”).

In Bonn, and then in Berlin, it was very rarely remembered that in the German Basic Law of 1949, which is still valid today, it is prescribed that the western and northeastern (ex-Prussian) regions of post-war Poland be considered German. But now they can and remember. However, about this - a little later ...

It is characteristic in this connection that the leaders of Eastern European countries, including the GDR, have repeatedly emphasized the geopolitical significance of the Yalta decisions. Firstly, they permanently saved Warsaw from "nostalgia" according to old-time plans for Poland from sea to sea - from the Baltic to the Black.

However, for the Poles themselves, the second was much more important - the return of the originally Polish territories captured even by Prussia long before the creation of a unified German empire under its auspices. Either traditional Russian generosity, or a deceptive faith in a new ally - Poland, led the Soviet leadership to a strategic error. It did not support the demand of its East European allies to demand from Germany the abolition of revenge-seeking articles in its Basic Law.

The leaders of the countries of people's democracy rightly considered it necessary to more clearly legally consolidate the Yalta decisions and specifically the post-war borders in the "triangle" of the USSR - Poland - Germany.

For example, the Secretary General of the Romanian Communist Party and the President of Romania, Gheorghe Gheorghiu-Dej, in talks with the then head of the German Democratic Republic, Otto Grotewol in January 1956, said:

“Churchill and Roosevelt agreed with the Yalta decisions taken at the insistence of Stalin, since the Soviet Army, and not Western troops, already determined the“ climate ”in Eastern Europe. Particularly lucky was Poland, which received long-standing Polish lands. But at the same time, those territories, Polish only partly were cut off from it, thanks to which it has long since laid claim to "Poland from sea to sea." They take (the head of Poland in the late 40s - mid 50s. - Approx. Aut.) Considers such decisions to be correct. "

In response, Otto Grotewol proposed fixing the significance of those decisions within the framework of a single East European document:

“Yalta is important because geographically and politically, East Germany is spared from Prussian militarism, which has always plunged Germany into aggressive wars. It would be right if we could get the FRG to officially recognize the new borders in Eastern Europe. But in its Basic Law of 1949, claims to the borders of 1937 are indicated, especially to Prussia.

But in negotiations with Adenauer (Chancellor of Germany in 1949-66 - Approx. Aut.) In Moscow in 1955, Khrushchev., Bulganin and Molotov did not touch on this issue at all. In connection with the new course of the USSR, this issue, apparently, will never be discussed with Germany, although we suggested that Moscow discuss it with Adenauer. " 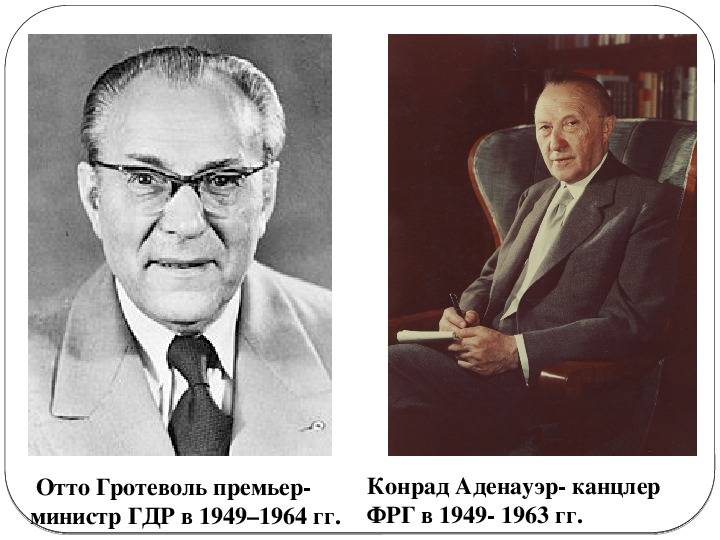 Where does the claim come from?

Indeed, the post-Stalinist leadership of the USSR never discussed this issue with the FRG, forcing all the pro-Soviet countries of Eastern Europe to hush it up. However, the PRC and Albania officially condemned such a conjuncture course of Moscow in relation to Bonn; similar was the position of Bucharest, East Berlin, Pyongyang (although "non-public", in contrast to Beijing and Tirana).

But these disagreements did not affect Moscow in any way, because already in 1955 they agreed with Adenauer, even if preliminary, on long-term soft loans for the USSR. Finally, from the second half of the 60s, Germany financed state and commercial loans with the creation in the 70s and early 80s of a network of export gas pipelines from the USSR to Germany and other EU countries (mainly through Germany). Why "risk" such projects and even more so obtaining loans with preferential terms?

The conversation between the Czechoslovak leader Clement and Boleslav Bierut in Warsaw on September 19, 1952 is also noteworthy:

"" "They take: We must clearly confirm in the agreements of our countries with the German Democratic Republic and the USSR that the Soviet-Polish treaty of 1941 is invalid. This is especially important in connection with the new borders. I told Stalin several times about this - he agreed, but considers it secondary, as the countries of people's democracy and the USSR will have no questions on the post-war borders. ”

“I think the same, but it is probably better to confirm all this with some document at the corresponding conference of the countries of people's democracy and the USSR. Because this issue concerns, in addition to ours, and other countries of popular democracy.
Take: I agree. We will offer it. ”

But such a forum did not take place. In Moscow, these issues were considered secondary in relations with the new allies, not expecting, of course, the collapse of the USSR, etc. events. Meanwhile, K. Gottwald died suddenly on March 14, 1953, shortly after Stalin's funeral.

But B. Take suddenly died in Moscow in early March 1956. His relatives recalled how the Polish politician was stunned by the "sudden and slanderous" anti-Stalinist report of Khrushchev at the XNUMXth CPSU Congress on the eve of his death.

As for the Soviet-Polish treaty of July 30, 1941 (London) "On the restoration of diplomatic relations and the creation of the Polish army on the territory of the USSR", then its article 1 announces:

"The Government of the USSR recognizes the Soviet-German treaties of 1939 regarding territorial changes in Poland as void." 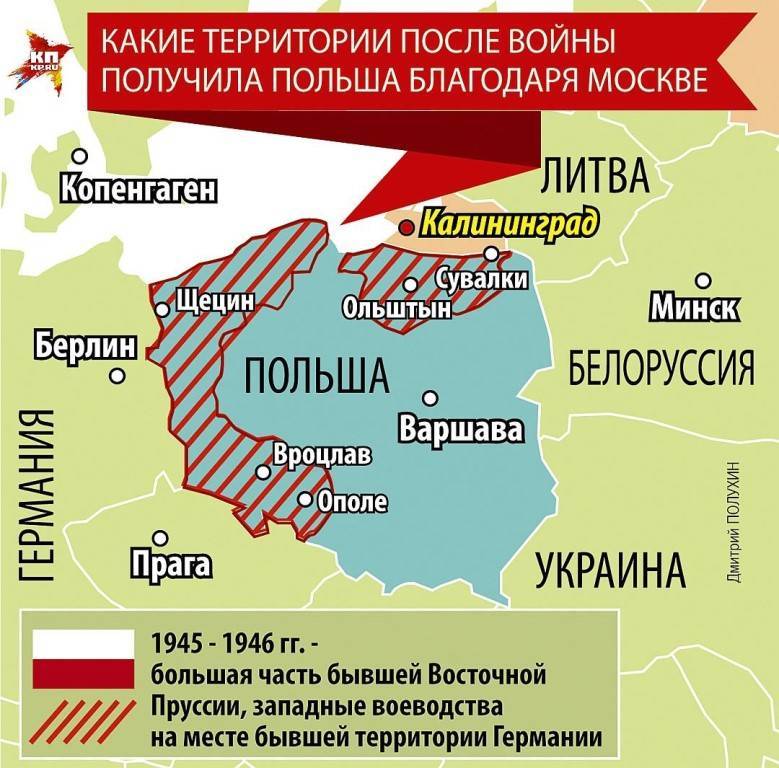 This means that the inclusion of Polish (as of September 1, 1939) Vilnius, Western Ukraine and Western Belarus into the USSR was actually recognized as illegitimate.

In the first post-war years, treaties and clarifying Soviet-Polish documents on the new East Polish border were signed. However, there was no indication or confirmation in them that the aforementioned article of the 1941 treaty had lost its legal force. 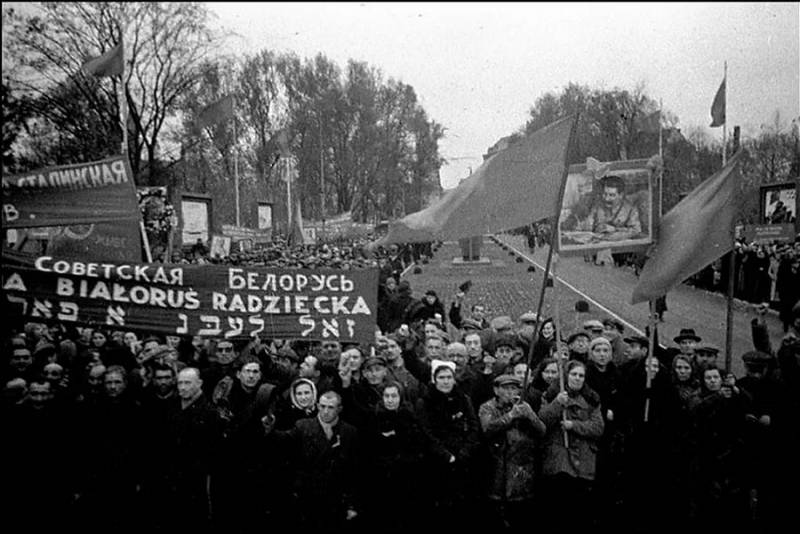 In Western Belarus, the greetings of the Red Army in 1939 were written in three languages
Is this where Warsaw’s current political speculations about the USSR and the Russian Federation come from?

But Russia, obviously, should seriously take care that in solving border issues there should be more active those whom they, in modern conditions, affect not historically, but quite specifically: Belarus and Ukraine.

We are in Yandex Zen
Situational analysis of the death of the MH17 flight (Malaysian Boeing 777), made on the basis of engineering analysis from 15.08.2014
Results of the week. “In our cooperative, the board is always agreed”
35 comments
Information
Dear reader, to leave comments on the publication, you must to register.