“Finish with a file”: some details of problems with the BTR-4E 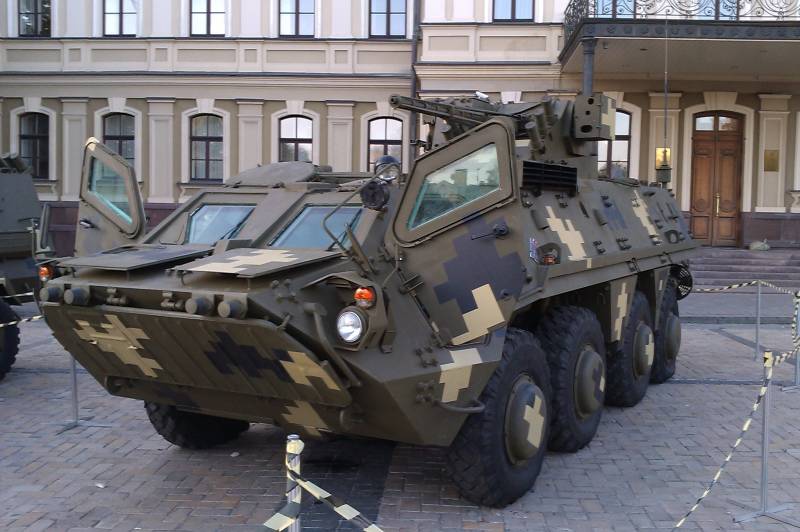 This week has been marked by high-profile scandals that erupted in the defense department of the “uncountable”. They are associated with one of the most painful moments for the army there - the supply of military equipment and components. Everyone knows the expression: “to whom the war is, and to whom the mother is native” and asks to be elected as the official motto for the large and extremely gluttonous caste of the Ukrainian military suppliers and logisticians.


The first, extremely unpleasant situation is connected with an attempt by the management of the Ukroboronprom concern to reanimate the contract for supply of the APU 2016 BTR-45E combat vehicles concluded in 4 pursuant to the relevant resolution of the Ukrainian Cabinet of Ministers. During the time that has elapsed since that moment, as part of the implementation of this agreement, not a single piece of equipment was received by the troops. All the time, something did not add up, while the allied players involved in the production process nodded amicably at one another according to the good old tradition: they say, "he has the wrong system of grenades." Evil tongues said that the reason that made the fulfillment of government directives impossible a priori was the banal absence in Ukraine of grade 71 steel, from which armored personnel carriers were to be made. True, an attempt was made to replace it with a kind of “steel of foreign manufacture”, but in the end it turned out to be hell with a buckle on its side. Blinded from a "substitute" of the body were not suitable.

It got to the point that last year the newly elected president had to intervene in the process and the case, it seems, moved off the ground. And finally (the five-year period has not passed!) Kharkov Design Bureau of Engineering named after Morozova, where fighting vehicles, in fact, should be assembled, received the long-awaited first three corps for the manufacture of a new batch of BTR-4E. What was the disappointment of his employees when they became convinced that literally on all cases the traces of factory defects are visible not just with the naked eye, but, as they say, a mile away! Poor welding, clumsy fastening of parts ... In a word, "until ready to finish with a file." However, this would have been half the trouble if numerous cracks had not been immediately discovered on brand-new buildings.

It is worth noting that such a defect is the "trademark" of the manufacturer of the buildings - Lozovsky Forge-Mechanical Plant. According to available data, 30 BTR-4 cracks delivered to customers in 2011-2012 had cracks. In the period from 2014 to 2018, out of 127 BTR-4Es in operation, 53 had problems with the hulls, that is, almost half. As a rule, the main drawback was just cracks in the armor, often multiple. All this, however, did not in the least prevent or prevent LKMZ from receiving generous defense orders. Perhaps this scandal could have been hushed up somehow, but it didn’t work out - the Defense Express portal “unrolled” it all over Ukraine, which published, in addition, photographs of “armored corps” except for scrap metal. Ultimately, the management of Ukroboronprom gave exactly 24 hours to both enterprises to “clarify the relationship” and verify the reliability of the “signal”. Also, the commission of the Ministry of Defense of the Nezalezhnoy threatens to conduct a total quality check of the products of the Lozovsky plant. The new armored personnel carriers in the troops will wait again, and it is not known how many ...

The second, even more egregious, incident is again related to the supply of components for military equipment. Only this time - for the Air Force. During 2017-2019, a certain businessman from Chernihiv concluded two agreements with the Ukrainian defense department, according to which he was obliged to supply “devices for helicopter protection systems” in an amount exceeding 100 million hryvnias. It is not known for certain what he installed there and how these “devices” can contribute to the survivability of rotorcraft, but the Security Service of Ukraine, today conducting numerous searches at the rear, claims that the cost of the equipment was several times overstated. According to them, the senior officials of the Ministry of Defense, including one of the deputy ministers, participated in the criminal scheme. The most remarkable thing is that 32 million hryvnias rogues in uniform and without them have already managed to receive, cash and appropriate.

We are in Yandex Zen
Situational analysis of the death of the MH17 flight (Malaysian Boeing 777), made on the basis of engineering analysis from 15.08.2014
Results of the week. "God forbid to see Russian revolt, senseless and merciless!"
31 comment
Information
Dear reader, to leave comments on the publication, you must to register.