Putin transit: revolution from above 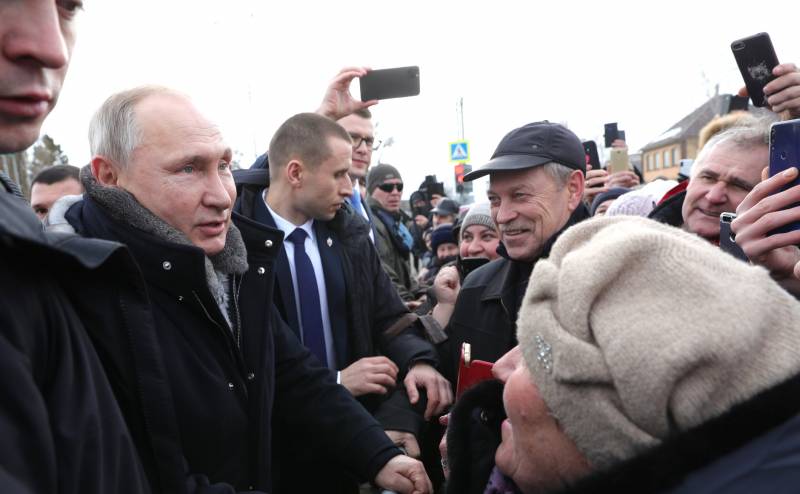 Some observers call the January 15 reform a “revolution from above." In some ways this metaphor is true: the reforms announced by President Putin significantly change the configuration of the supreme power, redistribute power between the institutions of the president, the State Duma, the government and the State Council. This is a real separation of powers, which the democrats have always talked about, but our "democrats" are terribly unhappy with this, because they are also pro-Western puppets.

Vladimir Putin will not be re-elected in 2024, resigns as president, but will continue to lead the “Putin elite” under the new president of Russia, and the latter infuriates our pro-Western party and other “all-proverbs”: their spells about the collapse of Russia have disappeared again. Putin leaves and remains at the same time!

To understand how great Putin’s Russia’s stability is, just look at a neighboring pro-European country, with which the population has been scampering for jobs throughout Europe for several years, but that doesn’t affect its stability - feel what a safety margin Russia has!

Putin's successor, so to speak, will be his elite power group, distributed between several centers, which deprives our liberal column of hope for the emergence of a “new Gorbachev”, hence the universal howl of Pavlovsky experts, public figures of Yavlinsky, bulk and bull. They shout "everything is lost," because they really have everything gone, but what else remains for them? Hopes to surrender Russia somehow under the external control of the West after Ukraine again disappeared! But you need to work out old grants and somehow earn new ones for your “democratic" needs.

President Putin’s unexpected announcement of constitutional reform is perceived by many as a force majeure. Our “well-wishers” are promoting this topic in the Western media, and some of our experts succumb to their modest charm.

At that time, when there was a very simple explanation: now it’s a very favorable moment for Russia — the foreign policy pressure from our main “partner” and the specialist in “democracy” and “regime change”, the USA, has significantly weakened. In America, there’s a “big sluggishness,” a struggle between President Trump and the Democratic Party against the backdrop of the next presidential election.

Simply put, Washington is not up to us today, the hotbed of gay democracy is busy fighting Trump. In this case, excesses are possible, and then we will not have time for constitutional reforms. It can be said that with this reform Russia is preparing for the US elections, for any development and outcome.

All of us are not eternal, and Vladimir Putin, too. The January 15 reforms are designed for a very promising future, after Putin. There can be no guarantees, not even constitutional ones, and President Putin is doing what he can to continue his political course after himself.

Political upheavals in the United States will inevitably affect their satellites, especially such weak ones as today's Ukraine, which has also managed to get involved in intra-American squabbles. In general, escalation of tension in Ukraine is possible. Zelensky something too often asks for meetings with Putin, only for the exchange of “held persons”. Yulia Tymoshenko has acted as a prophet and predicts the collapse of Ukraine.

Zelensky continues to make conflicting statements, both by yours and ours, which speaks of the instability of his position. He still cannot "deal" with Petro Poroshenko and fulfill his main election promise - to put Petro on the "well-deserved bunks". But the matter is not only in these “bunks” per se: Poroshenko poses a real threat to President Ze, and until he eliminates it, he himself will be in constant danger.

We are in Yandex Zen
A great interview with Sergey Lavrov: about Ukraine, Obama and Iran
What you didn't want to know about England
159 comments
Information
Dear reader, to leave comments on the publication, you must to register.