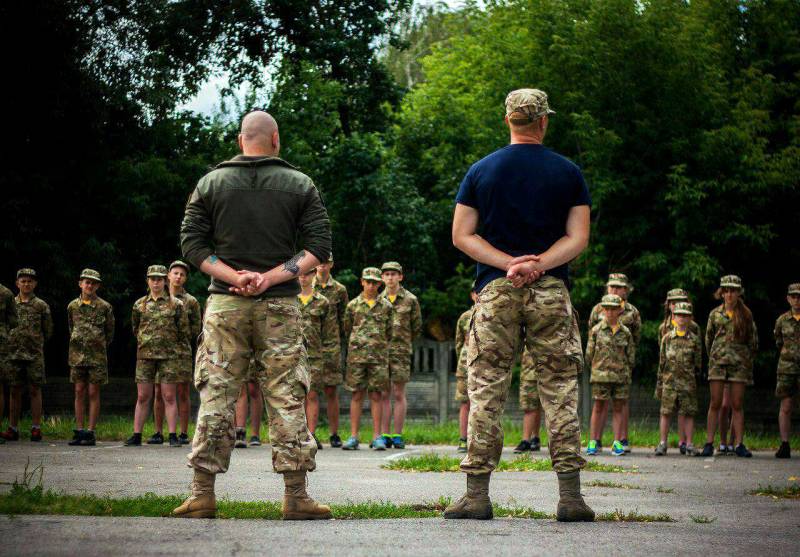 Trying to convince the world that there is no outburst of neo-Nazism in it at all, Ukraine continues to fully develop and support at the state level movements aimed at injecting the ideology of "national patriotism" into young generations of Ukrainians.


In a impoverished country, in fact, enormous sums from the half-empty state budget are allocated to organizations that are actually successors of the Nazi Hitler Youth. For the third year already, a large-scale competition of "projects of national-patriotic education" has been held there, the laureates of which become recipients of huge (by Ukrainian standards) grants from the treasury. Even a short list of some of those who are honored with this honor gives a complete idea of ​​what official Kiev is trying to invest in today.

So, according to the results of such a competition, which were announced at the beginning of this year, more than 2 million hryvnias will go to the Lviv “scout organization Plast”. The fact that this wonderful company is and what kind of “ideals” it seeks to instill in children and adolescents is evidenced by the fact that Bandera and Shukhevych were originally from it. As well as many other "prominent figures" of the infamous OUN-UPA (* extremist organization banned in the Russian Federation). As a matter of fact, for the state budget, the leaders of Plast intend to organize the kids not to fix the fences for the grandmothers in the dying Ukrainian villages, but to drive them into the militarized national-patriotic tent camps. There, in addition to the “formation of patriotic consciousness”, scouts, of course, will be trained in appropriate combat skills. This is not some Timurovites who have long been loyal to the "unbroken" anathema to you! Before us is a real conveyor for training the Neo-Bandera.

If someone is overwhelmed by doubts as to who the Bandera’s adherents will teach children and teenagers to “fight” with, I’ll clarify: the organization of the Youth Nationalist Congress intends to organize “summer camps” this year for the 350 million hryvnia received from the state. In the process of such, their young participants will live in the forest, while "recreating the events of the epic battle of the UPA against the NKVD."

Yes, in fact, the names of the winners of the competition and the events planned by them speak for themselves. "All-Ukrainian Association of Military Patriotic Organizations" (VOVPO) with the project "Militant Spirit", the participants of which will undergo physical and psychological pre-conscription training "according to NATO standards." The Wings Youth Foundation, which plans to hold Rebel Nights. The name itself makes you think.

Not forgotten and the "cultural component" of Bandera ideology. Almost half a million is allocated to the “Banderstat” festival of Ukrainian spirit, traditionally held with the personal participation of UPA veterans * and their lavish honoring. There are no comments. Another 300 thousand - on the “militaryhistorical"Sabbath called" Under the Cover of Trident "and conducted by the public organization" Valkyrie ". Everything else is in exactly the same spirit: a typical set of Ukrainian national patriot. So far, all the “movements” listed above are concentrated, for the most part, in Western Ukraine. However, since 2014, this putrid infection has spread throughout the country, and its spread will accelerate at an alarming rate.

And could it be otherwise if the need to create a state agency for patriotic education with a nationalist raid is seriously discussed today at the level of the Verkhovna Rada Committee on Youth and Sports? In the meantime, the deputies included in it “on the spot” are sending out extensive and detailed recommendations on strengthening relevant work and the widest possible coverage of all children and adolescents.

Ukraine, of course, is not attracted to a copy of the Third Reich, which it so diligently imitates in many ways. In terms of its level, this is a maximum miserable parody of it. Nevertheless, the figures of human blood that create this parody can shed a lot of things - unless, of course, they are stopped in time.

Author:
Alexander Kharaluzhny
Photos used:
photo from the site of the camp "Azovets"

We are in Yandex Zen
Situational analysis of the death of the MH17 flight (Malaysian Boeing 777), made on the basis of engineering analysis from 15.08.2014
Results of the week. “In our cooperative, the board is always agreed”
22 comments
Information
Dear reader, to leave comments on the publication, you must to register.