Battle of Legnica: Horde cavalry against the knights of Europe 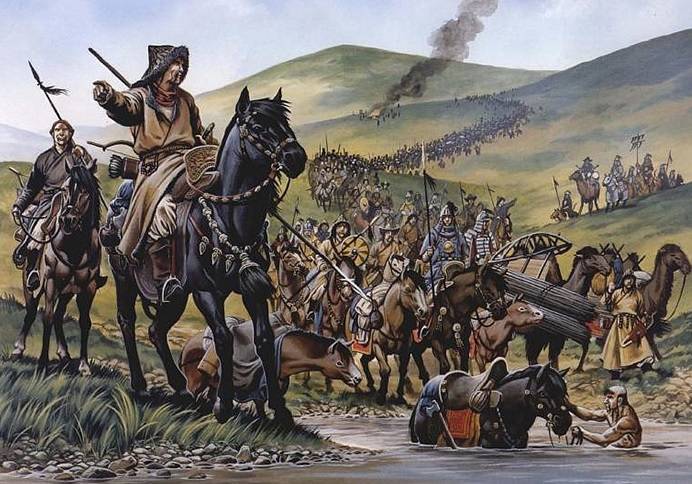 Mongols on a camping trip

For some time, Europe was not particularly interested in the Mongols. But, as soon as life made them meet, how assessments and degree of attention immediately changed. For example, Pope Gregory IX called the Mongols nothing more than messengers of hell, a kind of unstoppable locust from biblical texts.

The Europeans had reasons to use such epithets: the Mongols posed a serious danger. Not that they possessed any advanced weapons, although they skillfully borrowed military-technical achievements from the conquered peoples. They didn’t even collect grand armies of hundreds of thousands of people - they would not be pulled by any logistics of the Middle Ages. No, the strength of the Mongols was different, and it was not a simple answer to a difficult question, but a whole combination of factors.

Firstly, the Mongols were distinguished by military discipline unprecedented for the feudal Middle Ages. The vertical of power was much stronger than that of settled peoples. Yes, the commander’s actions in the context of “listen / not listen” were influenced not only by the “ranking card”, but also by his personal authority. But far from to the extent that the noble feudal lords, the most powerful of whom rather considered the commander "first among equals" than the king and lord. The result - the Europeans could not count on the level of command and control that the nomads from the east had.

The second factor is successful tactics. The Mongols relied on light horse archers, which, when used correctly, could become a very effective antidote to the heavy cavalry of the knight type. Keep your distance and bombard the enemy with arrows until he is exhausted - and win.

No, of course, this was not an easy walk and required a fair amount of tactical skill. But in most cases it worked for itself. And, more importantly, it met the capabilities of the Mongols.

After all, a knight was usually fed by at least dozens of peasants - it was thanks to their income that he bought extremely expensive equipment and an even more expensive war horse that could carry all this. In the case of the Mongols, the mobilization base was already ready - the nomad was already able to shoot archery very well. Yes, and a serious one, capable of carrying a knight in chain mail, a horse, he did not need - unpretentious, but unpretentious Mongolian horses came up.

Therefore, the Mongols could fantastically easily (for their victims - sedentary feudal lords) to collect very representative contingents, and appear with them wherever there is something to win.

Another advantage of the Mongols against Europe (which, of course, included Russia) was the grand fragmentation of the latter. In this feudal reality, there was no way to establish a stable vertical of power - a knight, for example, could not come to war at all at the call of the overlord, if he considered it necessary. And he wouldn’t have anything for it.

In politics, Europeans also had a mess. It was impossible to count on the unification of the region against dangerous enemies. There were, of course, powerful people who, in theory, could put everyone together and send them to fight with the Mongols — the emperor of the Holy Roman Empire and the Pope. It was only in the 1220s - 1240s that these two people hated each other, as there are few others. And regularly fought among themselves.

In addition, many territories, despite all the attempts of the rulers, were divided between sons. And nothing could save from such an outcome - even if you were Charlemagne himself. If you die, a generation or two will pass, and everything collected will crumble again. Medieval Poland - a country that took the blow of nomads along with Hungary - was an excellent example of such fragmentation. There was no need to count on serious unity.

Another advantage of the Mongols was that the Europeans were very weak - which is understandable, given all the internal strife - were interested in the Mongols themselves. No, of course, there were some contacts and intelligence missions, but their results were drowning in a heap of intra-European problems and conflicts.

The Mongols themselves approached the matter exactly the opposite - they carefully collected information about the lands to which they were to head. Nobody was going to go nowhere in the hope of "maybe".

Enemy at the doorstep

The Mongol invasion west of Russia was more like reconnaissance in battle than a serious conquest of everything in a row - to see what happens. Only Hungary was planning to occupy as a springboard for future actions. But for the people and rulers of neighboring Poland, which became the arena for auxiliary Mongolian operations, everything looked as serious as possible.

The task of Tumen, sent to Poland, was to defeat the troops of the local feudal lords, which they would definitely try to set against the invaders. Just so that they do not become enemy reinforcements in the main direction of the strike - in Hungary.

This was by no means an empty whim — despite the prevailing fragmentation and feudalism, powerful rulers could well find and attract at least temporary allies. So Henry Pious - the owner of one of the most powerful principalities of Poland, Silesia - was not left without friends. Their role was played by the Czech king Wenceslas, the limited contingents of the Teutonic Order, the Templars, and groups of mercenaries and volunteers. The latter, of course, did not consist of anyone who wanted, but of a professional military.

Henry gathered all these forces. And while this was happening, the Mongols who came from the territories of Russia in January 1241 hard beat everyone who tried to resist. In March, they robbed and burned Krakow - and continued to destroy everything that reached out to their hands. This behavior made sense - the nomads urged local feudal lords to quickly enter the field to defeat them, and with a sense of accomplishment go to Hungary to strengthen the main forces.


Henry understood that the enemy was extremely serious. It took time for the Allies to approach, and he pulled it as best he could. For example, he tried to divert the advancing tumene to the city of Wroclaw, but the enemy realized that the main thing, at the moment, was the army of the Silesian prince, and not the city, and bypassed it. 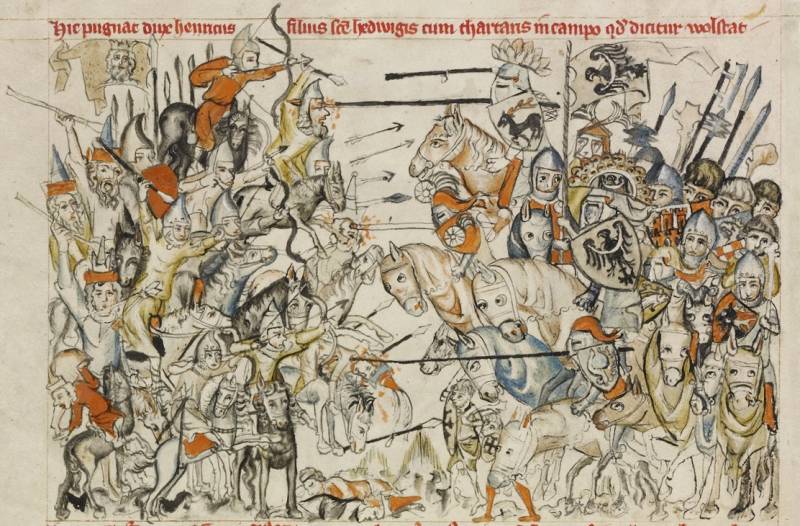 Battle of Legnica in a XNUMXth century miniature
By April 9, it was no longer possible to delay time - Henry with his 6th (although much larger numbers are called) army was sitting in his castle. There was no particular place to retreat, and the impressive size of the army did not allow the siege to be accepted - it would still be impossible to feed such a mob. And then the prince decided to give a field battle.

He had not very many chances - the army of the main ally, the Czech king, had not yet come. And those who remained were, in many respects, a “patchwork” army of many contingents - including foreign ones. But it was better to die with music.

Henry divided the army into 5 parts. On the one hand, this reduced the strength of the first strike, and on the other, it left reserves - in case the nomads performed their favorite trick with a false retreat.

The Polish prince began by sending two units to attack. The result was predictable - the initial success of the heavy cavalry, but then archery, the environment, heavy losses. In all this, Henry did not doubt a bit, and then dealt a second blow, sending two more groups to the attack.

This came as a surprise to the Mongols - for a while it even seemed that they were about to be defeated. But the nomads pulled the fight literally in the balance. Rumor has it that they managed to embarrass the enemy, shouting in Polish: "Run, run!" But is it true, or is it about the later excuses of the surviving, but beaten witnesses, it is difficult to say.

Be that as it may, 4 out of 5 units of Henry were defeated.

Then the prince spat on everything, and led the last group to attack. But the outcome was already a foregone conclusion. In addition, the Mongols decided to lay out one of the trump cards - the smoke mixture mined in China. She not only upset the spear attacks, but also hit the endurance of European riders and horses.

At the end of the day, the army of Henry was utterly defeated. The prince himself, realizing that everything was in vain, tried to retreat to nearby Wroclaw, but was caught, brought to the leaders of the Mongols, and beheaded. 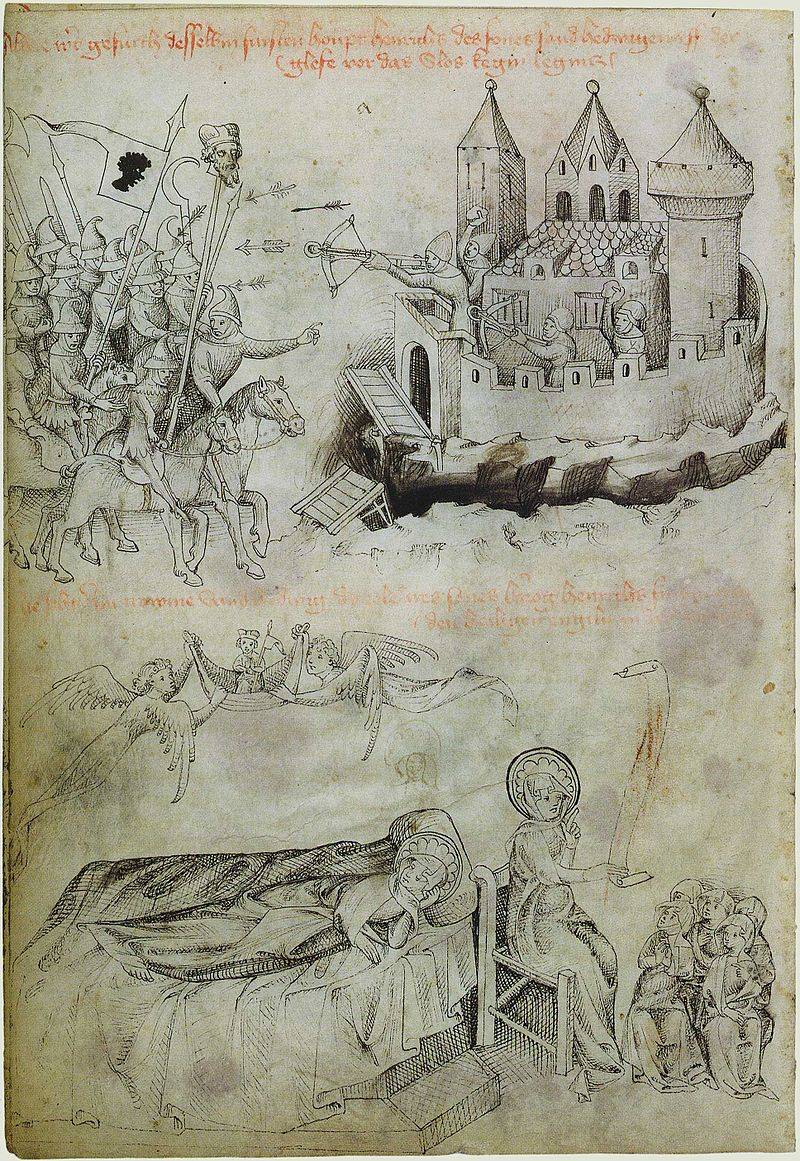 Mongols approach Legnica with the head of Heinrich the Pious
After that, Tumen moved to the nearby city of Legnica - in honor of him they called the battle. The Mongols offered the residents to open the gates, but there were no fools inside - everyone understood that those who had become simply cut off, removed values ​​from the city, and burned everything. Having been refused, the nomads decided not to get involved - the Polish troops were defeated anyway, and now they should go to Hungary to help the main forces.

But it was already completely different история.