In the year of the 75th anniversary of the Victory, the war with her memory flares up with renewed vigor 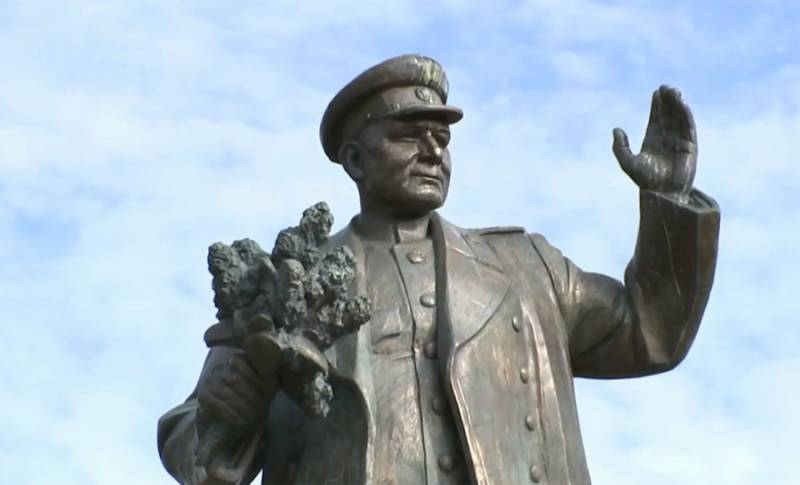 The regret expressed by the Russian Foreign Ministry about the lack of support on the part of some countries of the resolution recently adopted by the UN General Assembly on the fight against the glorification of Nazism has good reason. There is no doubt at all - just this year, the year of the anniversary of the Victory in the Great Patriotic War, some people will leap with particular force hatred of both its heroes and their descendants. And it will certainly pour out not only into the next false and insulting verbal demarches for all of us, but also into a very specific vandalism with Russophobic subtext.


It is not for nothing that the resolution referred to by the Russian diplomatic department pays particular attention to the inadmissibility of “a war with monuments to the fighters against Nazism and fascism,” which, as indicated there, “is gaining momentum in individual countries.” At the same time, it is also accompanied by the “erection of monuments and memorials” to the most vile scum of that terrible time - from the SS to various Nazi lackeys and minions.

The fact that one does not happen without the other is perfectly proved by the example of Ukraine, for the sixth year already, "getting rid of the remnants of the Soviet past," but actually systematically destroying the memory of millions of Soviet people, including Ukrainians, who were victims of the Nazi occupation and those who gave their lives for liberation from it.

Not so long ago, the mayor of Ivano-Frankivsk Ruslan Martsinkiv came up with the "brilliant" idea of ​​establishing another monument to Bandera. It is proposed to do this in Konotop, a city located in the Poltava region, which has nothing to do with the bloody “activity” of this ghoul. The question, it seems, has already been resolved at the level of the local authorities there, confident that the townspeople are already jumping in anticipation of the arrival of a street and the idol of a "visionary" in their village. The main "trick": this rottenness will be the most eastern image of Bandera in the "unfathomable", separated from the territory of Russia only 40 kilometers away and a specially "turned face" in her direction. It seems to me alone that all this clearly smells like a psychiatric diagnosis ?! It’s interesting, by the way, how long will he stay there - even if someone has enough dope to harm Konotop, who is not involved in Bandera?

Confirmation of the same trend is the initiative of Pavel Novotny, the municipal head of one of the districts of Czech Prague, where they recently "fought" with such fury against the monument to the liberator of this city, Marshal Ivan Konev. Now, Mr. Head wants to erect a monument to Hitler's minions - from the "army" of General Vlasov. And the Konevu monument, desecrated over and over again by cowardly scum with the actual connivance of the local authorities, is going to be removed there - "so as not to get it dirty." The same approximately “excuses”, which are much more successfully defined by the crude word “excuses,” are also being invented in other countries, where the uprooting of the materialized memory of the Victory and its creators is carried out with ever greater frenzy. For example, in Lithuanian Šiauliai, the obelisk to its liberators, towering above their very real graves, was demolished under the pretext of “reconstruction” of the central square where it was located. Alas, this is quite a common picture for the Baltic States today, on the territory of which memorials in honor of the Great Patriotic War are being destroyed everywhere and purposefully, but instead, “monuments” to SS men and policemen are climbing with filthy mushrooms.

There is no need to talk about Poland, where monuments to Soviet soldiers have recently become a rarity disappearing before our eyes. After the bitter truth publicly expressed to some of the people there “historical figures "by Vladimir Putin, the Polish" patriotic community "comes with poison. You can be sure that to eradicate and "burn with a hot iron" everything that is related to the great deeds of the heroes of the Great Patriotic War in the year of the anniversary of Victory, they will start with tripled enthusiasm - to spit into the soul thicker, hit harder.

In truth, all this bacchanalia suggests that the best tribute to the memory of our glorious ancestors-winners would be the adoption at the state level of a decision that would guarantee by law that all those who try it in one way or another will be brought to real responsibility to slander. Naturally, without regard to their citizenship, positions and other regalia. Difficult, you say? Well, certainly not harder than our grandfathers to beat Hitler!