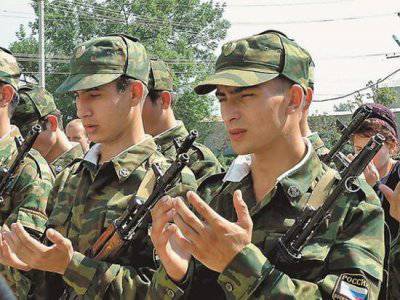 In July, for the first time in many years, 150 youths from the Chechen Republic were called up for military service. It is planned that they will give up their military duty in the 249-m special motorized battalion of the internal troops of Russia. This part is stationed in Chechnya on a permanent basis. News about the "Chechen appeal" requires serious attention for several reasons.

First, a full-fledged recruiting campaign in one of the most problematic Russian regions has not been carried out since the 1991 year. And the appeal of twenty years ago passed before the collapse of the Soviet Union. After the proclamation of the de facto independent Chechen Republic of Ichkeria and the beginning of many years of confrontation between the separatists and the central Russian government, which was also accompanied by numerous intra-Chechen confrontations, there could be no recruiting campaigns on a regular basis. For them, it was necessary to establish a full-fledged state presence in the republic. This task is still not fully resolved today, since the work of power institutions is often replaced by personal and informal decision-making and coordination mechanisms. And today it is premature to say that the full-fledged appeal has returned to Chechnya.

Inter-ethnic incidents in military units are no longer exotic

So, according to the republican military registration and enlistment office, the number of citizens of draft age in the territory under their jurisdiction is about 80 thousand people. At the same time, the problem of military service by recruits from Chechnya beyond its borders has not been solved yet. However, recognizing all these facts, it is impossible not to see a certain dynamic. In September last year, the Deputy Chief of the General Staff of the Russian Armed Forces, Colonel-General Vasily Smirnov, stated that the autumn draft in Chechnya must pass, as in other regions of the Russian Federation. In fact, the whole campaign has been reduced to only two procedures - medical examination and registration of potential recruits. In July of this year even a modest step forward was made. Next year, the number of recruits is planned to increase at least twice compared with the current figure.

It is also impossible to ignore all previous attempts to organize an appeal from Chechnya. Meanwhile, they were undertaken even during the second anti-separatist campaign in 2000. Then the order 20 man was sent to serve in a military unit in the Moscow region. However, this experience was not crowned with success due to conflicts on a national basis. A second attempt to organize a call was made in 2002. Chechen conscripts were sent to units in the Voronezh and Saratov regions. The result was also disappointing. After another five years, attempts to make a call from Chechnya caused a lively discussion and even tough hostility within the republic. Well-known officials and public figures (most likely, not without the approval of the republican authorities) opposed the service of conscripts in the internal regions of the Russian Federation. At the same time in such units as the battalions "North", "South", "East", "West" ethnic Chechens served under the contract. In August 2008, the Vostok battalion took part in the “five-day war” with Georgia.

Secondly, the July appeal of this year in Chechnya passed shortly after the appearance in the media of information from a "high-ranking source." 18 June RIA "Novosti", citing an anonymous representative of the Ministry of Defense reported that this year, recruits from the North Caucasus republics (including, of course, Chechnya) will not be recruited into the ranks of the armed forces. It was also reported that conscripts from the North Caucasus who reside in other Russian regions will avoid invoking. At the same time, such a decision was motivated by the alleged need to resist the "community groups" built on the ethnic principle and non-statutory relations.

It must be said that this kind of "authoritative opinions" have already been voiced in the media more than once. And not always on condition of anonymity. So, 15 of April last year at a press conference devoted to the next spring draft, military commissar of the Chelyabinsk region Nikolay Zakharov made a sensational statement. According to the military commissar, people from the North Caucasian republics should not be drafted into the ranks of the Russian army. At the same time, in his speech, a high-ranking official in uniform referred to the appropriate order from the General Staff, explaining this decision by the need to reduce inter-ethnic tensions in the military environment. The presence of a certain "secret directive" allegedly prepared by the Russian generals was widely discussed by journalists. Subsequently, representatives of the Ministry of Defense denied the very existence of the "North Caucasian directive."

And, nevertheless, from time to time from the military department there are statements that can be interpreted as a certain "probing of the soil." Or, as proof of the fact that the Ministry of Defense and the General Staff have not yet developed a certain single line of conduct with regard to draftees from problem republics. Surely the idea of ​​introducing certain restrictions on the call of immigrants from the North Caucasus is discussed in the army's top. Add to this and from time to time arising discussions about the introduction of mono-ethnic military units.

Meanwhile, in March last year, the head of the military prosecutor’s office, Sergey Fridinsky, bluntly stated that today in the barracks "national gangs are putting their order in order," while noting the special role of all the same Caucasians. According to the military prosecutor of the Baltic fleet Colonel Sergei Tsipushtanov, due to the suspension of military service from the North Caucasus, the number of incidents in the Navy decreased by almost a third.

In fact, inter-ethnic incidents in Russian military units and subunits involving immigrants from the republics of the North Caucasus, unfortunately, are no longer exotic. Too many facts do not speak, but shout about it. In 2009, a case broke out in the Baltic Fleet with the participation of Dagestan conscripts. A year later, a mass brawl involving people from the Caucasus took place in a military unit near Moscow. A similar incident happened in the Perm region, where 120 servicemen from the North Caucasus republics refused to obey the order. As a result, even had to turn to local representatives of the Muslim clergy. Thus, it cannot be said that the opinion of various representatives of military structures originated from scratch.

Conscripts repeat the type of relationship that we see on a nationwide scale.

But the army is not a separate planet. This is just a cut of the entire state. And if the state policy in the North Caucasus itself is focused not so much on its comprehensive integration into the all-Russian social and political processes, but rather on maintaining loyalty from the local elites, then why should we expect from draftees a fundamentally different behavior? They simply repeat at their level the type of relationship that we, alas, often see on a nationwide scale. As the Russian federal official lets the situation in the republics of the Caucasus take a chance, by making amendments for “local peculiarities,” so does an officer or a sergeant enter the barracks. As a result, the power vacuum is filled with non-statutory relations, where the law of force becomes the law.

Today, the Russian army faces the same choice as the Russian state. Or she takes on the task of integrating the North Caucasian draftees, bringing order to the barracks, that is, carrying out the same deprivatization of power. Or she, moving away from solving acute problems, is promoting “separatism in uniform”. Nor will we forget about the social significance of an institution like the army. In a poly-ethnic state, it becomes an essential tool for the integration of different segments of society. We should not forget that for the labor-surplus Caucasus, with its high unemployment, the army has always been a social elevator. Removing it means not only depriving yourself of potential allies, but also gaining the growth of an extremist underground.

Note that the experience of solving such problems is by no means unique. After the murder of the famous Negro preacher and human rights activist Martin Luther King, blacks and white soldiers of the US Army left their positions in Vietnam and went to a "showdown" between themselves. At the same time, in April 1968, the center of Washington, after a series of racial riots, did not look any better than the center of Grozny in 1995. However, large-scale government work to integrate different segments of America into one political nation and overcome segregation yielded results. Nowadays, the “racial issue” remains an extremely complex social, but not topical political issue.

It is also necessary to understand that overcoming army "dedovshchina" and interethnic tension will be successful only when the state system as a whole takes the path of healing, strengthening the rule of law, law and order and eradicating the dictatorship of the notorious "fifth point". Only in this case, conscription will cease to be a "premonition of civil war." And it will be filled with the content of the constitutional obligation of all citizens of the country.