Another example of American cynicism is responsible for the terrorist attack in Damascus ... Bashar Assad himself 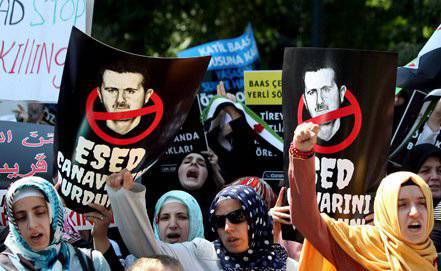 Washington has once again taken a cynical approach by commenting on the July 18 attack in Damascus, whose victims were high-ranking officials, including Defense Secretary General Daoud Rajha.

Commenting on this crime, White House spokesman Jay Carney said that "it is because of the continuing campaign of the Syrian President against his own people that we are witnessing a situation that is getting worse and worse." “I think the incident / and this is about the terrorist attack!” ITAR-TASS / on Wednesday clearly shows that Asad is losing control, that the violence is intensifying, not weakening, ”he said. According to him, if Assad stays in power, "there will be even greater violence and chaos in the country."

Patrick Ventrell, the US State Department spokesman, did not seek to hide the true attitude of the United States to the terrorist attack in Damascus. Commenting on the attack of terrorists, he drew attention to the fact that the dead and wounded, in his words, "were the key architects of the campaign of repression carried out by the Assad regime against the Syrian people." And to the question of whether Washington considers the current rally in Damascus a "turning point in the conflict," Ventrell said: "We believe that the opposition is undoubtedly making progress." At the same time, he acknowledged, the US representatives have already contacted the Syrian opposition after the July 18 attack. Maybe even praised?

It is difficult to regard such statements as anything other than encouraging anti-Assad forces for new crimes. However, while support of the opposition’s crimes is still manifestly veiled, in other areas Washington is openly fighting to help opponents of the regime in Damascus openly. Another evidence of this is the proposed by the West / led by the United States, of course / the new draft resolution on Syria, the vote on which / as well as the Russian draft / is expected in the UN Security Council on Thursday. The western option limits the tenure of observers in the country 45 to days and contains the threat of sanctions against Damascus, as provided for by the head of the UE Charter. The latter categorically does not suit Moscow and Beijing - they advocate, as the Russian draft says, extending the term of the UN mission for three months and solving the humanitarian and social problems of the population.

However, this option, which corresponds to the plan of the UN special representative and the League of Arab States Kofi Annan, does not suit the West, which, it seems, after success in overthrowing the regime in Libya that he does not like, wants very much to switch to military intervention in Syrian affairs. By the way, the above-mentioned chapter of the Charter provides for such actions, although Washington argues that for the time being the discussion deals only with the economic sanctions mentioned in this section of the UN Charter.