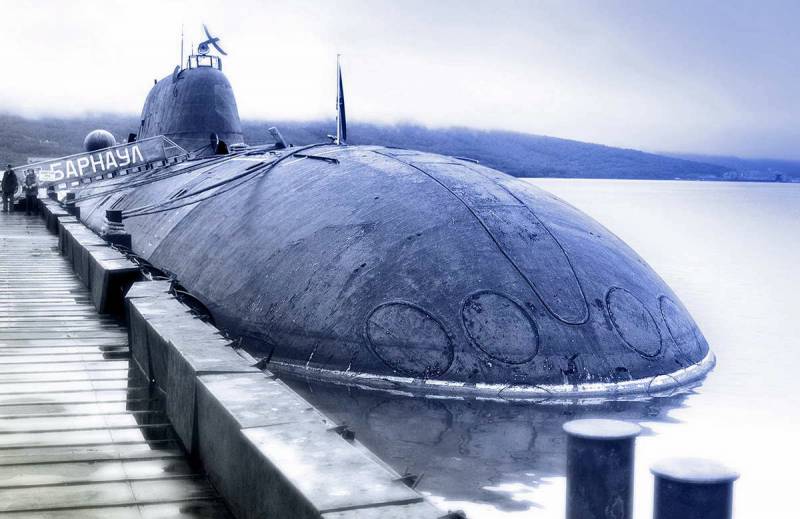 Given the strategic importance of the Far East for Russia and its proximity to the major naval powers (USA, Japan and China), the Pacific the fleet a special role is assigned in ensuring the security of not only the eastern borders of the country, but also of Russia as a whole.


Of course, the main task of the Pacific Fleet is to maintain the combat readiness of units and subunits, especially strategic nuclear forces. At the same time, it is significantly removed from the industrial centers of Russia and the largest transport hubs, which directly affects its combat effectiveness. In this article, the author analyzed the real state of multipurpose nuclear submarines of the most remote fleet of Russia, the backbone of which at the beginning of the zero years was 6 MAPLs of the 971th project "Pike-B", which without exaggeration was the most successful project for the whole history domestic submarine shipbuilding. The first boat of the 971th project received the name "Bars", which became a household name for this series of submarines. It was on the “Barca” that were assigned the tasks of anti-submarine warfare.

The basis of combat readiness is a well-established repair. According to regulatory documents, the ship can only be operated for a certain period. For a nuclear submarine, this period is 10 years. After this period, the ship is required to carry out an average repair. In the absence of such repairs, the ship must be decommissioned. Between medium repairs, as a rule, a technical readiness restoration procedure is carried out, which is exclusively a repair procedure. A ship comes to the restoration of technical readiness, the further operation of which is unacceptable for various reasons - wear or emergency condition of systems and mechanisms. The task of the plant is to restore all systems to a condition suitable for operation. If this is not possible, ensure nuclear and radiation safety of the order. Despite these requirements, “Barca” was exploited a lot and intensively, without going through the average repairs prescribed by the regulations.

K-263 Barnaul in 1998 was withdrawn from the permanent readiness forces in anticipation of an average repair. The ship was used as a source of spare parts and was located in the waters of the Far Eastern Plant Zvezda OJSC in Big Stone. The Barnaul MAPL did not wait for an average repair; in June 2018, the Neftegaz-55 vessel of the Primorsky branch of the FSBI Morspasluzhba carried out the towing of the MAPL from Bolshoy Kamen Bay to Chazhma Bay, where it was disposed of in the PD-41 floating dock together with SSV-33 "Ural".

K-322, “Sperm whale” in 2003 in the dock “Zeya” was transferred and delivered to the workshop of the FSUE “Amur Shipbuilding Plant” in the city of Komsomolsk-on-Amur for an average repair. In fact, work has not been carried out all this time, and the ship was used as a source of spare parts. 09.10.2019/2020/3 “Sperm Whale” was withdrawn from the Pacific Fleet, excluded from the lists of the Navy. In XNUMX, according to the contract placed by Rosatom, Sperm Whale will be disposed of. Its disposal is planned to be carried out at the location in PJSC Amur Shipbuilding Plant, followed by transportation of the XNUMX-compartment unit along Amur to a long-term storage facility. 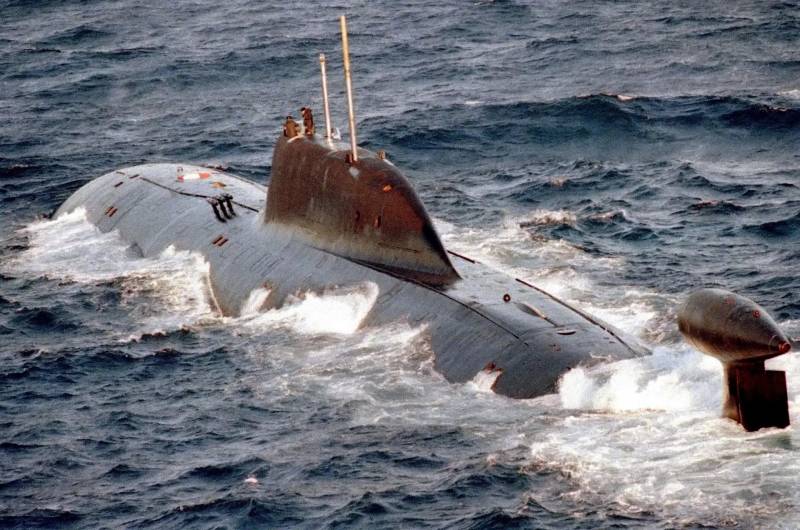 K-331 "Narwhal" by the order of the commander of the Pacific Fleet dated March 14.03.2001, 01.11.2019 was given the name "Magadan", which was not official due to the fact that the name of the ship was assigned only by order of the commander-in-chief of the Navy (06363/2012/2018 the name "Magadan" was officially assigned by order of the commander-in-chief of the Navy submarine project 2019). The reason for the renaming was patronage, which, due to the inability of the state to properly maintain the fleet, consisted in the provision of humanitarian assistance. In those years, mainly food was brought to ships. Since XNUMX, Narval has been in the waters of Far East Plant Zvezda OJSC in Bolshoi Kamen, pending average repairs. Only at the end of XNUMX, “Narwhal” was delivered to the boathouse of the plant. In the second half of XNUMX, according to the shipyard’s press service, MAPLs were being diagnosed and equipment dismantled. 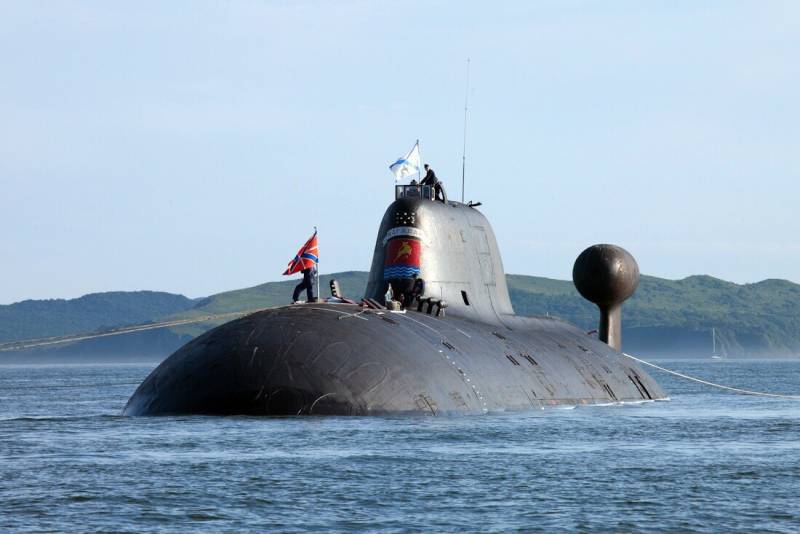 K-391 Bratsk arrived in 2003 at OJSC Northeast Repair Center in Vilyuchinsk and was in the water area of ​​the enterprise awaiting repair. The contract for the repair of the technical condition with the extension of the overhaul life was concluded between the Ministry of Defense and the enterprise in 2011. However, the contract was not executed due to uncertainties in the actual volume of work performed, including the lack of a part of the equipment to be repaired on the ship, in connection with its dismantling by personnel before setting up for use on other MAPLs of this project.

In 2014, the K-391 Bratsk and K-295 Samara were transported by the Dutch company on the TransShelf dock from the Far East to Severodvinsk by the Northern Sea Route for the purpose of their repair and modernization at Project 971M to Zvezdochka Ship Repair Center JSC ”, As well as two of the same type of MAPL of the Northern Fleet:“ Leopard ”and“ Wolf ”. However, after the troubleshooting, they simply stand at the wall of the enterprise in anticipation of being placed in the boathouse, which will take place no earlier than the withdrawal of Leopard or Wolf. At the same time, information was circulated in the media about the possible leasing of K-295 Samara to India. At the same time, there is currently no reliable information confirming the implementation of this contract. 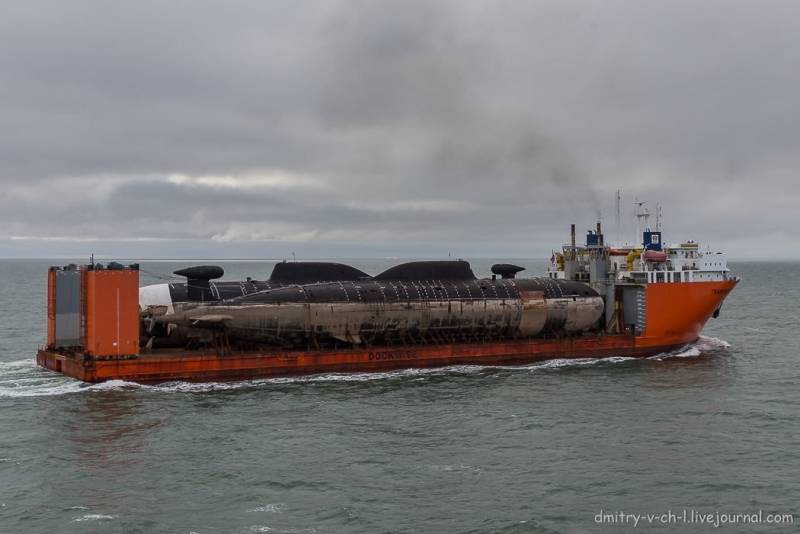 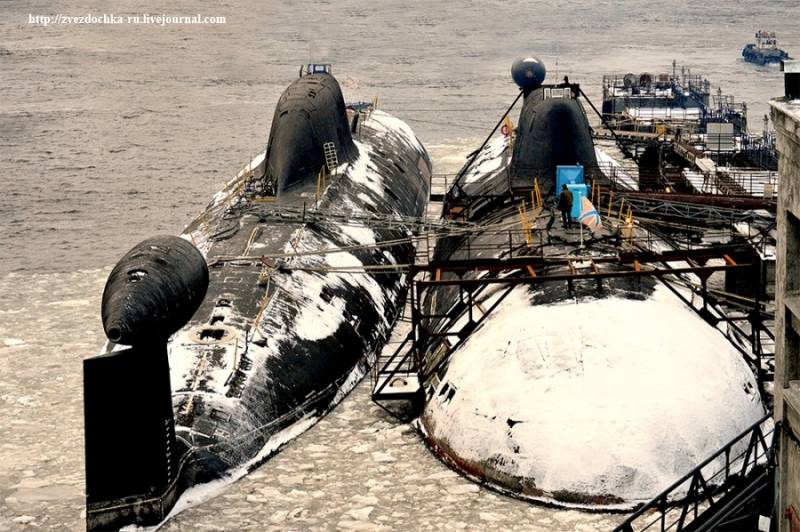 K-419 "Kuzbass" today is the only combat-capable ship of this type in the Pacific Fleet. Since 2009, K-419 has been on the restoration of technical readiness at Far East Plant Zvezda OJSC (Bolshoi Kamen). The delivery of the ship was repeatedly postponed, the Main Military Prosecutor's Office of the Russian Federation revealed fraud in the implementation of the state contract, criminal proceedings were instituted on the facts of abuse committed during the repair of the Kuzbass MAPL. Only in 2016 did MAPL Kuzbass return to the Pacific Fleet. 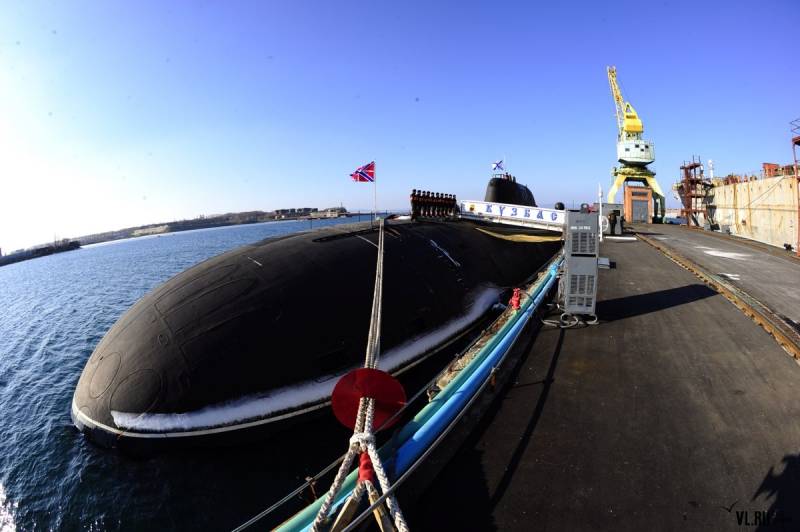 Thus, in view of the failure to meet the deadlines for carrying out an average repair, two Bars are irrevocably withdrawn from the Pacific Fleet, three are waiting for an average repair, and only one is operational. Years go by, ships are getting older, becoming more obsolete ...

We are in Yandex Zen
List of destroyed the largest and most high-tech enterprises
Military reform as an integral part of the security concept of the Russian Federation: Systematic dynamic assessment
57 comments
Information
Dear reader, to leave comments on the publication, you must to register.