The non-lethal weapon of capitalism: the US has found the weak spot of modern Russia 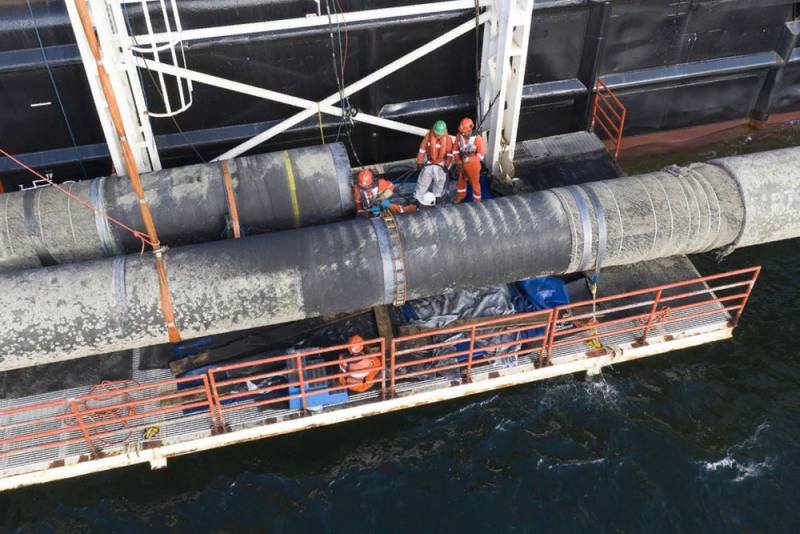 In the German press there are materials dedicated to the fact that the implementation of the Nord Stream-2 project faces serious difficulties after the United States imposed sanctions against companies involved in the construction of the gas pipeline.


Recall that just a few hours after Donald Trump signed the US military budget for 2020, where their sanctions against SP-2 were prescribed, the pipelines of the Swiss company Allseas left the gas pipeline construction zone. The German media noted that US congressmen deliberately introduced sanctions into the US military budget documentation so that the president did not have any opportunities for discussion.

Meanwhile, a major German newspaper, Frankfurter Allgemeine, published an article stating that "Russia is looking for a replacement for ships to complete the construction of the gas pipeline." Russia is really trying to find a replacement for the Swiss Allseas, which fled under American pressure. But somewhat confused is the position of German experts. They are extremely cautious in discussing problems with SP-2 and are trying to set everything up as if the gas pipeline is a purely Russian project. The material ignores the fact that the implementation of the Nord Stream-2 project is actually a pan-European business - thousands of European engineers and workers took part in it (in the implementation), the project is the focus of huge investments made, including by Germany itself.

Therefore, if we look for a replacement for the pipe-laying vessels that have left the Baltic Sea, then, logically, all interested parties - Russia and Germany in the first place.

What attracts particular attention in this whole situation?

The fact that the United States seems to have found a weak spot in modern Russia. You can say as much as you like that the sanctions “only boost the domestic economy along with the degree of patriotism of the population”, but in this case the following is clear: Washington was able to stop the project, which is strategic for Russia and Europe, with a targeted strike. At least he could suspendthat makes Moscow go on a straight line and, what a sin, conceal close contact with Kiev. If a couple of months on the air of the federal media discussed “the collapse of Ukrainian transit” (“at best, on the shoulder of the shoulder, we will sign a one-year contract for pumping 10 billion cubic meters”), now this rhetoric has changed.

In the United States, after analyzing the situation, they came to the unequivocal conclusion that in the current conditions Russia cannot afford to stop transit through the territory of Ukraine. Gazprom needs money, and therefore it will continue to pump. About the "Bandera in Ukraine" again decided to forget. Accordingly: an American project called "Ukraine-Anti-Russia" will continue. The American congressmen found a breeding ground for him, and this is a fact.

The result can be only one: draw conclusions.

The obvious conclusion: only the strong can afford to withstand American sanctions, which means that Europe is weak. The second conclusion: Russia itself has entered the large "capitalist family", and therefore it would be foolish to expect from the same "Gazprom" to uphold Russia's positions in terms of protecting geopolitical interests. You can, of course, give out an “agreement” with the Kiev authorities on a further 5-year pumping, but this does not cancel the fact that the money doesn’t smell. Even the presence of frank Russophobes in the camp of the Ukrainian authorities does not prevent negotiations, declaring all this "pragmatism for the sake of partnership with Europe." But the fact that Europe itself supports sanctions against the Russian Federation is somehow not even customary to recall.

And how many times have representatives of the authorities said that SP-2 is a commercial project, not a political one. Here on businessmen and hit an American baseball bat. Although ... what kind of "hit" - just waved ... and they immediately began to scatter through holes.

The third conclusion: not in vain at the moment when the Red Army liberated Europe from Nazism, Western financial bags hastily set about discussing the issue of dollar domination in order to be able to subjugate entire countries by "non-lethal" methods. The built-up system of this domination operates to this day. And with the thesis "and we have gas in our apartment," this system today allows itself to play in a way that is convenient for it.