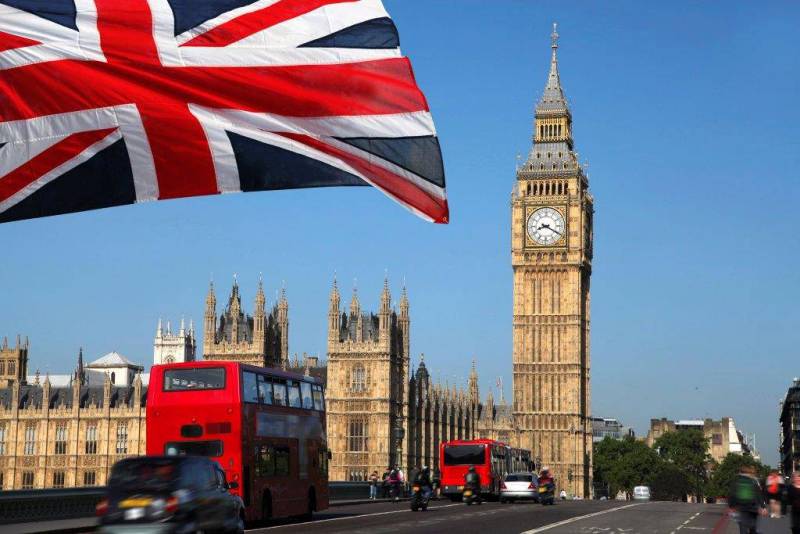 In the UK, parliamentary elections were held. And in their context, in the country, as well as in the USA, they started talking about the possible interference of Russia in British political life. In the victory of the conservatives in the election, their opponents saw the “Russian trace”. Everything repeats exactly according to the American scenario.

Russia accused of deliberate disorganization of the EU and NATO

One of the most common accusations of Labor against conservatives is the connection of the latter with American Republicans and, first of all, Donald Trump's entourage.

In the popular publication The Guardian, an article appeared by Glenn R. Simpson and Peter Fritch, allegedly revealing maps of US-Russian interference in the British election.

First, a little about the authors. Glenn Simpson and Peter Fritch are not ordinary journalists, and not even quite journalists. After a scandal with Russia's alleged interference in Trump's election campaign, these people created Fusion GPS, a research firm that studies the facts of Russian support for Donald Trump while he was still his presidential candidate.

According to the authors of the article, since the 2016 of the year both the United States and Great Britain have been objects of increased attention from the Russian authorities. Putin wants to keep in power in Washington and London those forces that are set to weaken the supposedly interfering alliances: the European Union and the North Atlantic Alliance.

In fact, of course, both the EU and NATO are bent both without Putin and without any Russian participation. The EU and NATO have a lot of unresolved internal problems, which only worsen every year. And the reasons for these problems are not in the imaginary Russian intervention, but in the numerous contradictions between the key members of the European Union and NATO.

Firstly, the US and the EU are not so much partners as competitors. The United States has always feared the growth of Europe’s independence and well-being. Otherwise, how to explain Washington’s fear of the idea of ​​creating a pan-European army?

Secondly, in the European Union itself there are very serious conflicts along two lines. The first one is financial and economic, since in fact several of the richest countries in the European Union contain more economically less developed states. The second, even more important, is the political and ideological one, according to which key discrepancies are observed between the multiculturalist leadership of the EU, which welcomes migration, and the countries of Eastern Europe, which seek to preserve their national identities and protect themselves from the influx of immigrants from Asia and Africa.

As for NATO, within the alliance, the main initiator of the contradictions is precisely the United States, which insists on increasing defense spending. In addition, there are long-standing conflicts between NATO members, for example, between Turkey and Greece. Thus, Russia is not involved in the contradictions in the EU and NATO, unlike the United States or Great Britain.

Nevertheless, the press sees Brexit as the “hand of Russia” in the same convincing voters that it is Putin who favors Britain’s withdrawal from the European Union, which is why he supports the British conservatives. Naturally, no one is embarrassed by the fact that conservative leader Boris Johnson, who retained the post of British Prime Minister, always criticized Putin and Russian politics as a whole and did not get tired of emphasizing the complete lack of sympathy for our country.

In the United States since 2016, special prosecutor Robert Muller studied the possible influence of Russia on Trump’s election campaign for two years, and in the UK his own Müller did not appear, but he, as The Guardian notes, should be found. The British media complain that in general the British establishment was rather passive and did not expose the alleged Russian interference in the country's political life. For some reason, the British and American press do not consider the version that reputable British politicians simply do not want to disgrace themselves and load themselves up with such “yellow” accusations, but it’s a pity, because it looks more like the truth. 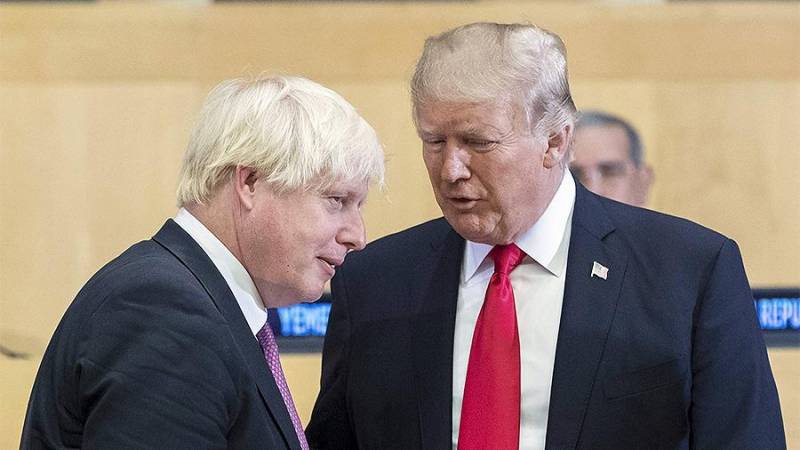 As for the ties between Trump and Johnson, the British press notes that the election campaign of the British conservatives was carried out by the very same people who at one time “elected” Donald Trump as the president of the United States. In addition, the British complain that the country's laws on libel and official secrecy have prevented exposing the alleged Russian influence. As a result, many senior officials and politicians are in no hurry to disclose the information that they possess.

But how did foreign intervention in the British elections become possible? Such a “masterpiece” is born in the inflamed consciousness of British authors: supposedly, conservatives in the UK and Republicans in the USA allegedly could not calculate the consequences of Russian intervention and considered it tactically useful for themselves during the election race.

As a result, a situation has created that allows Putin to "damage the country's centuries-old democracy" - this is how the article in The Guardian ends, reflecting the general position of the British Labor and American Democrats, who are dissatisfied with the victory of their political opponents in the elections.

Interestingly, Johnson’s opponents even found a “compromising evidence” that, in their opinion, testifies to the prime minister’s relations with Moscow: in the distant 90 years, Dominic Cummings, who was an adviser to Boris Johnson, worked in Russia. And The Times newspaper specifically found a photograph of the politician who was captured on it by busy knocking out a carpet in the courtyard of a Moscow house where he then resided.

But how many people lived in Russia in the nineties? Such incriminating evidence is particularly ridiculous, given that one of the whistleblowers, William Browder, the head of the Hermitage Capital fund, according to Russian prosecutors, is a dangerous criminal in several criminal cases in Russia, including murder cases and the organization of a criminal community. So, the Investigative Committee accuses Browder of organizing the murder of Russian businessman Alexander Perepelichny.

Johnson: there was no Russian intervention

55-year-old Boris Johnson himself, of course, rejects any rumors spread by the British press about Russian interference. It’s very difficult to accuse Johnson of Russophilia, but he understands that any accusations against Russia of meddling in the elections undermine his own position. After all, if the election is not real, then the prime minister is not real!

Therefore, Boris Johnson constantly says that Russia did not intervene either in the internal affairs of Great Britain or in Brexit. By the way, he, Johnson, is an ardent supporter of Brexit, therefore it is not easy to undermine the British’s faith in the usefulness of leaving the country from the EU.

There is no evidence that Russian interference in any vote in the UK took place. The whole idea that someone influenced the decision of millions of people is comparable to the theory of the Bermuda Triangle.

These words of Boris Johnson circled the whole world, showing that the head of the British government will not support those who speak of Russian interference in the election.

However, former British Attorney General Dominic Greve and Johnson’s critics from the Left Opposition accuse the prime minister of deliberately not giving rise to a report prepared by members of the lower house’s Intelligence and Security Committee. This report contained information about allegedly interfering Russian intelligence services in the Brexit referendum and the 2017 elections of the year.

The parliamentarians who made up the report claimed that they relied on data from British special services — the Government Communications Center, MI-5 and MI-6. On the 50 pages, they described in detail how, according to their version, the Russian side intervened in British political life.

But Johnson did not consider the document, moreover, the report was also not submitted to the parliamentary discussion. According to critics of the prime minister, this is also proof of, if not collusion with the Russian side, then at least Johnson’s desire to close the topic with interference so that its discussion does not harm his own political career. Enemies of the British prime minister immediately compared him with Donald Trump.

Interestingly, Johnson’s reluctance to launch the ill-fated report provoked a reaction even from Hillary Clinton. She hastened to call the refusal to publish the report a shame and again remembered Russia, which supposedly continues to interfere in American and British elections in order to destroy Western democracies. That is, both Trump's critics and Johnson's critics found themselves on the same front line, which allows them to be suspected, not the American president and the British prime minister, in conspiracy to achieve certain political goals.

In the United Kingdom, unlike the United States, they practically do not hide the fact that talking about Russian interference in the country's political life is such a big game. Representatives of the British establishment fulfill their roles: Johnson sluggishly dismisses, recalling a school geography course about the Bermuda Triangle, and his Labor opponents are equally sluggishly perplexed as to why the prime minister slowed down the report in the lower house of parliament.

In fact, accusations against Russia are beneficial to all parties to the British political spectrum. For Boris Johnson, such rumors can even improve his political image, as he shows himself to be a “cool” politician who they are trying to discredit. His opponents, in turn, gain political points, showing themselves to be more principled supporters of the political sovereignty of Great Britain.

In these political games, designed for an internal audience, Russia plays the role of a scarecrow, which at one time was, for example, international communism. As American and British politicians used to accuse each other of having ties with the Soviet Union and the Communists, now they are talking about Russian interference in the elections. Decades go by and the technologies are essentially the same.

Russia reacts to allegations of interference with the election, as always, negatively. Foreign Minister Sergei Lavrov once even noted that he absolutely agreed with Boris Johnson, who then headed the British diplomatic department, in his assessment of the version of Russian intervention. 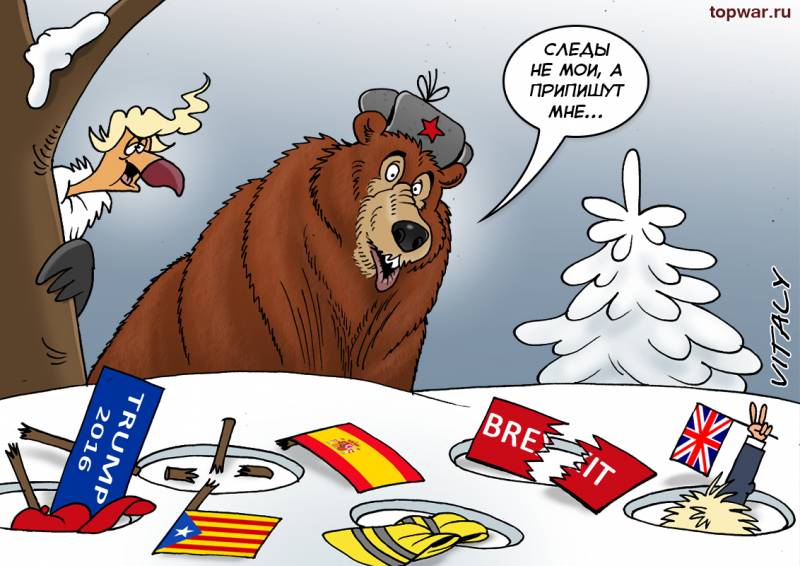