The Russians do not need a revolution, but take out the freedom of speech and lay it down! 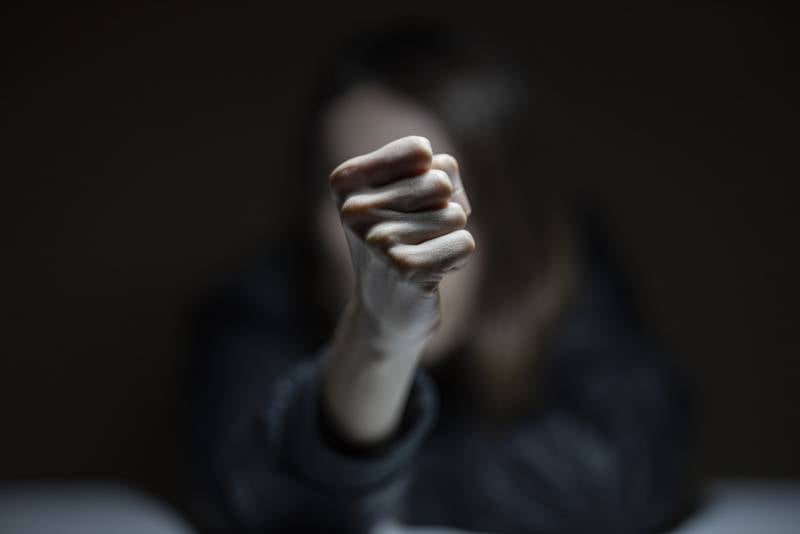 Project "ZZ". Ombudsman Boris Titov, who has been protecting the rights of entrepreneurs in Russia for seven years, said in an interview with foreign journalists that “everything is fine” in the country. The economy is in a stable position, and inflation is under control. True, "the economy is not developing," because it was "strangled by politics." But it is not a revolution that is needed; reasonable transformations are needed. Another European publication cites the results of a recent Levada poll, which found that the proportion of Russian citizens who consider freedom of speech to be one of their most important human rights has grown over the past two years from 34% to 58%.

Alice Botha and Uwe Jean Heuser took for a German newspaper «Die Zeit» an interview with Boris Titov, whom they called the “Putin Ombudsman [Putins Ombudsmann] for Russian Entrepreneurs”. The conversation was about Russia, about the missed opportunities, about the bureaucracy and the West.

At the beginning of the interview, correspondents recalled that Titov had been the “Ombudsman of Vladimir Putin” since 2012 since that time, since then he has defended the rights of Russian entrepreneurs.

The share of all acquittals in Russia is only 0,23 percent. According to Titov, the Russian legal system "is in a difficult position": there is no "neither sufficient transparency, nor the necessary professionalism." The country has a “powerful layer of bureaucracy” that “lives by its own rules.” If in the West power comes from above, then in Russia, according to Titov, there is "horizontal power superior to the power of the bureaucracy" and "working for its own interests." “To break this layer from above is very often very difficult. But even from below we can do little, ”says the Ombudsman.

Seven years Titov Ombudsman. And how has Russia changed during this time?

“As a civil servant, I must tell you: everything is fine! We have a stable economy, solid reserves, inflation under control. ”

Titov considers the foregoing as state truth, adding to this the following: "All officials are trying to make the state richer."

True, for businessmen, "the situation has even worsened." In the best years (2007 and 2008 are mentioned), the economy "developed well", competition began.

“Until 2008, crisis management provided order and clear conditions. Unfortunately, we have missed the moment for change. ”

According to Titov, until 2008, reforms were possible due to rising oil prices. Oil revenues were "passed on to the people," and demand "increased significantly." But the people who led the country out of the crisis of the nineties "did not understand that they had achieved success." They are "not changed." After all, when it comes to growth, companies should be given the opportunity to invest in new projects. Instead of supporting economic growth and weakening regulation, as is done everywhere in the world, the authorities adhere to strict fiscal policies. Raising taxes, high interest rate of the Central Bank ... Those who are in the government “responsible for finances” are to blame. Politics, according to the Ombudsman, "strangled the economy, the public sector began to grow, our dependence on oil and gas strengthened." So far this continues ... However, the president, as Titov believes, is "looking for a way out."

Is stability deceiving? Journalists recalled that Vladimir Putin's ratings were good until last year, when the retirement age was increased. Protests, people are unhappy ... Can it so happen that the current system does not transform?

Titov is convinced that the country needs economic reforms to create “real competition”. That's when the owners of small business "finally come and grow up the middle class, which is independent of the state." Demanding great reforms means "throwing wooden clubs at the steel door." This is an "inefficient way."

Effective, according to Titov, looks different:

“... we intend to create special zones with top-level administration. We need not revolution, but reasonable steps, as is customary in the business world. Our potential is huge. We may not recognize the country in ten years. ”

As for the West and Russia, according to the Ombudsman, the West still has not comprehended Russia. “Russia is a European country” (Russland ist ein europäisches Land), Titov said. 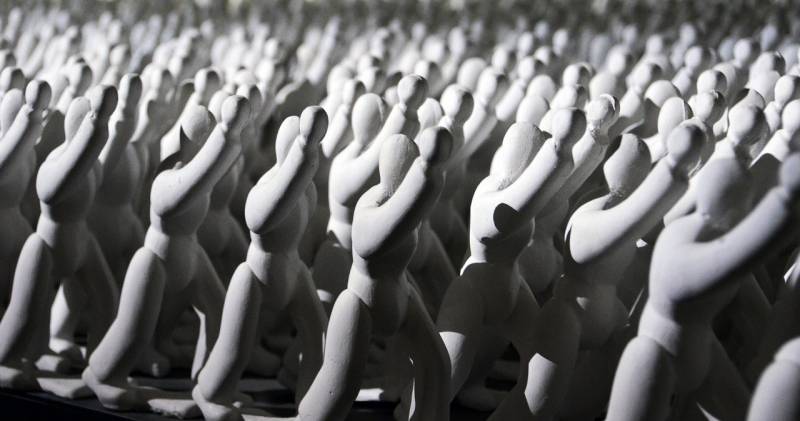 Evolution instead of revolution

And in this country, according to the Levada Center poll, residents are increasingly advocating freedom of speech.

The share of Russians who consider freedom of speech as a fundamental human right in two years has grown from 34% to 58%. The Levada poll was described in "Le Figaro" Pierre Sotrey.

(A survey of the center, we note in parentheses, was conducted on October 24 — October 30 of the year 2019. The results are published on the website Levada Center 20 November. The question was asked as follows: “Which of the human rights and freedoms, in your opinion, are the most important? Choose some of the most important positions for you ”(this means that respondents could choose more than one answer). The right to life, freedom, and personal inviolability came first (72% in 2017 and 78% in 2019). Major shifts in two years were manifested in the rights to a fair trial (50% and 64%, respectively), freedom of speech (34% and 58%), inviolability of property, home (46% and 57%), leisure and leisure (39% and 52 %), family formation and equality of marriage (28% and 43%), freedom of movement and choice of residence (29% and 42%), freedom of religion, freedom of conscience (22% and 40%), information (25% and 39%), freedom of peaceful assembly and association (13% and 28%). According to the center’s specialists, a significant increase in the frequency of answers may indicate the actualization of the agenda in the public opinion - human rights.) 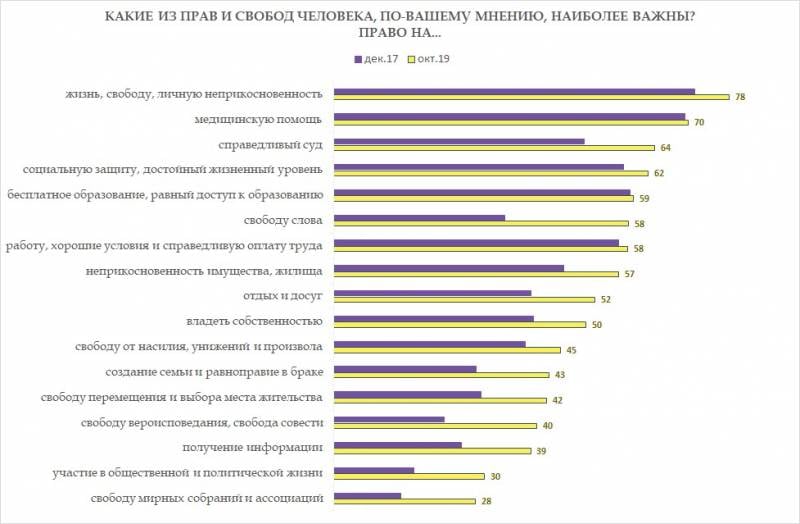 Pierre Sotrey believes that the data "confirm the trend that has been illustrated all summer on the streets of Moscow." The percentage of Russians surveyed who consider freedom of speech as a fundamental human right has grown over two years from 34% to 58%. But the case with Moscow is “especially indicative”. In this city, which has been stunned by “unprecedented protests” for the whole summer because of municipal elections, the corresponding poll result (the right to freedom of speech) more than doubled - from 24% to 52%, the Frenchman writes. (See tab. 3 on the Levada website.)

The publication of the results of this poll, the author believes, emphasizes "the growing political and social tension after the re-election of Vladimir Putin in the 2018 year." Tension has grown due to the “unpopular law on increasing the retirement age and several weeks of brutal repression” (in Moscow and other cities).

Anna Colin-Lebedev, a teacher at the University of Western Paris - Nanterre-la-Défense, sees in Russian society "a general dissatisfaction caused by both the deterioration of economic conditions and the local authorities." At the same time, the scientist clarifies: the growing "attachment" to these freedoms does not at all lead to a great inclination "to political and protest actions." Moreover, these actions are more likely to stagnate and even decline. This is evidenced by another survey of the same Levada Center. Indeed, only every fifth Russian declares his readiness to take to the streets in order to protect his interests.

If you believe the polls and expert interpreters, stability in Russia is hardly threatened - both stability in politics and stability in the economy. The desire of people to have the right to freedom of speech and other freedoms is easily explained; easy to understand and the reluctance of the masses to take to the streets with protests.

It is much more difficult to understand the enthusiasm of Mr. Titov, who believes in reasonable steps and huge potential. And the fact that the country will probably not be recognized in ten years. Blessed is he who believes, warmth in the world!