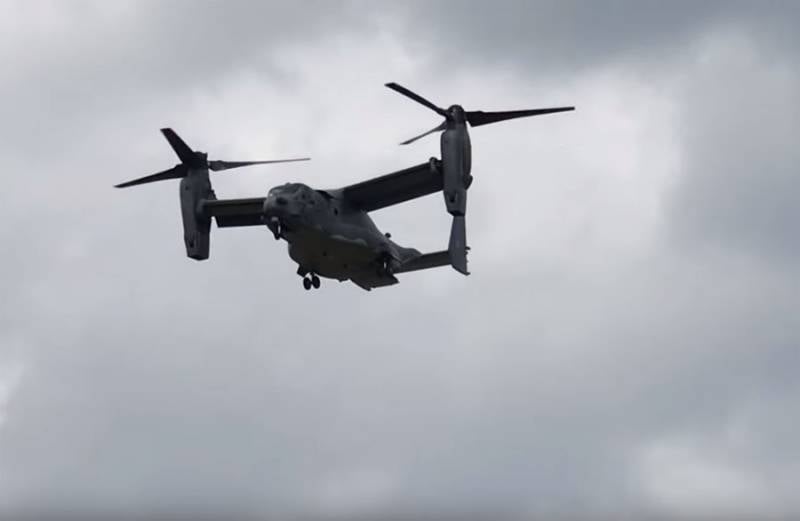 The Pentagon released a report that talks about the need for a new way to protect the engines of the American V-22 Osprey tiltrotors against particles of sand and dust. The report came out after an investigation of numerous accidents with these convertiplanes.


For reference: since the 2014 of the year, accidents occurred with the 7-th V-22 Osprey, and in some cases they, as stated, were due to the insufficient efficiency of the air filters that did not ensure the stable operation of the engines.

It is noted that the engines begin to work unstable primarily in desert conditions, when sand particles rise into the air and EAPS filtering does not provide protection for power plants. Moreover, emergency situations often arose outside desert conditions. The rotation of the tiltrotor screws leads to the appearance of dust in the air, which may ultimately affect the operation of the engines - they overheat and begin to malfunction.

In the USA, they note that for ten years this is the third attempt to redesign the filters and provide reliable engine protection.
The Drive publication on this occasion writes:

There are fears that the Navy and the US Air Force will again be unable to guarantee that all recent efforts will adequately reduce the risks of sucking a dangerous amount of particulate matter into V-22 engines, especially when working in desert conditions.
The US Department of Defense Inspector General noted that so far no attempt to improve EAPS has led to the desired result.

The third EAPS upgrade is designed to remove more dust from the air entering the V ‑ 22 engine than the original version of EAPS; however, the amount of dust entering the engine will still be about four times higher than what the Rolls-Royce T406 (AE 1107C-Liberty) engine specification can withstand. As a result, the V-22 remains at risk, despite more than nine years of trying to redesign the filter system.
The problem of filtering and general accident convertiplane in the report is recognized as unresolved.

The case in Nepal is being considered when the US military tried to help after the earthquake using tiltrotors. As a result, the Americans for a long time could not figure out where to land their convertiplanes. Firstly, during landing, they lifted hundreds of kilograms of garbage and dust into the air, and secondly, the operation of the screws literally blew away the shaky buildings that remained after the earthquake, which led to new blockages.