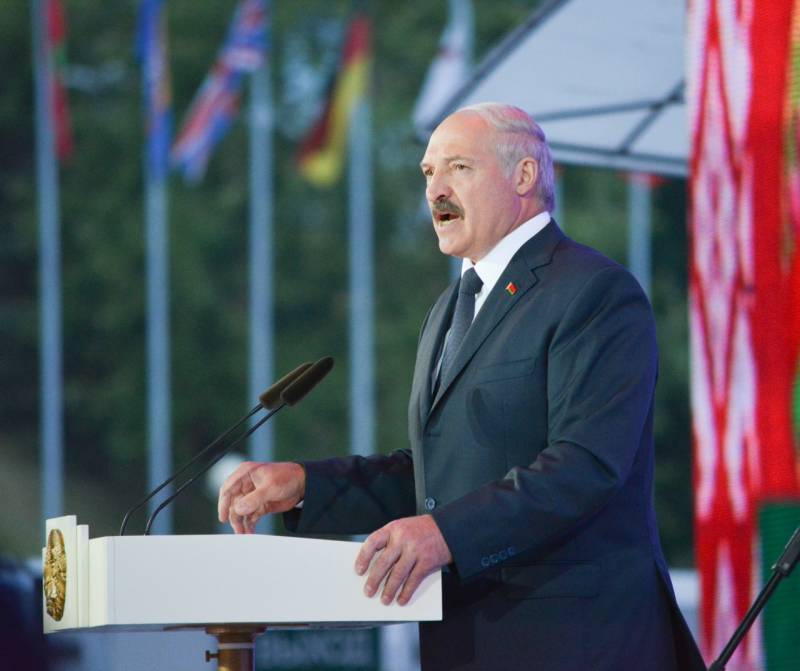 What we created 20 years ago

Few in Russia remember that very soon, on 8 of December of this year, a rather serious date will be celebrated in Russia and Belarus - the twentieth anniversary of the creation of the Union State. History the creation of this supranational entity is quite complicated. I will not describe all the events that took place over these 20 years and odd years. The story is complex and interesting.

In short, the Union State of Russia and Belarus is an attempt to create some kind of new formation of two independent states with a single political, economic, military, customs, currency legal, humanitarian and cultural space. An attempt to unite the fraternal Slavic peoples again. An attempt on the example of two states to push the third fraternal state - Ukraine - to unite.

What happened and what has not worked out so far in this attempt is a difficult question. This is a topic of quite a long discussion. But what events take place in connection with the approach of this date in a fraternal country is interesting. Moreover, in various media, up to the official government channels of electronic media, more and more often quite provocative materials appear.

Strange words "misunderstood" by us

Then President Lukashenko in an interview with Kazakh television will suddenly say that all the wars in which Belarusians participated are other people's wars and the neighbors are to blame for unleashing them. Directly referring to Russia. Why does it mean that I, as the grandson of the partisan of the Great Patriotic War, who beat the fascists in Belarus, just turns me on.

I knew my grandfather personally. And I know the history of their squad. It was my grandfather’s personal war against fascism! Then, a year later, a senior lieutenant from Moscow, the future chief of staff of the detachment and a sergeant-radio operator appeared. And my grandmother was shot precisely for this reason.

It was a war of Belarusians for their own land, for their own life. Like the war of all other peoples of the USSR. They fought for their small homeland, which was part of one large, common homeland for all.

That is, at the level of chief editors of very serious Belarusian publications, they talk about threats to Belarus from Russia on state television. Notice the threats! We are threatening Belarus.

That high-level statesman, Minister of Foreign Affairs of the Republic Vladimir Makei directly accuses Russia of all mortal sins. which causes a rash in all those involved in international affairs.

What is happening in Belarus? Why does President Lukashenko make a clearly provocative statement about the war, and then his spokesman accuses Russian Prime Minister Dmitry Medvedev of “taking words out of context”? Why are there more and more calls on the Belarusian Internet to “put the presumptuous Russians in their place”?

What really happens in the information space of Belarus

Let's try to look at the situation without emotions and no offense. Just with the cold pragmatism of people from the outside. I apologize in advance for some associations and comparisons. The author’s cold head and lack of emotion does not imply a lack of emotion among readers.

In 1972, a movie on the then fashionable production theme was released on the screens of Soviet cinemas. It was called epic enough: "Man in his place." The film is about a young engineer who returned after graduating from the institute and working at the factory to his village and offered himself to the collective farm chairmen. The film is good, kind.

What am I in a serious article that I remembered the movie? Yes, simply because upon careful consideration, the algorithm of the hero Vladimir Menshov’s work (actor’s debut), collective farm chairman Semyon Bobrov, and Belarusian President Alexander Lukashenko coincide to the smallest detail. And the role of a large and rich Russia is played by the hero of Armen Dzhigarkhanyan Artashes Kocharyan, director of the chemical plant.

Resist a chemical plant that can pay a large salary, can send a worker to study at a university, can simply provide a more comfortable life, Bobrov cannot. Therefore, he uses the director Kocharyan to solve his own problems. Where flattery, where direct blackmail, where reasoned calculations about mutual benefit, but uses. What is not Alexander Grigorievich?

Over the years, we have seen everything. And flattery, and blackmail, and seemingly random reservations, an example of which I cited above. All in order to save the "collective farm". To be at least equal in official papers with the "director of the chemical plant." The task of Lukashenko, as I see it, consists in this. Save Belarus in the status of an independent and independent state.

The first years after the creation of the Union State can be described as years of rapid growth and development. It is clear that President Lukashenko, realizing that Belarus is too small among the three Slavic republics, tried to get ahead of Ukraine and become Russia's best and most loyal friend. Equal to Ukraine, at least.

However, over time, it became clear that Ukraine is choosing a different path of development. Moreover, this did not happen during the last Maidan, but much earlier. The “collective farm chairman” realized that the “chemical plant” in the Union State had only one ally - Belarus. And you can ask “Kocharyan” anything. “Kocharyan” will already give so that the chairman of the neighboring collective farm sees how good it is to be friends with the “chemical plant”.

Of course, it is difficult to imagine that President Lukashenko played so “for a long time.” With all my good attitude towards this leader, it is difficult to suspect him of foresight. But then the question arises of the divergence of approaches to the Union State in Moscow and Minsk. Why has the transformation of views on SG already become apparent to everyone today?

We are just building a different Union State

It seems to me that the whole point is in the terms that we, Russians, and they, Belarusians, use. What is the Union State in Russian? I'm not talking about intermediate periods of formation, but about the outcome. About what should happen at the finish of this process. Any work, and the creation of the SG is a serious and difficult work of many people from both countries, must end with some kind of result.

So, the Union State in Russian is a single confederate state, with a single leadership and all the attributes of the state. To put it even easier, Belarus will have to become another constituent entity of the Russian Federation with a special status. A sort of Finland in the Russian Empire.

From the point of view of Belarus, the Union State is the newest form of supranational formation in which two or more states coexist and which conduct independent domestic and foreign policies. Moreover, the main word here is "independent." And this implies some consultation on foreign policy and the economy. Some benefits in some issues.

Remember the claims of Belarusians about our military operation in Syria? Regarding our assistance to the population of Donbass? And our "return" regarding fuel for Ukraine from Belarusian plants or MAZs with Ukrainian missile launchers in the Donbass?

Somehow, unobtrusively, inconspicuously for a simple layman, we began to count our money, which we spent on supporting Belarus. We are quite seriously talking about the tens of millions that Belarusians received during the “customs clearance” of our oil or our gas. We speak as a huge loss for our country.

Is the opposition so strong in Belarus and the opponents of the SG in Russia?

Today, the opposition in Belarus is raising its head higher and higher. More and more voices are heard in favor of the fact that the republic should go its own way. Not in the wake of Russia, but on its own. Encouraged by success in Ukraine, Western intelligence agencies are pouring huge amounts of money into the Belarusian opposition.

The usual scenario for post-Soviet countries is being played. National idea and national state. Independence from Russia and joining a friendly family of European nations. The West does not offer anything new for Belarusians in the hope that the Russian chance will work.

By the way, our liberals have intensified in the same way. The “accountants" that I mentioned above appeared from their submission. And the revisionists who, with a microscope, examine all the evidence of Belarusian officials, too. We are being pushed persistently to the idea that we contain a parasite. “We invest in them, and they are like Ukraine or the countries of the socialist community” ...

Relations between Russia and Belarus cannot be simple by definition. Although we are mentally close, fraternal countries, we are different. And the tasks of the leadership of our countries are similar. Improve people's lives and increase the country's political weight in world politics. This can be done only when it becomes possible to “tear out a piece” from others. Only here countries, I repeat, are different.

It seems to me that all these statements by opponents of the united state, which, as seasonal exacerbations of mentally ill people, periodically arise in the spring and autumn of each year in both states, are just on-duty testing of events for overseas sponsors of the “fighters for the happiness of the people” of Russia and Belarus.

How will we celebrate the round date

I think that new treaties, roadmaps and other intergovernmental agreements will nevertheless be signed at the celebration of the 20 anniversary of the Union State. Moreover, both presidents are already aware of the basic ideas of future documents and supported their signing. And the contradictions, which today are strongly promoted by the Belarusian media and heated by the opposition, will be quickly localized by the KGB of the republic.

I will return to the story of the film. More precisely, to one episode. A conversation between the chairman of the collective farm Bobrov and the director of the chemical plant Kocharyan on the construction of the road. When Bobrov is blackmailing Kocharyan in plain text.

“We will drag you through the courts because of the alienation of our land. Yes, we will eventually lose. But we still get our money. And you will lose time. ”

All the commotion, all the turbidity that has surfaced today in the press and speeches of politicians is nothing more than a conversation between Bobrov and Kocharyan at the level of the leaders of Russia and Belarus. Lukashenko today needs to adopt a more or less balanced budget. But in connection with Russia's actions in the field of oil and gas trade, Minsk’s profit fell sharply.

To meet the needs it is urgently necessary to “find” 500 million. This money used to come from nothing by “customs clearing” Russian oil or by selling products of cheap oil processing. In fact, Russia did not “notice” these manipulations with money. And suddenly, after very arrogant statements by some Belarusian politicians, she noticed and closed the shop.

Time will pass. The government will find a way out, that is, money. Most likely, the money will again be Russian. There will again be talk of friendship and the desire for integration. And again the cart gets stuck in some kind of pothole. In my opinion, in the near future the creation of a single state will not be legalized. For the simple reason that is described above.