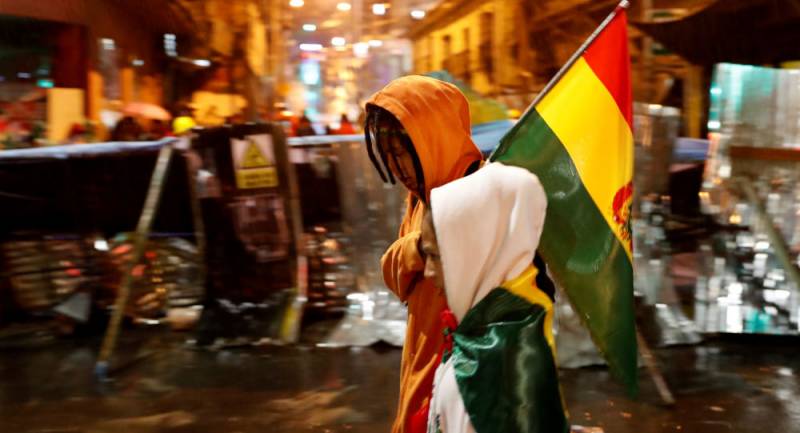 Unrest in Bolivia caused by a coup d'etat. President Evo Morales fled to Mexico, with a Mexican military plane arriving for him. What caused the turbulent events in this Latin American country and what could be the consequences?

Evo Morales can be called one of the last charismatic leaders of Latin America after the death of Fidel Castro and Hugo Chavez. A native of the people, an adherent of the fancifully combined ideas of socialism and Native American nationalism, Evo Morales ruled Bolivia for 13 years, from January 2006 to November 2019.

Bolivia is an unsuccessful country for the left. Half a century ago, Ernesto Che Guevara was killed here, and nowadays, they almost dealt with Evo Morales. There is no doubt that the opposition would kill the president if he fell into her hands - his house was plundered and destroyed, even the walls were broken, raging in fierce hatred of the head of state.

As the main reason for the mass protests, the opposition called the falsification of the elections, allegedly taking place on October 20. In fact, people could have no doubt in supporting Morales. It is clear that not all Bolivians are for Morales, but in the countryside where the poorest peasant communities are concentrated, he enjoys unequivocal support among the proletariat. 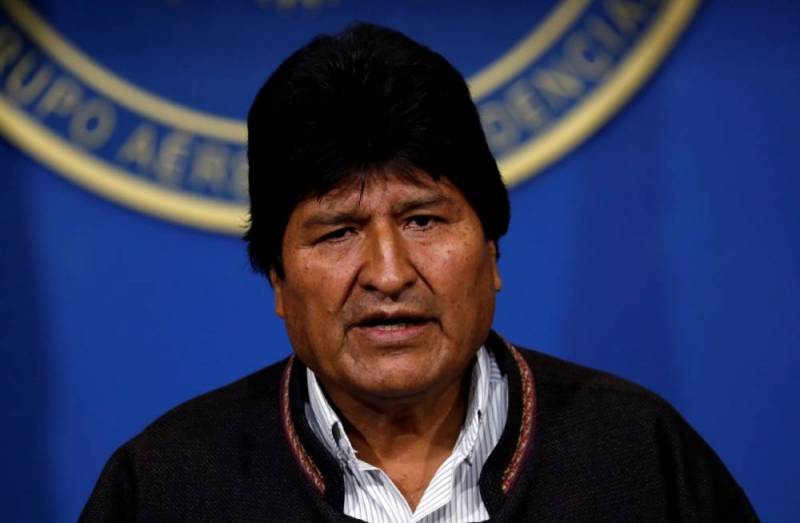 By the way, under Morales, the real standard of living in Bolivia only increased. He did not build a paradise on earth, but poverty in the country decreased by 23% over thirteen years, and that’s something, yes. In the social sphere, the Morales government has also done very, very much.

Keep in mind that Bolivia is one of the poorest and most backward countries in Latin America. Most of the country's population is composed of Indians and Mestizos, among whom, until recently, there was a very high level of illiteracy. And his Morales also managed to reduce - from 13,3% in 2006 year to 2,4% in 2018 year. Morales took very substantial measures to support peasant producers of agricultural products.

However, the opposition, rallied around the former owner of the channel, a representative of the Bolivian elite Carlos Mesa, Morales socialist transformation caused a natural hatred. Mesa is an ardent supporter of privatization, private property, and liberal values. He is the opposite of Morales. If Morales is a “guy from the people”, then Mesa is an intellectual, journalist and historian. By the way, he became Director of the Bolivian Film Fund in the distant 1975 year, at the age of only 22 years. 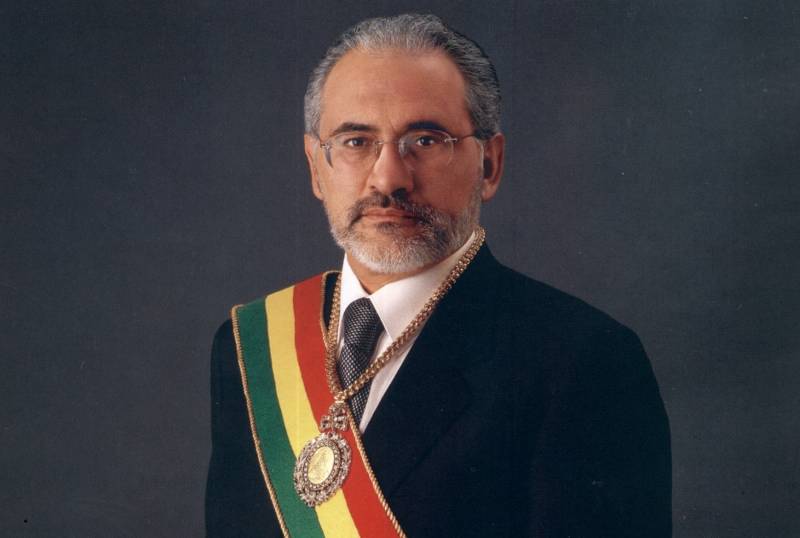 For Mesa, the main declared task is to achieve "stabilization of the economy." At the same time, the social conquests of Morales have no meaning for him. As much as he would care about Mesa’s words about the Bolivian people, in reality he is deeply alien to both happiness and grief of ordinary Bolivians, unlike Morales, who in the 22 of the year did not head film funds, but served as a military musician, and then worked on plantations in a mountainous region Chapare.

Treason of the military and complete chaos in the country

The resignation of Morales became a reality primarily because the army betrayed the president. Unlike Venezuela, where, with the exception of a few traitors, the armed forces completely supported Nicholas Maduro, in Bolivia, for the thirteen years of Morales’s rule, he was unable to reformat the army and change the minds of the officer corps. As a result, the top of the country's armed forces solidified with the opposition. Indeed, many Bolivian high-ranking military men are closely connected with representatives of the country's large capital and the United States. 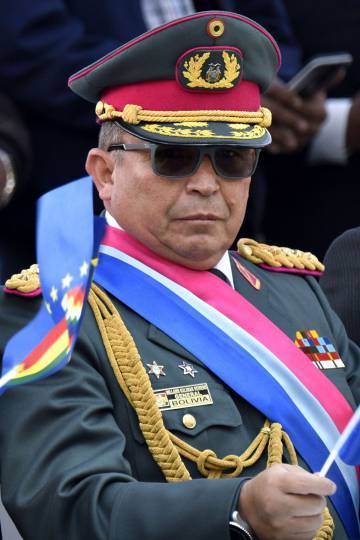 It was the commander-in-chief of the Bolivian army, Army General Williams Kaliman Romero, who demanded that Evo Morales vacate the post of president of the country in order to stabilize the situation in Bolivia. And the president, realizing that the army would not support him, agreed with this demand. The police even earlier refused to support the incumbent head of state. Although the head of the national police, Yuri Calderon, denies that he was planning to detain the incumbent president, nevertheless, the leadership of the country's Central Election Commission was detained by police at the request of the prosecutor's office.

Moreover, General Caliman Romero stated that the army would discourage any attempt to suppress protests against Evo Morales. That is, in fact, the armed forces, where the right-wing sentiments were traditionally strong, demonstrated their readiness to oppose the current president.

For this, the Bolivian military elite has already received praise from US President Donald Trump. Of course, the American president will not say such kind words about Venezuelan generals and officers - despite the repeated calls of Washington, they never betrayed their supreme commander-in-chief Nicolas Maduro.

By the way, President Evo Morales announced his resignation just a few hours after he agreed to hold new elections. He showed an enviable humanism, abandoning the opposition to force, although he, of course, also had supporters in the army and the police, and in the event of armed clashes, the country would plunge into the abyss of civil war. He called on his opponents for a peaceful dialogue, and then completely decided to resign as president to prevent further escalation of violence in the republic.

However, in addition to Morales, the vice president of the country Alvaro Garcia Linera, the chairman of the upper house of parliament Adriana Salvierra, the head of the lower house of the parliament Victor Borda left their posts. In fact, anarchy came to Bolivia, the authorities were simply paralyzed. Formally, the interim head of state is now Janine Agnes Chavez, the second vice speaker of the Senate, who remained the oldest among the highest civil servants in Bolivia who did not resign from their posts following Evo Morales.

Political chaos immediately led to the most catastrophic consequences for national security and public order. On the streets of Bolivian cities, gangs of robbers and hooligans rage, who, under the guise of fighting the “damned past”, are robbing shops, houses and apartments. In principle, the Bolivian marginals are doing the right thing by stocking up on food and clothing, money and household appliances, since the social state will be curtailed after Morales leaves the presidency, which means that the scale of assistance to disadvantaged sections of the population will decrease significantly. 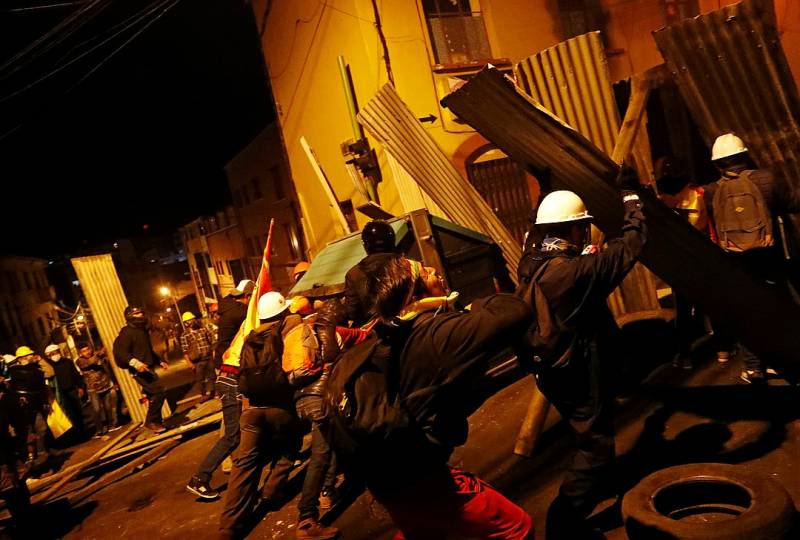 The police can not cope with street crowds, and therefore called for help from the army. However, the military continues to claim that it will not open fire on civilians. And “peaceful people,” meanwhile, are smashing police stations, turning over police cars. The heads of the police stations, not wanting the death of their subordinates, dismiss them home.

Acting head of state Jeanine Chavez even burst into tears at a public speech, saying that Bolivia did not deserve such a fate. All day, the whole world has been watching a nightmare taking place in this Latin American country, which convinces us all that a thin world is better than such a “people's revolution” in the name of some ghostly slogans.

Peace and the resignation of Morales

Naturally, the United States took the events in Bolivia as its victory: Evo Morales was one of the most uncomfortable Latin American leaders for Washington. He hated American imperialism, repeatedly stated this, pursued a socialist policy, but, most importantly, was friendly with Russia and China.

More recently, Evo Morales came to our country to meet with Russian leaders and discuss, among other things, the supply of Russian military equipment for the needs of the Bolivian army.

Therefore, it is not surprising that the American president rejoiced at the overthrow of Morales. Trump said the Bolivian coup is an occasion to reflect on the leaders of Nicaragua and Venezuela.

These events are an important signal to the illegitimate regimes in Venezuela and Nicaragua that democracy and the will of the people will always triumph. Now we are one step closer to an absolutely democratic, prosperous and free Western hemisphere,
- emphasized the US president.

Latin American countries divided. In Cuba, Nicaragua, Venezuela, the overthrow of Evo Morales was unambiguously regarded as a coup d'etat, and Argentina holds the same position. Nicolas Maduro, the president of Venezuela, called Morales his brother and stated that the indigenous peoples of Bolivia had been the victim of racism. A decisive protest against the coup in Bolivia was also expressed in Cuba.

In Colombia, Peru and Guatemala they only stated the need for the speediest restoration of order and democracy in the country. European countries, which, of course, are in reality more likely in solidarity with the United States, have made the same duty statements. At the same time, leftist forces in a number of European countries regret the departure of Morales, as the charismatic Bolivian president aroused the sympathy of many leftists around the world.

Mexican Foreign Minister Marcelo Ebrard said his country was ready to give Evo Morales political asylum. Mexico sent a military plane for Evo Morales, on which the former Bolivian president flew to a hospitable country. It is still unknown whether Bolivian law enforcement agencies will try to persecute the former president of the country or whether his opponents will be satisfied with the expulsion of Morales from the territory of Bolivia. 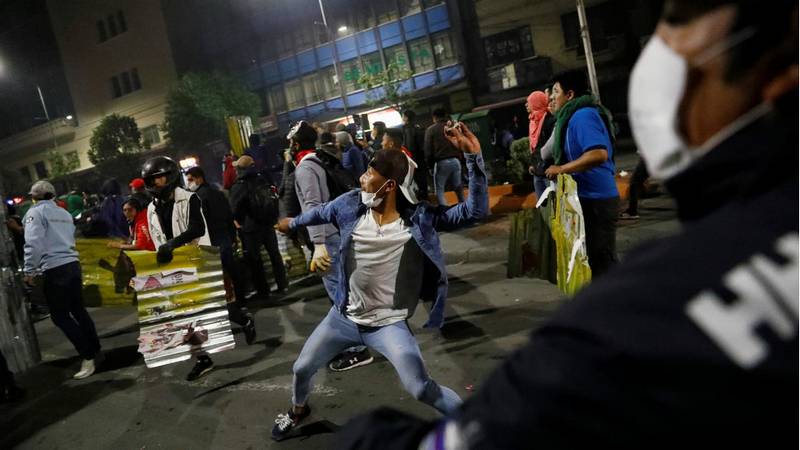 It is likely that the former head of state will be given the opportunity to live quietly in Mexico, if only he would not disturb the Bolivians. Although, on the other hand, while Morales is alive or, at least, is at large, he remains a symbol of the Bolivian socialist movement and poses a significant danger to those forces that will replace him.

It is clear that in the foreseeable future, mass protests in Bolivia will gradually subside. But what's next? If the country is headed by Carlos Mesa, then over time all the social gains of Evo Morales will be curtailed. And the people of one of the poorest countries in Latin America will return to that familiar position from which one of the last left-wing romantics of the New World tried to pull him out for thirteen years.