Published footage with the attacker in the kindergarten "Tale" Naryan-Mar

November 5, 2019
116
The Investigative Committee of Russia published a video from October 31 of the current year with a captured man who is the main suspect in the attack on the kindergarten of the city of Naryan-Mar and the killing of an 6-year-old boy. 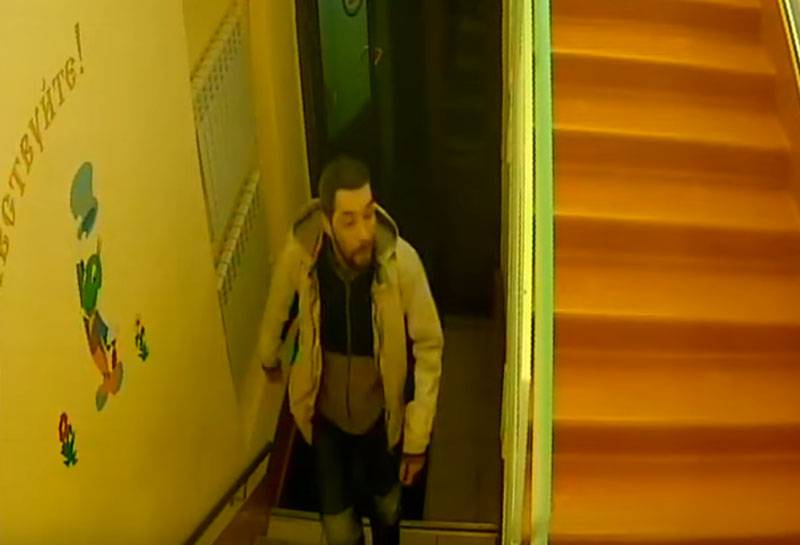 We are talking about the 36-year-old Denis Pozdeev, who, reportedly, admitted his guilt during the investigation. This is the same person who, after the arrest, stated that he had read a certain book in which "they promised eternal life." Police officers tried to find out from the detainee what book was in question.

The footage shows how a man approaches the entrance to the Fairy Tale kindergarten during the day, tries to enter, but the door is locked. Then he rings the intercom and the door is opened to him. Investigators in the Arkhangelsk region and the Nenets Autonomous Okrug found out that the guard did not even leave his premises and opened the door of the kindergarten remotely to an unknown man. The guard himself stated the following:

Thought it was one of the parents.
Further on the frames from CCTV cameras it is seen how an attacker rises to the second floor, looking for a door that “needs to be entered”.
Law enforcers say that one of the teachers tried to block the entrance to the children's restroom, but this did not stop the attacker.

The video shows how an attacker is taken out of the building of a kindergarten by police officers. The investigating authorities say that while the offender was in the children's rest room, the second teacher ran to call for help. One of the employees of the preschool institution pressed the “panic button”. The same guard began to rise to the second floor, and he opened the door to the stranger. But while all this was happening, the attacker had already inflicted a fatal stab wound on the boy.

He (the suspect) explained to the investigator that on the eve of the indicated events he used alcohol. A stationary complex psychological and psychiatric examination has been assigned to the accused. It has been preliminary established that the accused is not convicted; he was previously under the supervision of a psychiatrist-narcologist in connection with alcohol addiction. He lived alone. The place of residence is characterized by mediocre, silent, secretive, did not communicate with anyone.
A criminal case was also instituted against an employee of OP Svyatogor LLC, who opened the door to an attacker. The guard partially pleaded guilty. A criminal case has also been instituted on the fact of negligence of officials of the Kindergarten “Fairy Tale”.

The video also shows investigative actions with the accused in the kindergarten building.