From a fake coin to a fake story. Who actually liberated and created Ukraine

November 1, 2019
63
In Ukraine, falsification continues at the state level stories Little Russia (parts of a single Russian civilization). The National Bank of Ukraine issued a jubilee coin dedicated to the 75 anniversary of the liberation of the country from Nazi invaders depicting a fighter of the Ukrainian Insurgent Army (UPA, banned in Russia). 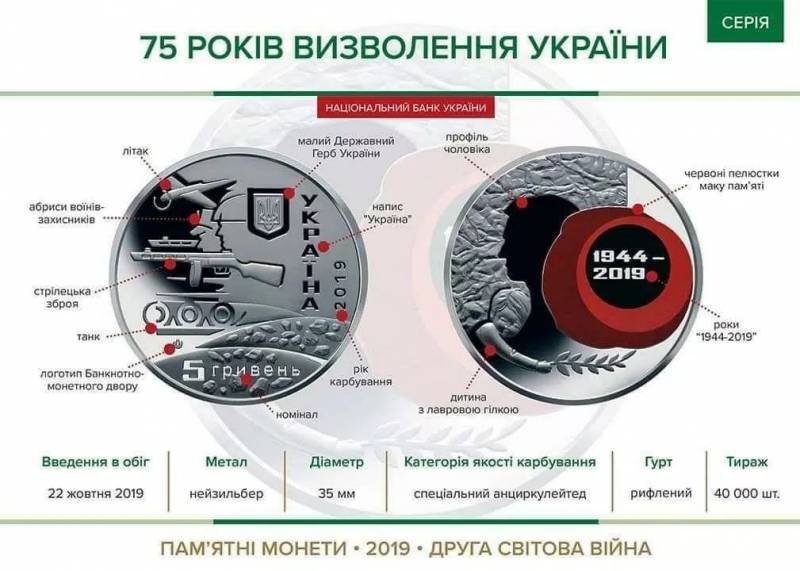 “Dedicated to the memory of the heroic deed of the Ukrainian people in World War II, the liberation of Ukraine from the Nazi occupiers in the fall of 1944, the memory and reconciliation of the soldiers who gave their lives for Ukraine,”
- it is reported in the description on the website of the Ukrainian National Bank.

Day of the liberation of Ukraine from the Nazis

This year, on the 75 anniversary of the liberation of Ukraine, the state holiday was again remembered. And within the framework of the general falsification of the history of Russia-Russia and its integral part of Little Russia (Little Russia-Ukraine), they issued a jubilee coin, on which the profiles of the fighter of the Red Army and the fighter of the Ukrainian rebel army were depicted.

Thus, in Kiev at the state level they distort the true history of the Great Patriotic War. This is not surprising. If before 2014, Kiev politicians had a “flexible” policy and sat on several “chairs” —the USA, the European Union, and Russia, then the situation changed radically. Outspoken Russophobes, oligarchic thieves who continued to chew on this part of the Russian world, and Ukrainian Nazis, who became the political cover for the final utilization of Little Russia in the interests of the "world community", took up. Now Russia is the "enemy", Russians are the "invaders." And in Little Russia there are no Russian-Ukrainians (the southwestern part of the Russian ethnic group), only “Ukrainians”, direct descendants of the Rus of Kievan Rus, in Russia, “Muscovites”, descendants of the Finno-Ugric and Mongols with an admixture of Slavism. At the same time, Russia is still an economic donor of “independent” Ukraine.

The official date for the liberation of Ukraine from the Nazis is 28 October 1944 year. On this day, the East Carpathian strategic operation ended (8 of September - 28 of October 1944). The troops of the 1 and 4 th Ukrainian fronts under the command of I. S. Konev and I. E. Petrov were supposed to liberate Transcarpathian Ukraine (historical Carpathian or Ugric Rus) and support an anti-fascist uprising in Slovakia. Soviet troops were able to complete the liberation of the Ukrainian SSR. However, the Wehrmacht, trying at all costs to keep Slovakia and Transylvania, threw large reinforcements into this area, moreover, the Germans relied on mountain fortifications and were able to stop the Soviet offensive.

Thus, the Red Army was unable at the first attempt to force the Carpathians and liberate Slovakia. The Germans crushed the Slovak uprising, the remaining rebels switched to guerrilla warfare. The Soviet command stopped the offensive. However, Soviet troops completed the liberation of Ukraine and created a bridgehead for the further offensive.

Who liberated the USSR

The Red Army liberated Ukraine-Little Russia. The battles for Little Russia began in the winter of 1943. The battle for Ukraine lasted until October 1944. At that time, up to half of the forces of the Red Army fought in the Ukrainian direction. The victory at Stalingrad escalated into a general strategic offensive by the Soviet troops. In the southern direction, Soviet troops attacked the Donbass Wehrmacht. In the first half of February 1943, the South-Western Front liberated the northeastern part of Donbass. Our troops liberated Balakliya, Raisins, Lozovaya, Slavyansk, Kramatorsk and hundreds of other settlements. Also in February Kharkov was liberated. However, the Soviet command overestimated its strength, preparing to attack Kiev and Chernigov, and underestimated the enemy, believing that the Nazis were retreating beyond the Dnieper. In winter, the Germans were able to organize powerful counterattacks on the Red Army and in March repelled Kharkov.

A new powerful offensive in Ukraine began after the defeat of the Wehrmacht in the Battle of Kursk. The Red Army again seized the strategic initiative, first liberated the Left-Bank Ukraine, and then the Right-Bank. The Belgorod-Kharkov strategic offensive operation (“Rumyantsev”) in August 1943 led to the liberation of Belgorod and Kharkov, created the conditions for the liberation of the eastern part of Little Russia-Ukraine. The Central, Voronezh, Steppe, South-Western and Southern Fronts were tasked with defeating the Wehrmacht on the southern wing of the Soviet-German front, liberate the Left-Bank Ukraine, Donbass and Crimea, go to the Dnieper and seize bridgeheads on its right bank.

At the end of the 1943 year - the beginning of the 1944 year, the Red Army began the liberation of Right-Bank Ukraine. The Dnieper-Carpathian strategic operation began (24 December 1943 g. - 17 April 1944 g.). During the Zhytomyr-Berdichev operation, the troops of the 1-th Ukrainian Front on 31 on December 1943 released Zhitomir, on 3 on January 1944 on Novograd-Volynsky, on January 5 on Berdichev. On January 5 of 1944, the 2th Ukrainian Front went on the offensive; Kirovograd was liberated on January 8. 24 of January - 17 of February The 1 and 2 UV fronts carried out an operation to destroy the enemy Korsun-Shevchenko group. The German group was surrounded and defeated, our troops liberated Kanev and Korsun-Shevchenkovsky. At the same time, the troops of the right wing of the 1-th Ukrainian Front carried out the Rivne-Lutsk operation, liberated Lutsk, Rivne and Shepetovka. In February 1944, the troops of the 3 and 4 th Ukrainian fronts defeated the Wehrmacht Nikopol-Kryvyi Rih group, destroyed the enemy Nikopol bridgehead on the Dnieper, liberated Nikopol and Kryvyi Rih. Thus, the Red Army finally threw back the Germans from the Dnieper.

In the spring of 1944, our troops continued their strategic offensive. During the Proskurov-Chernivtsi offensive operation (March 4 - April 17 1944 of the year), the troops of the 1-th Ukrainian Front liberated a significant part of the Right-Bank Ukraine: the entire Khmelnytsky region, the vast majority of the Vinnitsa, Ternopol and Chernivtsi regions, partially - the Rivne and Ivano-Frankivsk regions . Soviet troops captured the German Army Group "South" from the west and reached the foothills of the Carpathians. At the same time, the troops of the 2-th Ukrainian Front carried out the Uman-Botoshan operation, split the enemy front, forced the Southern Bug, Dniester, Prut, liberated the southwestern regions of Right-Bank Ukraine, part of the Moldavian SSR, crossed the state border of the USSR and entered Romania. The 3-th Ukrainian Front in March 1944 conducted the Bereznegovato-Snigirevskaya operation. Our troops defeated the 6-th German army, liberated a significant part of the territory of Little Russia. At the end of March - April, 1944, the 3 UV carried out the Odessa operation, the Soviet troops 28 liberated Nikolaev in March, 10 stormed Odessa in April, and on April 14 reached the lower Dniester and captured several bridgeheads on its right bank. As a result, Soviet troops liberated the Nikolaev and Odessa regions and a significant part of Moldova. The conditions were created for the complete liberation of Moldova, advancement into the depths of Romania and the Balkan Peninsula.

In the summer and fall of 1944, the Red Army completed the liberation of Ukraine. During the Lviv-Sandomierz offensive operation (from 13 July to 29 August 1944 years, Soviet troops defeated the enemy’s strategic group - Army Group Northern Ukraine, liberated the western regions of Ukraine - the cities of Lviv and Rava-Russkaya from the Nazis. Completed the liberation of Little Russia East Carpathian operation (September 8 — October 28 October 1944 years): October 26 troops of the 4 Ukrainian Front liberated Mukachevo, October 27 Uzhgorod, October 28 Chop. As a result, October 28 October 1944 Soviet troops went to modern Ukraine will flee.

Thus, Soviet troops liberated Ukraine. According to the census of 1939, the overwhelming majority of the population of the USSR were Russians (including Little Russians and Belarusians). It should be remembered that the Ukrainians and Belarusians, who in the Soviet years were singled out as separate nations, are in fact parts of a single Russian superethnos. Before the creation of Soviet Russia, there were no nations of Ukrainians and Belarusians. There were western and southwestern groups of the Russian people (Belarusians, Little Russians, Rusyns, etc.), which had their own regional, linguistic, and everyday features. Similar divisions were earlier among the Russians in the central part of the country - Ryazans, Tverichs, Novgorodians, Smolensk, etc., but in general they are all Russian-Russians. That is, they liberated the western part of a unified Russian civilization, Ukraine-Little Russia, and the Russians.

On the role of Bandera

The Ukrainian Insurgent Army (UPA) rather hindered the liberation of Ukraine than helped. Bandera led active guerrilla warfare against the Red Army. In particular, the commander of the 1-th Ukrainian Front N. Vatutin was killed at the hands of Ukrainian Nazis. Also, Bandera organized terror against sympathizers of the Soviet government and the Red Army, against the Polish population in the western part of the republic and Jews.

Moreover, individual units and units of Bandera fought on the side of the Nazis. So, the SS Galicia division formed in the summer of 1943 a year later was used by the Nazis in the battles of Brody, after the defeat of which the UPA replenished a significant part of it. And the remaining combat-ready units were aimed at suppressing the Slovak uprising. That is, the UPA was an ally of the Third Reich. With the help of Bandera, the Nazis tried to organize an anti-Soviet partisan movement in the rear of the Red Army. Later, when the Third Reich was already defeated, the Ukrainian Nazis entered the service of the United States and England and spent several more years fighting against the USSR. In the hands of Bandera the blood of thousands of people, including civilians, many crimes.

Thus, the diverse praise of the UPA in modern Ukraine is blasphemy. Many current Kiev politicians simply betrayed the memory of their grandfathers and great-grandfathers who beat the Nazis and Nazi evil.

The present Ukraine was created by the Bolsheviks and Stalin

In truth, the current Kiev regime should not be praised by the UPA, but by the Soviet government and Stalin personally. After all, it was the Soviet government that created modern Ukraine within its current borders. It was to Soviet leaders, including Stalin, that monuments should be erected, not Bandera and other ghouls.

If the Bolsheviks could not win the Civil War, or if they could not recapture New Russia and Little Russia, and the Ukrainian nationalists remained in Kiev, then Ukraine would be very miserable. Without Galicia and Volhynia, which Poland captured, without Bukovina and Carpathian Rus - they were captured by Romania and Czechoslovakia. Without the Donetsk-Kryvyi Rih Republic, with its capital in Kharkov, which included the territories of the Kharkov and Yekaterinoslav provinces (in its entirety), the Donetsk coal basin, part of the Kryvyi Rih of the Kherson province, part of the districts of the Tauride province. The Bolsheviks included this republic in the Ukrainian SSR, although there were no serious reasons for this.

In 1939 and after the victory in the Great War, Stalin included the West Russian lands - Galitskaya and Volyn, Carpathian Rus, Bukovina into the Ukrainian SSR. That is, thanks to the "cursed Moscow", the Soviet government and Stalin, we have present Ukraine. If in today's Kiev they want to free themselves from the "evil" of Soviet power, then Ukraine can be calmly and honestly reduced to five pre-revolutionary provinces - Kiev, Podolsk, Volyn, Poltava and Chernigov. In fact, this is the possession of the hetman Khmelnitsky, and the land claimed by the Central Council in the 1917 year. All other lands were conquered and annexed to Kiev by the Russians. The Russians recaptured the Northern Black Sea coast from the Turks and Crimean Tatars and created New Russia. Galicia (Lviv region) and Transcarpathia were recaptured from Western Europe by the Red Army.