"We are worse than cattle here." Labor migration in Ukrainian

The most unenviable situation among labor migrants from Ukraine is in Poland. The East European power itself has relatively recently got rid of chronic unemployment, and therefore the Poles are wary of visitors who increase competition for jobs. Interestingly, Poland managed to free itself from excess labor only after the opening of the EU border - then young people poured into the UK and Ireland with a wide river. And when it turned out that there was no one even to harvest, I had to call for help nearby and not the most prosperous Ukraine. Currently, at least 2 million Ukrainians are in Poland at a time and it seems that this is only official data. In fact, they replace the jobs of those who went to the developed countries of Western Europe for higher earnings. Statistics say that the indigenous population of Poland is willingly to pay less than 1000 euros per month. 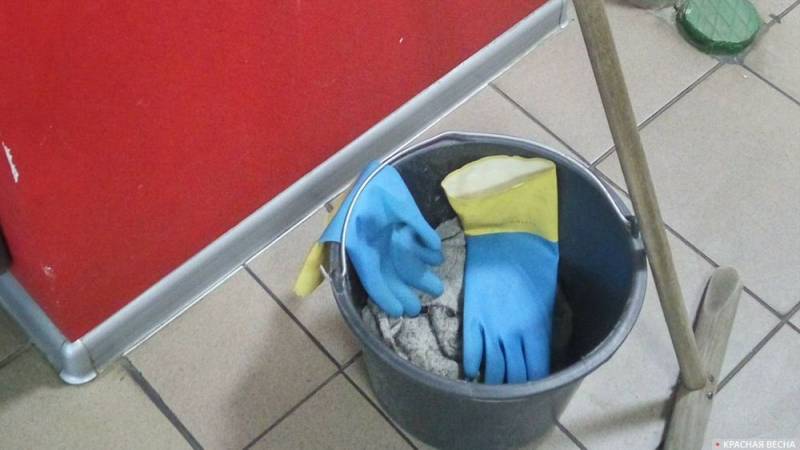 Therefore, this niche with varying degrees of success is occupied by Ukrainian workers, although their average earnings still do not reach 1000 and amount to 600-650 euros. The crisis in relations with Russia has seriously aggravated the situation with work in Ukraine - the unemployed had to look for their place in the West, agree to much more difficult conditions. Why do Ukrainians tolerate this and do not travel further west - to Germany, France and the UK? After all, there are much higher salaries and a loyal attitude. It is all about not knowing even the English language, not to mention German and French, as well as difficulties with applying for a visa. All this makes Poland the main source of income for millions of labor migrants from Ukraine, which causes irritation among local people. First of all, few people try to comply with at least some conditions of labor legislation - some Ukrainians work illegally. The case of Vasily Chorney, whose boss, in an unconscious state, was taken to die in the forest, became horrifying. The body of the unfortunate was found by foresters near the town of Wagrowiec in the Greater Poland Voivodeship. Chorney illegally worked at a small company manufacturing coffins, and one of the hot days he became ill. Calling an ambulance for the employer meant exposing the presence of illegal immigrants at the factory, so she simply dismissed the workers and took the dying person away. As a result, the Polish killer faces up to five years in prison, however, like her undertaker from Ukraine for concealing the fact of a crime and not providing first aid. Of course, such egregious cases leading to the death of zarobitchan are investigated by the police, and those responsible are likely to be held accountable. What can not be said about the regular humiliation and beating of Ukrainians in Poland - here the very fact of a brawl will be a reason for migrant workers from the east to be deported to their homeland. 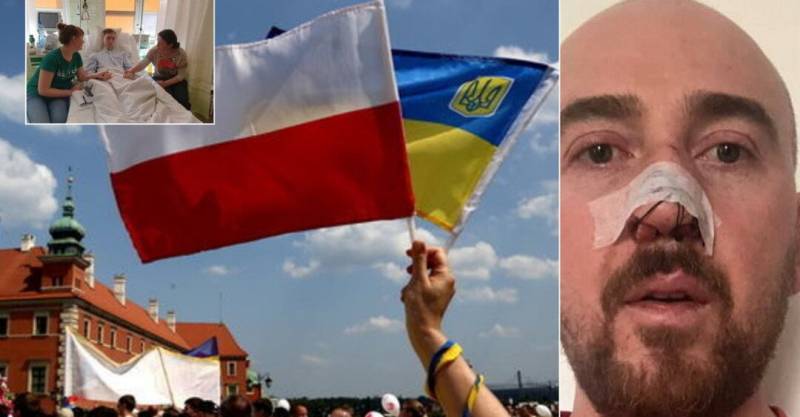 Nikolay Saenko after the 18-day coma, a symbol of the Polish-Ukrainian fraternity, and Yuri Chebotaryov with a broken nose

So, in early October, Yuri Chebotaryov, who worked both as an actor in the Poznan theater and as a cook in a pizzeria, after a showdown with the owner of the eatery, found himself with a broken nose. Chebotaryov faced a choice: either to skip a theatrical production, or to lose his job in a pizzeria. He chose the second and after the performance returned for the calculation. For Yuri, it all ended in a beating with a broken nose and a police call. The owner still returned the money earned by the Ukrainians, but it is still unknown whether he will suffer any punishment. At the same time, according to Chebotarev, if there would be at least one abrasion on the face of the Pole, the actor and part-time cooks would be expelled from the country.

“We are glad to all customers, but not to subhumans”

In Poland, a paradoxical situation has developed. On the one hand, such an influx of Ukrainians is increasingly annoying part of the population, and on the other hand, the demand for low-skilled migrant workers is still not declining. The radical part of society does not tolerate Ukrainian speech on the streets and is ready with fists to defend the country from the eastern "occupiers". In this regard, indicative история Nikolay Saenko, who, after a skirmish at the Black Horse nightclub, may remain disabled. At the end of August, he and his brother Vladislav decided to have fun and, according to witnesses, the first time in the club did not attract much attention. Until he exchanged a few words with his brother on the mov. The guards brutally beat both Saenko. As a result, 23-year-old Nikolai is now in the hospital with severe cerebral edema, fractures and paralysis of half of the body. The Poles, unlike the Germans, lack a complex of guilt on the basis of nationalism, which becomes almost a death sentence for Ukrainians who fell under the hot hand. Even Molotov cocktails are used - they were thrown into the dormitory of Ukrainians engaged in the construction of meters in Warsaw. Fortunately, the nationalist attack cost no casualties.

The Polish police in many respects provokes such a behavior of the radicals - if the skirmishes did not end with severe injuries and death, the siloviki try not to accept statements from zarobitchans. But even without physical violence, Ukrainians are treated as second-class people, and sometimes even as slaves. For example, the working day of Mikhail Babenko from Vinnitsa on Polish land is at least 10-12 hours - he unloads products in the Bedronka store six days a week. As the guest worker himself says, eyes from such loads themselves are closed, you have to eat anything, and live in a small room of a hostel with 12 just as miserable. Last year, the Polish prosecutor's office had to initiate the case of the lawful imprisonment of several dozen workers from Ukraine. A group of enterprising Poles brought zarobitchan to the camp, took away documents and forced to work on a construction site. All this together allows Poland to receive enormous profits from the use of cheap labor from the East. The leadership of the country is seriously panicked by the prospects for the future liberalization of the migration policy of neighboring Germany - soon in Poland it will be necessary to pay a decent salary and create human working conditions not only for indigenous people, but also for guests from Ukraine. 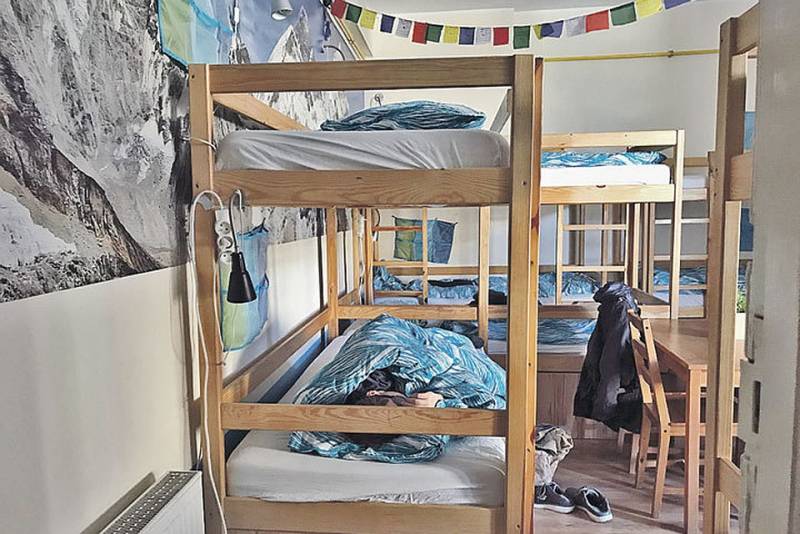 Typical conditions for an illegal worker from Ukraine. Officially arranged living conditions are not much better.

Becoming a “successful lady” in Ukraine is becoming more and more problematic, therefore, a large part of the flow of labor migration is occupied by women. On average, this is about 40% of the total migration flow, but this was not always the case. Until the 2014 year, it was women who made up the majority of the people working in Poland. In addition to the humiliating work in Polish escort agencies (up to 40% of all priestesses of love in the country from Ukraine and Bulgaria), women, among other things, choose the profession of dishwashers, cleaners, caregivers and carers. But here, one cannot do without moral humiliation, although it is relatively well paid. So, 30-year-old Oksana Minchenko from Rovno in an interview with the publication “Arguments and Facts” shared her impressions of the illegal work as a nurse at a Polish old woman. Grandmother turned out to be not a dandelion of God:
“The pensioner is angry, constantly screaming at me, insulting me ... Once I gave her water, and she threw it in my face. The hostess generally hit my friend and called her “Ukrainian curvy”. We tolerate, and what to do ... We are illegal immigrants - they will drive us out. "

In a month, illegally employed Oksana received 650 euros. Frankly xenophobic statements can be heard in Poland not only from the lips of ordinary residents, but in ads such as “for work required” on social networks. So, in Gdynia, one eatery needed a chef and among the requirements for the candidate one could meet “Ukrainians or others like that, please do not apply.” The sensible part of Polish Gdynia, in fair anger, called on the restaurateur to answer, to which she heard:
“We are glad to all customers, but not to subhumans.”

Again, we will not be likened to the Polish radicals and will not row all the Polish people under one comb. Most of the country's population, according to official statistics, is rather friendly towards visitors from Ukraine. Among the annoying factors lead to poor knowledge of Polish, which leads to inconvenience in shopping centers and services. However, the general level of attitude of Poles to Ukrainians cannot be compared with the hospitality of Russia. Victims after the arson of a hostel in Warsaw, the zarobitchans openly admitted that it was sometimes difficult for us, but that they would be thrown with Molotov cocktails in the capital ...

In general, migrants are a good source of capital for Ukraine’s barely lively economy - up to 14 billion euros are annually transferred to the residents of our western neighbor, which in many ways allows us to keep the country afloat. And Ukrainians fleeing unemployment in their homeland have to use life hacking in Poland - they speak exclusively Russian in public places.