October 24 2019
42
The U.S. Air Force received the first MRZR buggy with a combat laser installed on it, the main purpose of which is to defeat small drones. As transmits "NPlus1" With reference to the message of the manufacturing company Raytheon, the complex will be placed at one of the American bases abroad, where the trial operation will take place. 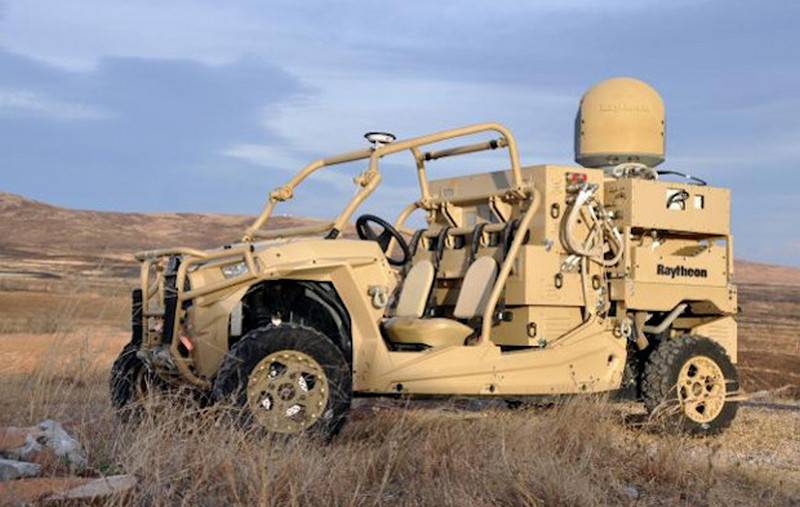 Raytheon handed over to the US Air Force the first combat laser mounted on the Polaris MRZR buggy chassis. According to the plans of the company, the complex. which will be placed at one of the foreign American military bases, pilot operation for effectiveness in the fight against small drones will be tested within one year. At the same time, training for laser system operators will take place.

The creation of a combat laser based on the Polaris MRZR buggy was reported back in March last year. During exercises conducted by the US Army at the test site of the Fort Sill base in Oklahoma, the buggy actively moved around the test site and fired with a laser at all detected "enemy" UAVs. In total, 12 drones were shot down with a laser.

Raytheon installed a MTS multispectral sighting station with optoelectronic and infrared cameras, as well as a laser module with an optical system, on the buggy. The power of the laser system is not specified. The buggy is equipped with a rechargeable battery, the full charge of which is enough for "several dozen laser shots." You can charge the battery from a household outlet.

The combat laser is capable of shooting down drones of the first and second classes. First-class vehicles include drones weighing up to nine kilograms, capable of flying at altitudes up to 365 meters at speeds of up to one hundred knots (about 185 kilometers per hour). The second class includes devices weighing from 9 to 25 kilograms, capable of flying at an altitude of up to one thousand meters.

Ctrl Enter
Noticed oshЫbku Highlight text and press. Ctrl + Enter
We are
Cheap and angry. Buggy with the installation of Spike NLOS ATGM was presented in IsraelUS Army tested Buggy with Anti-Awl Laser
42 comments
Information
Dear reader, to leave comments on the publication, you must to register.