The last "Hornet" US Navy made its farewell flight

October 9 2019
42
The U.S. naval forces finally said goodbye to F / A-18C Hornet fighters, completely switching to using F / A-18F Super Hornet fighters. As reported "Warspot" referring to the portal navaltoday.com, the ceremony of withdrawal of the last fighter of this brand from the US Navy was held at the Oceana air base in Virginia. 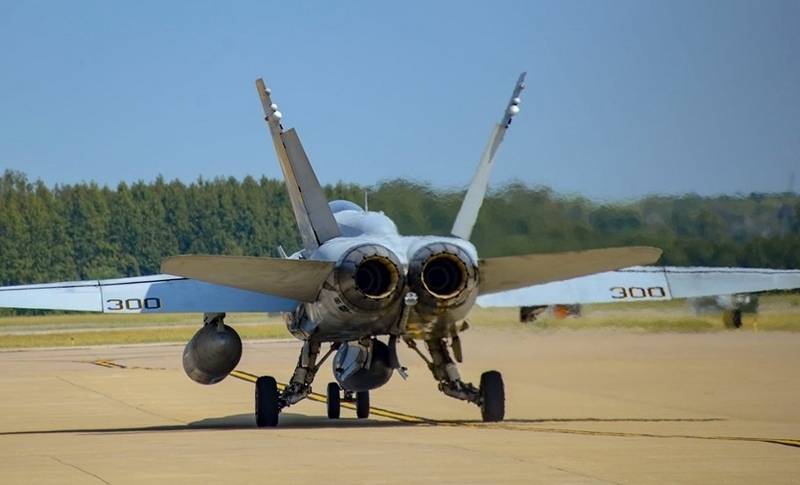 Latest F / A-18C American Hornet fleethaving tail number 300 is finally written off. The plane was part of the 106th fighter squadron (106 Strike Fighter Squadron), based in Cecil Field in Florida, but the farewell ceremony took place at the Oceana Air Force Base in Virginia. The F / A-18C Hornet fighter in the air made the last lap over the air base, accompanied by three F / A-18F Super Hornets, after which it was decommissioned. According to the U.S. Navy, this fighter made its first flight on October 14, 1988. The last-flight pilot, Lieutenant Andrew Jalali, was also born in 1988. Thus, the F / A-18C Hornet fighter was no longer in the US Navy.

Despite the fact that the American fleet got rid of the obsolete Hornets, replacing them with a modernized version, they are not going to completely abandon the aircraft. These aircraft are removed only from the combat units of the US Navy, but remain in service with the reserve. In addition, the US Marine Corps, which is also armed with the F / A-18C Hornet, has no plans to replace them with another model, and even ordered their deep modernization, during which the aircraft will receive radar with AFAR.

The F / A-18C Hornet, an American carrier-based fighter-bomber and attack aircraft developed in the 1970's, was the main aircraft of the U.S. Navy until the end of the 90's of the last century, when the US Navy began to receive a deeply modernized version of the F / F A-18, better known as Super Hornet. The final decision to write off the Hornets from the US Navy was made earlier this year, and the fighter withdrawal ceremony began on February 1. However, several aircraft have continued to fly to date.

We are in Yandex Zen
The US Navy announced the cancellation of the latest carrier-based fighter F / A-18C Hornet
F / A-18C Hornet US Marine Corps will receive radar with AFAR
42 comments
Information
Dear reader, to leave comments on the publication, you must to register.