October 6 2019
199
The US media believes that China’s attempt to copy the technology of carrier-based fighter aircraft for aircraft carriers, instead of acquiring them from Russia, came to China sideways. Aircraft developed on the basis of the Su-33 prototype purchased from Ukraine turned out to be problematic and ineffective. 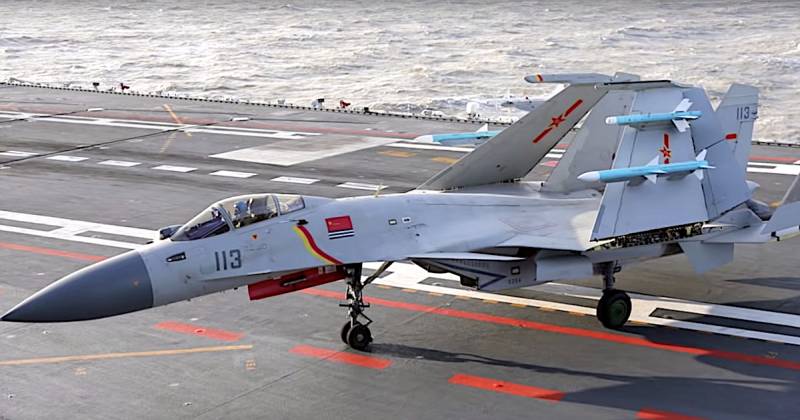 China is increasing its military power from year to year. However, despite the fact that the largest economy in the world is actively financing its army, money is not always the only thing needed to develop its own effective weapons systems. The attempt to save often turns out to be much more global spending for the state. And a good example of this is the J-15 Chinese carrier-based fighter project.

NI recalls that the J-15 is an unlicensed copy of the Russian (Soviet) Su-33 carrier fighter, which is a deck modification of the Su-27. China, wanting to save money, refused to buy Su-33 from Russia and purchased a prototype Su-33 T-10K-3 from Ukraine, and then redesigned it without acquiring documents for the use of technology.

The American edition of National Interest dissects the problems of the Chinese "decks", additionally drawing on a stinging article from the Sputnik news agency.

In Chinese circles, they rarely show love for the fourth-generation J-15 jet aircraft. The Asia Times notes that China’s media has been dismissive of the plane, including calling it a “floppy fish” for its inability to work effectively with a Chinese aircraft carrier (for now, Liaoning - VO note).

The main problem of J-15 is that at the moment they are forced to use Soviet technology and carry out a springboard start. J-15 engines and heavy weight seriously limit the effectiveness of the fighter: with an empty mass of 17,5 tons, it exceeds the weight usual for carrier-based fighters. The weight of the empty F-18, for comparison, is 14,5 t, Su-33 - 16 tons.

Unreliable and prone to accidents

J-15 turned out to be unreliable, prone to accidents and mechanical breakdowns by aircraft. Various types of malfunctions in flight control systems led to at least four accidents. There is evidence of the death of at least one pilot and severely injured another. National Interest notes that this is apparently the result of unsuccessful copying of technology, and suggests that China is seeking to replace fighter jets with promising J-31 as soon as possible.

At the same time, the American publication did not fail to recall that “The Soviet Union and post-Soviet Russia also had the habit of“ acquiring ”Western technology without the consent of the owners, from the atomic bomb to space shuttles”.

This is actually a dubious achievement, an admission that the nation does not have the ability to truly implement its own technology. Given that China has such a habit, there is justice here.
- writes an American magazine, hinting that China has "avenged" Russia for the "theft" of technology from the West. This is despite the fact that in the US they constantly say that the Chinese are constantly stealing technology from them.
Military Reviewin Yandex News
Military Reviewin Yandex Zen
199 comments
Ad