Memorial Day of the Forest Brothers in Latvia. Whatever the holiday, mourning

October 7 2019
43
The other day, Latvian President Egils Levits took the initiative to introduce a new “holiday” - Memorial Day of the national resistance movement. In fact, this is a day of remembrance of the "forest brothers", outright Nazis and criminals. But, given the unremitting trend of modern Latvia, in which nationalist sentiments are not only cultivated, but also paid, you can be absolutely sure that the new date will become official. 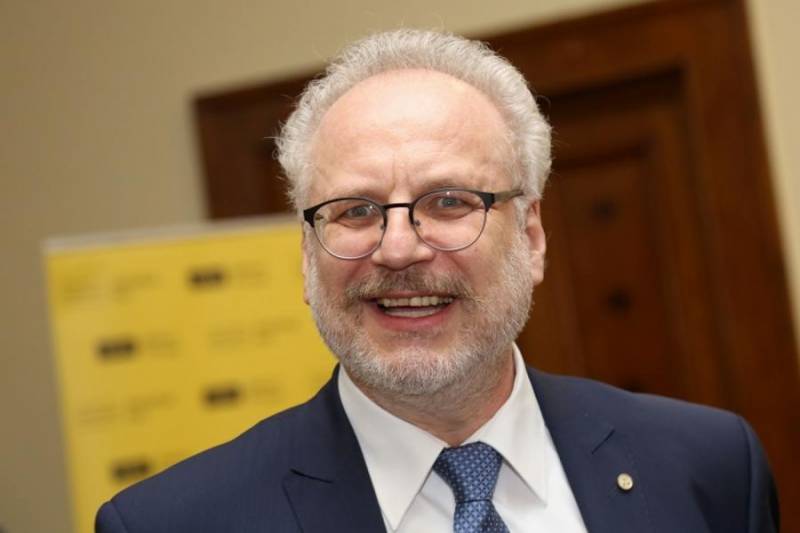 Of course, in the flood of populism they are trying to erode the very concept of “forest brothers”, exposing them as patriots and fighters for all the good against the communists. Therefore, it is better to simply give statistics than to fight sectarian fraternity. So, for the entire time of the existence of "national resistance" these criminals killed over two thousand people. At the same time, about 40% of the crime of the “brothers” is associated with banal robbery and looting. A significant part of those killed were ethnic Latvians, who simply did not share the views of the Nazi henchmen. Among the victims of the executioners were women and children.

And who is the Egils Levits?

As expected for the independent Baltic republics, the current president of Latvia is brought up in the West. Levits was born in the 1955 year in Riga in a "dissident", according to him, family. They tolerated, gritting their teeth, their dissidentism until the 1972 year, until they moved to Germany. Since then, Levits and his family have been “dissident” throughout Europe.

At the same time, Egils, in fact, does not have a higher education. At the University of Hamburg, he never completed a single course. However, as soon as the “big” guest from Europe settled in Latvia, his career went uphill. And soon he was awarded the title of Honorary Doctor of Law of the Latvian Academy of Sciences.

Levits is a patented nationalist who participated in various nationalist movements. But, with all his “love” for Latvia, immediately after returning to his homeland, Egils leaned back to Europe, more precisely to the European Union. Only at the end of May of this year, the Latvian Sejm approved the presidency of Levitsa, returning it to its native land. Well, how could such a distinguished citizen not bring in the initiative to celebrate the Forest Brothers Day? In addition, the Minister of Defense of Latvia, Artis Pabriks, earlier called the Waffen SS members of the Latvian volunteer legion the pride of the people, despite the official condemnation of the Nuremberg in the 1946 year. Thirty years of travel is crowned by another holiday, which will be only a stage in the moral degradation of the Baltic authorities.

Whatever the day, mourning

The calendar of public holidays in Latvia is an interesting thing in itself. The Earth did not see such an officially approved post-traumatic syndrome before the collapse of the Union. Of course, Latvia is not alone in this, Lithuania, Estonia, Ukraine, etc. are breathing in the back of the head. However, Latvia continues to successfully replenish the list of festivals. But even before the "day of the forest brothers" a lot has been done.

So. From the very beginning of the year, residents of this Baltic republic are offered to dress in black. January 20 celebrates the "Memorial Day for the Defenders of the 1991 Barricades of the Year" On this day, all patriotic Latvians should not only remember the "fallen", but also glorify the "victory" over Russia. On the 26 of January, Latvians are given a little dress up, having taken mourning, after all, “International Recognition Day of Latvia”.
But already in March of the 25 number, "Day of Remembrance of the Victims of Communist Terror." And so that May Day would not let citizens depart from the set course, then “Labor Day of Convocation of the Constitutional Assembly of the Republic of Latvia” was “sewn” to Labor Day. 4 of May is "celebrated" "Day of the declaration of the restoration of independence of Latvia."

In order to erase the great date of May 9 from memory of the population, May 8 marks the “Day of Remembrance of the Victims of the Second World War”, and on 9, our Baltic “non-brothers” celebrate Europe Day. 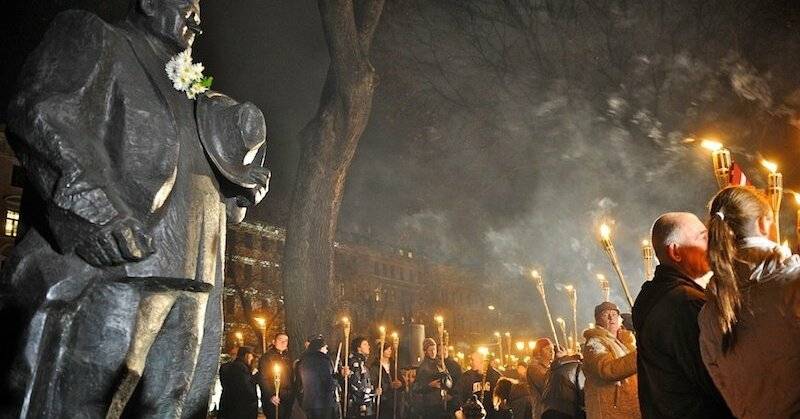 Another torchlight procession at the monument to dictator Ulmanis

On 14 of June, Latvian patriots will again have to dress up in solemn mourning and moan about occupation, because the Day of Remembrance for the Victims of Communist Terror. A simple citizen, it’s true, will think: “Stop, wait a second, because in March it already happened.” And, according to the Latvian authorities, it will be fundamentally wrong, because Russophobia and plaintive moans do not happen much. So, on the 25 of March, Latvians should commemorate those who were exiled to Siberia in the 1949 year, and on the 14 of June, tears will flow over the exiled in the 1941 year.

June in the Latvian calendar is generally a fruitful month. Already on the 17, they are celebrating “Occupation Day of the Republic of Latvia”. Well, if it’s even boring to argue about the "occupation", then a lot of questions arise about the "republic". After all, by the 1940 year, Latvia was quite a normal Eastern European dictatorship, formed after the military coup of Karlis Ulmanis, who appointed himself president, dissolved all parties that were objectionable to him, closed print media and, in fact, crushed the constitution.

On June 22, the Day of Commemoration of the Heroes of the Battle of Cesis begins. According to Latvian historiography, on this day in the 1919 year, the Latvians defeated the German troops. However, in reality, in the battle, the Latvian hastily put together formations together with the Estonian troops defeated Landeswehr, i.e. units of the Baltic German militia.

On July 4, Latvia marks the “Day of Remembrance of the Victims of the Jewish Genocide." The piquancy of this historically determined date is added by the fact that the icon of modern Latvians Ulmanis was actually a standard Nazi dictator. Ulmanis, relying on informal paramilitary groups - Aizsargs, suppressed all dissent, began to infringe on the rights of national minorities (Russians, Jews, Germans), forbade the use of any languages ​​except Latvian, and so on. In addition, as directed by Ulmanis, Latvian diplomats conducted serious research work on the experience of building fascism in Italy. 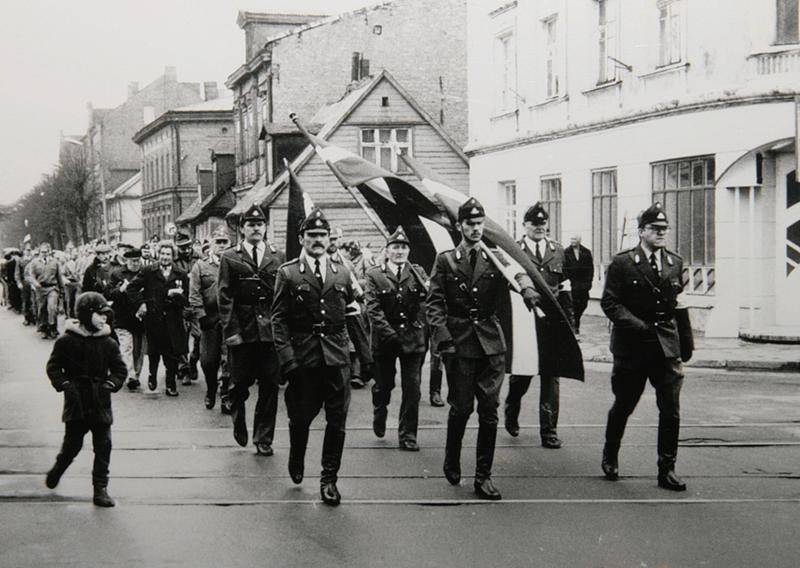 Latvian Aizsargs, Nazi criminals and active participants in the Holocaust during the German occupation

On August 11 they celebrate the “Day of Remembrance of the Latvian Freedom Fighters”. On that day, in the distant 1920 year, a peace treaty was signed between the USSR and Latvia. And on August 21, Latvians celebrate “The Day of Adoption of the Constitutional Law“ On the State Status of the Republic of Latvia ”and the Day of Restoration of Independence of the Republic of Latvia”. Well, citizens do not suffer from tautology.

22 September “Baltic Unity Day”. And here on November 11 is another day of tears and groans - "Memorial Day of the freedom fighters of Latvia (Lachplesis Day)." And after a week-long break, the “Day of the Proclamation of the Republic of Latvia" comes, but even here it cannot do without mourning, because this day is also the day of remembrance of the dead. And, of course, the end of the year in Latvia on a positive basis, and can’t do without Russophobia and anti-Sovietism, therefore, the first Sunday of December was designated as “Remembrance Day for the victims of the genocide of the totalitarian communist regime directed against the Latvian people”. Yes, one more, one more reason to dress up in mourning.

One can only imagine what hellish sizes cockroaches reach in the skull boxes of the so-called Latvian patriots on such fertile propaganda ground. And no less fantastic should be a feeling of constant depression and the number of different complexes in the paradigm of systematic mourning.

The introduction of the next “memory day” is by no means an exceptional event. It’s just another stage of cementing the anti-Russian policy of Latvia, which is not considered by Europe in any other capacity, except as a sanitary cordon. Moreover, the authorities in the Baltics are no longer even home-grown shifters from the former Komsomol members and party workers, but the flowers of a purely European greenhouse. But these simple truths, as usual, will be smeared on the one hand with nostalgia for the past "friendship of peoples", which phantom pains suck out millions from the budget for various joint projects in the hope of finding a common language, on the other hand, optimists will indicate that Latvia has demonstrated its true face, and Europe cannot fail to notice him. But she may not even notice.

We are in Yandex Zen
A great interview with Sergey Lavrov: about Ukraine, Obama and Iran
What you didn't want to know about England
43 comments
Information
Dear reader, to leave comments on the publication, you must to register.