July 11 2012
44
Soviet-Polish war of 1919 - 1920's - black spot on stories Russian-Polish relations and one of the most unpleasant and controversial episodes in the history of Russia 20 century, for many decades to come, determined the nature of relations between the two countries. The theme of the 1919-1920 war is the ground for political speculation within Russia. The unconditional surrender of the national interests of Russia following the results of the First World War by the Bolsheviks, who by definition were defeatists, initially voluntarily distributing the territories of the empire to the right and left and waiting for an imminent “world revolution”, is not a reason to continue to propagate defeatism in our modern society and praise the Poles for the so-called “Miracle on the Vistula” - a victory over the “Red Hydra” near Warsaw in August 1920. 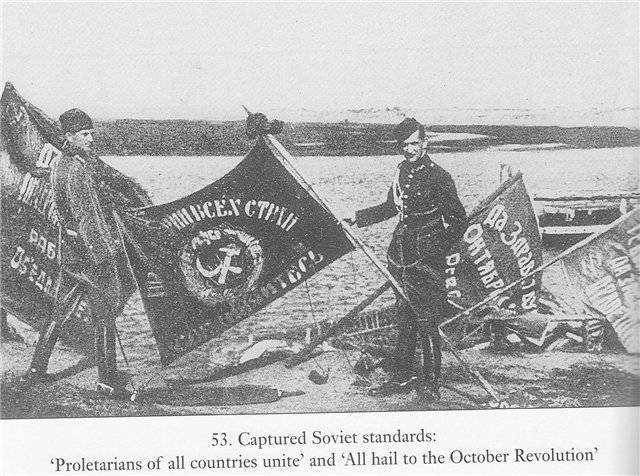 Despite all attempts at historical reconciliation being undertaken by the leaders of the two countries at present, historical grievances continue their destructive action, resulting in various conflicts affecting all spheres of relations between the two peoples and making the western borders of Russian space a direction of constant geopolitical tension.

It is not customary to speak about that war in sublime tones, it is especially not customary to recall it in Russia. In Poland, on the contrary, they actively recall those events, making them a subject of national pride. Despite the well-known international confusion that prevailed in Europe at that time and the desire of certain forces to finally loosen it and plunge it into the chaos of revolutions, one thing is clear - the conflict was initiated from the “other side”. Pilsudski, driven by the desire to restore the Polish-Lithuanian Commonwealth, took advantage of the fratricidal turmoil that began in Russia and the actual disintegration of the country and acted just like its predecessors did in 400 years before - during the time of the other Great Troubles, fixing their gaze on the western territories of Russia - Ukrainian and Belarusian land. That's right: when Russia weakens on its outskirts, the so-called national liberation movement immediately rises. The outskirts of the empire go out of control and fall under the influence of the great-power neighbors, who traditionally considered their territories as theirs, not Russian, and there is no reason to speak of any “national interests of the Ukrainian people”. It is absolutely impossible to present a truly independent Ukrainian or Belarusian state as part of the reunited Polish-Lithuanian Commonwealth or at least in the neighborhood of it - such a number goes only with the Bolsheviks craving power and perhaps with the liberals of the new Russia. Pilsudsky’s great-power chauvinism is no different from a similar Russian. As such, there is nothing negative about it. The idea of ​​restoring imperial statehood in one form or another is the normal pursuit of a normal great power, which Poland once was, and in essence, continues to be, since it preserves the corresponding national ambitions and the comprehensive ideological basis of its expansionist policies, developed over the centuries.

So, we turn to the events of the Soviet-Polish war 1919 - 1920. The first clashes of the Red Army with the Polish military formations began in February 1919. While the future of Soviet power was in question, the Poles took a wait and see attitude. When by the beginning of 1920, the final victory of the Bolsheviks became apparent, large-scale hostilities began.

The Bolshevik leadership, delirious with the idea of ​​a world revolution, was ready to order the start of the march into Europe through the territory of Poland. The Soviets hoped that the Polish working class would join the ranks of the Red Army. Pilsudski had completely different, more pragmatic plans, which have already been described above. 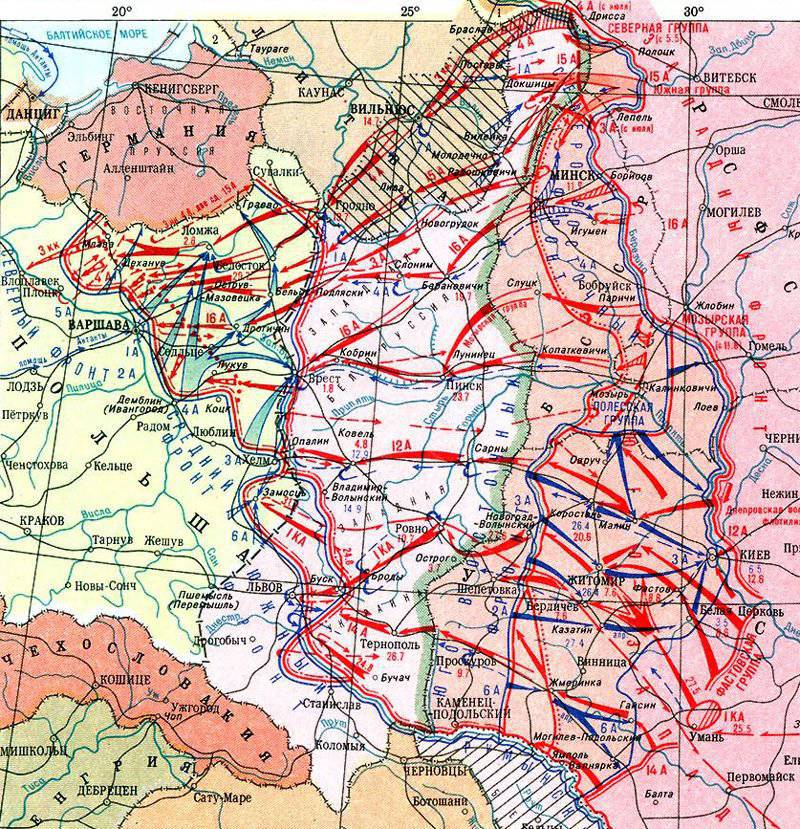 Pilsudski was undoubtedly a visionary statesman with a clear strategic mindset. Realizing that the one-stage restoration of a large Poland within the borders of 1772 of the year (before the Dnieper) would be impossible, in April of 1920 of the year he made an alliance with the head of the Ukrainian nationalists Simon Petlyura. According to the agreement of the two figures, the Polish government recognized the independence of Ukraine, and Petliurists turned a blind eye to the withdrawal of Eastern Galicia and Western Volyn to Poland. This deal and untied the Poles.

The Polish army seized the initiative from the very beginning of hostilities. Already in May, the Poles came to the Dnieper, seizing Kiev and Minsk. The Red Army responded with the creation of two organized fronts — the Western, which operated in Belarus under the command of Tukhachevsky, and the South-Western, which operated in Ukraine under the command of Yegorov. Kiev and Minsk were liberated in the same month, and by the beginning of June the entire territory of Ukraine and Belarus, including their western regions, was liberated from the Polish troops. In mid-July 1920, the Bolshevik leadership decided to continue the offensive in Poland itself. A Polish Soviet government was created under the authority of Felix Dzerzhinsky and Julian Markhlevsky.

And so, in August, Tukhachevsky approached Warsaw, and the country's leadership decided not to merge the two fronts into one. The commander decided to make a workaround, and then suddenly from the rear Poles under the command of Pilsudski attacked the Red Army near the town of Radzivin. Began a two-week operation, called "The Miracle on the Vistula."

As a result of this operation, the western front of Tukhachevsky was crushed, 45000 people were interned by the Germans, 25000 Red Army men were killed, and 60000 were captured. All these figures are approximate, as until now, historians have not been able to find a sufficient number of reliable historical sources that would allow more accurate losses in the ranks of the Red Army. Unfortunately, for obvious reasons, practically no attention was paid to the historical science of our country by the Soviet-Polish war, and only in recent decades it began to be studied more actively. However, here, as we have said before, history often falls prey to politics. The events of that ridiculous and extremely cruel war are too difficult to interpret unambiguously and unbiasedly because of their inconsistency and obvious ugliness. 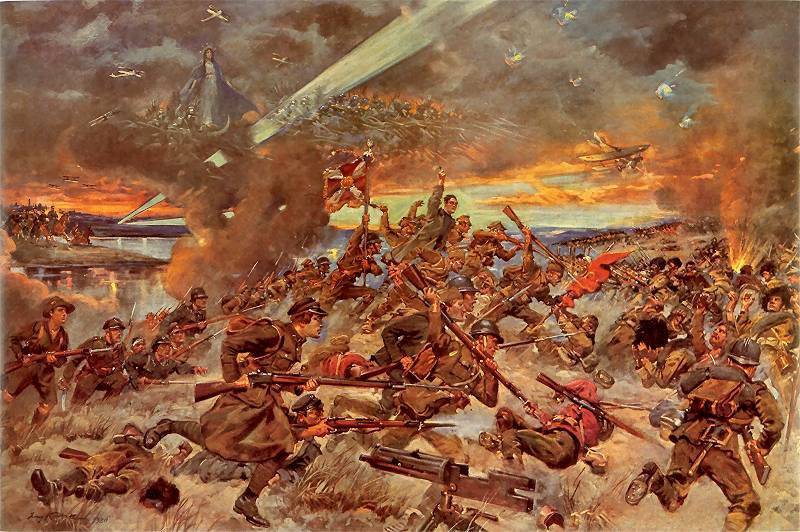 Crimes took place on both sides, and this was a new cause for conflict. The position of the captured Red Army soldiers in the Polish camps and the high mortality rate began to be set against the events that occurred in Katyn. It is believed that they were subjected to torture and mass executions, with the result that few managed to survive. In response to these accusations, Polish historians claim that the heavy losses among the prisoners are explained by the fact that the camps were not ready for such a number of soldiers. At the time of the defeat, many of them were sick with typhus, smallpox, and dysentery, spreading among large concentrations of prisoners of war in conditions far from all sanitary standards. The bullying of sadistic wardens and executions is refuted by the Polish side, but it is not always taken into account by Russian politicians who admit that executions in Katyn are the answer of the Soviet side to these events.

In recent years, dates connected with the history of that war, and especially the anniversary of the “Miracle on the Vistula” are actively celebrated in Poland. Celebration of anniversaries, films about the genius Pilsudski and the installation of monuments to wars who died in the Soviet-Polish war are actively used by Polish politicians during election campaigns. And the point here is often not only in the special national pride of the Poles and respect for their history, but in the commonplace exploitation of Russophobia and Soviet phobia. The distinction between these two concepts has not been drawn, which means that the end in the historical confrontation between the two Slavic powers has not yet been made. Russophobia-Soviet phobia continues to be the main obstacle to genuine historical reconciliation between the two powers. And we, and the Poles, must finally throw off all the insults and call things by their names, having analyzed the objective causes of past conflicts and their terrible consequences. In the meantime, not only the Poles, but we ourselves do not know where the border separating the concepts of "Russian" and "Soviet", and whether it exists, we can not decide what all the same was Bolshevism, and what role he played in the development of the country and the world, who Lenin is, and who we are the saviors of the world, the highly spiritual God-bearing people or the evil empire, holding a nuclear club in its hands and mired in dictatorship, corruption, crime, general ignorance and drunkenness. Such is our story - our greatest wealth and terrible burden ...