23 September 2019
24
We have repeatedly talked about the Center-2019 exercises. An event of this magnitude is of worldwide interest. Moreover, interest is not only in terms of reviewing the preparedness of troops, but also in terms of the likely distribution of forces in the event of military conflicts in the region. It is no coincidence that at such exercises one can often see not only the military leadership of the participating countries, but also the heads of state and government. 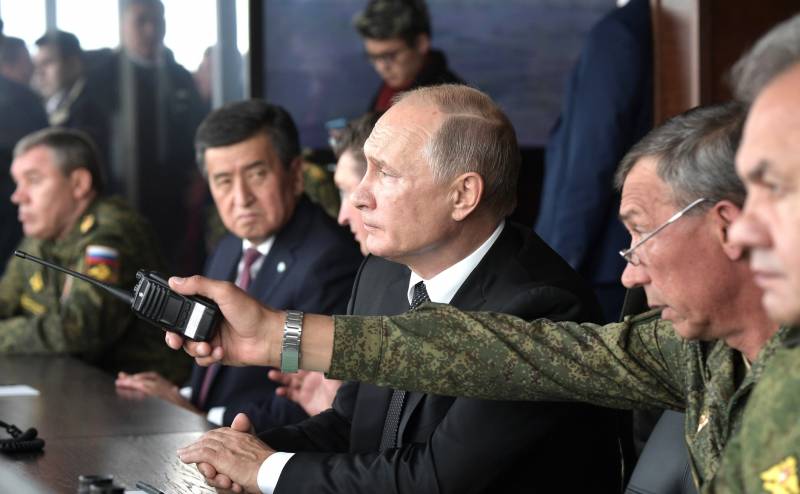 The Center-2019 exercises were no exception. On 20 of September, Russian President and Kyrgyz President Sooronbai Jeenbekov flew to Orenburg. Officially, the visit of the presidents is explained by the desire to personally see the work of units of their own army as part of a multinational coalition, but everyone understands that Putin and Jeenbekov were talking not only about the problems of the army.

In war as in war

What did we see at the Center command-and-staff exercises during these five days? The television picture was really beautiful. Practical shooting from various types of weapons, object seizures, landing. Joint work of army units of different countries in the performance of a combat mission ...

But the task of the exercises was somewhat different. KShU are primarily carried out to train troops. And in this case, when the armies of eight countries participate in the exercises, the task expands even more. It is necessary to coordinate the actions of the headquarters of different countries. Work out the joint actions of these headquarters in the performance of a single task.

Let me remind you that the military personnel of Russia, China, Kazakhstan, India, Pakistan, Kyrgyzstan, Tajikistan and Uzbekistan took part in the maneuvers. 128 thousand military personnel, 20 thousand units of equipment, almost 600 aircraft of various systems and 15 support vessels. Agree, the scale is impressive. 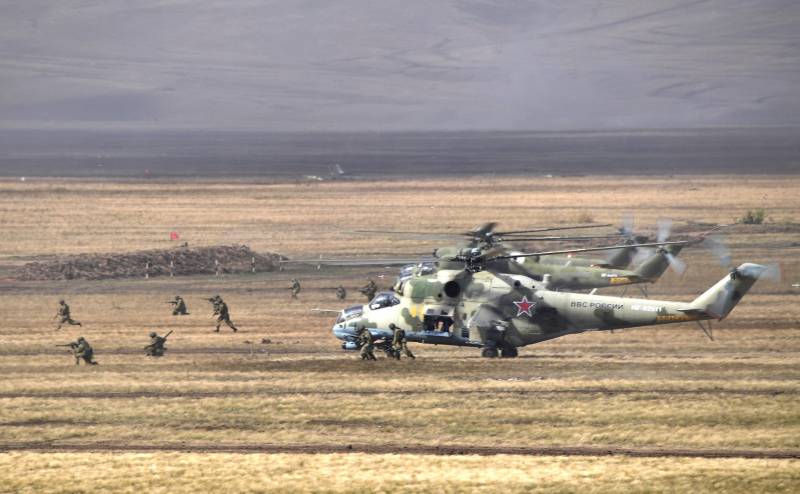 I would like to recall the legend of the teachings. Islamists are trying to establish a terrorist regime in a friendly country, in short. For those who monitor the situation in the region, it is clear that this is a fairly realistic scenario.

The Taliban movement (banned in the Russian Federation) today feels quite comfortable in northern Afghanistan. In particular, most recently they attacked Kunduz. Moreover, there is evidence that the Taliban already controls some sections of the border with Tajikistan. And this is actually a direct route not only to Tajikistan, but also to Uzbekistan, Kyrgyzstan and further to Kazakhstan.

For some politicians, the stability of this region is like a bone in their throat. So the maneuvers for the troops are practical. Some units defend their own country, their own people, others cover the possible paths of the attack of the enemy, and others destroy the enemy. The soldier and officer should not only theoretically represent his opponent, but also understand the principles of warfare that he applies.

It is clear that the leading roles in maneuvers are played by Russian and Chinese units. This is due not only to the number of personnel and equipment provided by these countries for the exercises, but also to the very role of Russia and China in the region. Only armies of powerful states can really resist and destroy Islamists in full. And both armies possess experience in the struggle against Islamists, albeit to a different degree.

In general, the military part of the exercises was quite productive. To evaluate the actions of individual commanders and commanders, units and subunits is not our business. To do this, there is a higher command and leaders of the participating countries. I think we will soon learn about the assessments from the respective ministries of defense.

For Russia, units of the Russian army, in principle, there was almost nothing new in the exercises. The bloody experience of the war in Afghanistan has been studied, comprehended. Parts located in close proximity to hazardous areas practice these activities continuously. But for the armies of other countries, this is really combat work in difficult, unfamiliar circumstances.

I would like to end the story about the military part of the exercises with the words of the commander of the Central Military District of the Armed Forces of the Russian Federation Alexander Lapin, which he said before the exercises:
“We learned to understand each other faster, to overcome language and technical barriers. “The goal of our official and combat activity remains unchanged - the fight against world-class evil: terrorism, extremism and separatism.” 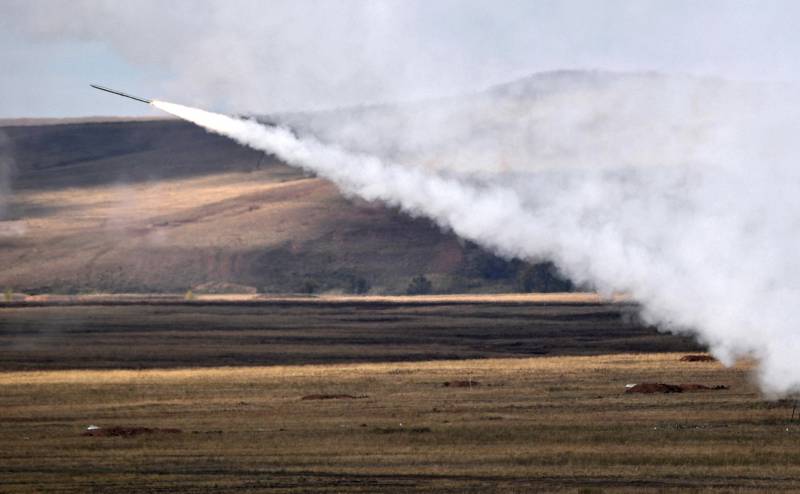 How soldiers defended their homeland

Perhaps for some readers this sounds strange. Defend the Motherland in the war. Learning to protect in exercises. I admit the correctness of this point of view. They really study in the exercises. But the teachings are always closely watched not only by friends, but also by enemies. And this or that decision of the opposite side often depends on how the units and formations show themselves in exercises.

The first thing you should pay attention to is the training of troops participating in maneuvers. Any commander is well aware that fighting against well-trained soldiers is many times more difficult than against a militia or recruits. I wrote about this above. Both the headquarters and units worked out efficiently.

Now the second. We somehow pay little attention to the foreign policy part of the teachings. Although any of us can quite reasonably explain the correlation of forces and the likelihood of a military victory in the event of the creation of a coalition of several states. Here is what the Chinese newspaper Jemin Ribao wrote about this:
"The participation of the Chinese military in the exercises testifies to the deep cooperation between the Chinese and Russian armed forces in the joint operation, as well as the trials and experience that are important to increase the ability of Chinese commanders to cooperate."

Yes, Chinese journalists write about the importance of cooperation with Russia for China. But, you must admit, such cooperation is no less important for Russia. Yes, we have left the Soviet black and white vision of the very concept of “cooperation”. An understanding has come that any country first of all solves its own foreign policy tasks. But to solve these problems at this historical stage, it is simply necessary to cooperate with those whose tasks are similar. China and Russia today confront the global West, led by the United States.

But this is not Russia's last victory at the Center-2019 exercises. Take a closer look at the list of participating countries. Units of India (140 people) and Pakistan (90 people) participate in the exercises!

And this despite the fact that since February of this year, these countries have been conflicting because of the special status of the states of Kashmir and Jammu. Moreover, this conflict has repeatedly led to casualties on both sides.

Yes, while it is impossible to talk about the possibility of reconciliation of these countries. Yes, and this is not the task of military exercises. However, joint participation in such events gives hope for a mitigation of the conflict. Soldiers can negotiate faster than diplomats and politicians.

Let us not forget that India and Pakistan have long been no longer “whipping boys”. The armies of these countries are quite strong and possess all types of modern weapons. And the Indian economy today has become a global factor.

The participation of India and Pakistan gave Center-2019 maneuvers a completely different status. If last year at the Vostok-2018 exercises the concern was caused by the participation of the Chinese army, then this year, when China and Russia were already accustomed to cooperation, the heads of Western generals fell ill from India and Pakistan. A possible increase in cooperation between us will seriously strengthen both Russia and India.

In general, speaking of the past exercises of Center-2019, we can conclude that the task was completed in full. Both in the military and in the political sense. You can find flaws, "jambs", inconsistencies everywhere. I’m sure that someone didn’t do something in these exercises either.

It does not happen that a huge mechanism works flawlessly. At least one "screw", at least one "nut" someone "does not tighten." Relevant conclusions will be drawn. However, in general, the machine works and performs the tasks that it should. And this is the main point!