18 September 2019
109
The slipway assembly of the first prototype of the new wide-body airliner Il-96-400М was completed at the Voronezh Aircraft Plant (VASO). It is reported by RIA News with reference to the press service of the Aviation complex named after S.V. Ilyushin. 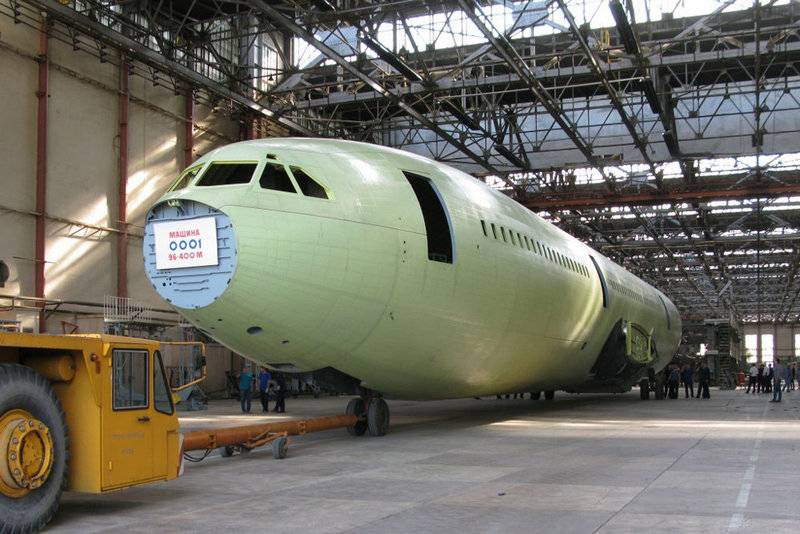 According to the report, the first IL-96-400М prototype went through the slipway assembly stage and will be moved to the final assembly workshop, where its construction will continue, which is planned to be completed by the end of next year. After the construction is completed, the aircraft will be handed over for the phase of ground and flight tests. The first flight of the new aircraft is scheduled for 2021 year. The first production aircraft Il-96-400М is planned to be released in the 2023 year.

The construction of the aircraft is planned to be completed by the end of the 2020 year, after which it will be handed over to Ilyushin specialists for ground and flight tests. The first flight of the prototype is scheduled for 2021 year
- said in a statement.

As previously reported, the wide-body IL-96-400M aircraft is created on the basis of the serial IL-96 entirely from Russian components. Compared to its predecessor, the new aircraft has a longer elongated fuselage and new more powerful PS-90A1 engines instead of PS-90A. Depending on the layout of the cabin, he will be able to take on board up to 400 passengers. According to the developers, in many ways, including cost-effectiveness, reliability and safety, the IL-96-400M will be compared with the best Western counterparts.