A year later, Ford can move, now the problem is in the elevators

August 14 2019
55
After more than 12 months of repair work, the U.S. Navy re-accepted the power plant designed for the latest American aircraft carrier fleet "Gerald R. Ford." Now she again has to undergo testing as part of an operational deployment. This was stated in the military department of the country. 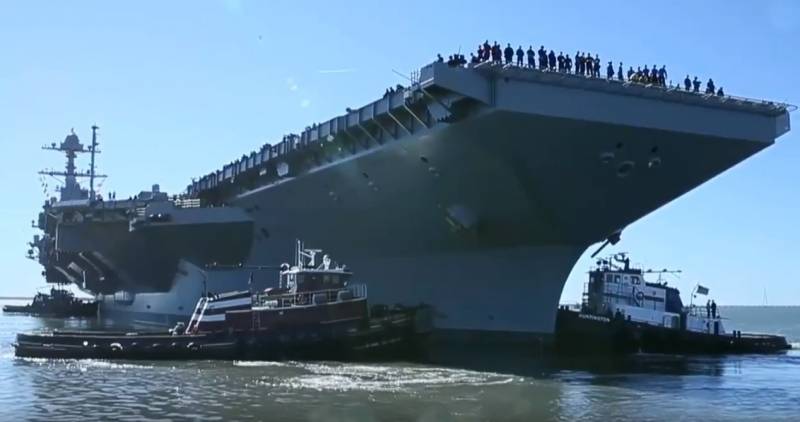 100 The 000-ton warship is the largest and most expensive Navy ever made; its value amounted to 13 billion dollars, at least by 20% exceeding the originally projected expenses. Energy is generated by two nuclear reactors powered by A1B uranium fuel. According to estimates by the World Nuclear Association, 25 reactors are% more powerful than those used on aircraft carriers of the Nimitz type.

It is noted that it took 400 000 man-hours to correct the defect of the ship's propulsion system, which was allegedly committed at the manufacturing stage, and not caused by inadequate operation. The problem was that the steam generated during the operation of the reactors did not rotate the screws.

However, engines are not everything that keeps Ford at a mooring. Only two of the 11 elevators operate, designed to deliver ammunition to the flight deck, which should equip aircraft-carrier-based aircraft. According to the publication Sputnik, apparently, before the transfer of the ship of the Navy, scheduled for October, this flaw will not be eliminated.
Military Reviewin Yandex News
Military Reviewin Yandex Zen
55 comments
Ad